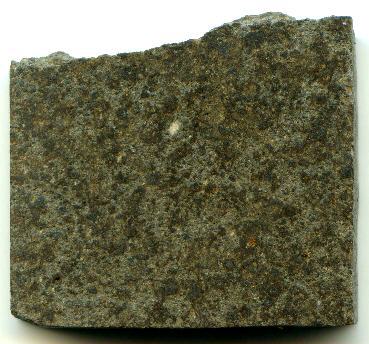 Found 1970
24° 50′ N., 31° 40′ E. Five stones with black, bubbly crustOutermost layer of a differentiated planet, asteroid or moon, usually consisting of silicate rock and extending no more than 10s of km from the surface. The term is also applied to icy bodies, in which case it is composed of ices, frozen gases, and accumulated meteoritic material. On Earth, the were found by a member of the Geological Survey of Egypt in a farm field on the Nile River near Luxor. Today only a single 23 kg specimen remains preserved.

Diagram credit: M. M. M. Meier et al., Earth and Planetary Science Letters, vol. 490 (2018)
‘Cosmic history and a candidate parent asteroid for the quasicrystal-bearing meteorite Khatyrka’
(https://doi.org/10.1016/j.epsl.2018.03.025) Isna has an average porosityThe volume percentage of a rock that consists of void space. Vesicular porosity is a type of porosity resulting from the presence of vesicles, or gas bubbles, in igneous rock such as the pumice presented here. Vesicular porosity is very rare in meteorites and is often associated with slag, one of 14.5% (Macke et al., 2011). For additional information on the formation of the CO chondrites and their metamorphic heirarchy, visit the Colony page. The specimen of Isna shown above is a 4.5 g partial slice.