Skip to content
representative presently unknown Mercury is an igneous, differentiated planetary body thought to have undergone initial crystallizationPhysical or chemical process or action that results in the formation of regularly-shaped, -sized, and -patterned solid forms known as crystals. 3.7–4.4 b.y. ago. Specific features attributed to mercurian meteorites have been proposed by meteoriticists in many published works, from which some pertinent information is presented here. These publications include the following (arranged by date):

It is accepted that impact ejecta from the surface of Mercury would be able to escape the planet’s gravityAttractive force between all matter - one of the four fundamental forces. well at a launch speed of 4.2 km/sec, compared to 5.0 km/sec for Mars and 2.4 km/sec for the Moon. However, to reach a heliocentricCentered around a sun. Our own Solar System is centered around the Sun so that all planets such as Earth orbit around the Sun. Note that 25% of Americans incorrectly believe the Sun revolves around the Earth. orbitThe elliptical path of one body around another, typically the path of a small body around a much larger body. However, depending on the mass distribution of the objects, they may rotate around an empty spot in space • The Moon orbits around the Earth. • The Earth orbits around and complete a journey to Earth the material has to have an ejection speed about twice the escape velocityVelocity that an object needs to escape the primary gravitational influence of a more massive object: where, m = the object's mass, r = distance from object's center, and G = gravitational constant of the larger object.. After escaping the Sun’s gravity well, the meteoroidSmall rocky or metallic object in orbit around the Sun (or another star). must avoid destruction through collisions with dust-sized particles falling sunward, and overcome orbital collapse due to Poynting-Robertson drag. Accounting for these additional factors, the eventual transfer to an Earth-crossing orbit would require an initial ejection velocity of ~6.2 km/sec (Wetherill, 1984). It has been shown that most Mercurian ejecta would have speeds of 10–30 km/s.

In Gladman (2003), Gladman and Burns (1996), and Gladman et al. (1996), it was determined through numerical simulations that a small flux of Mercurian meteorites to Earth should be possible. They concluded that 30–65% of ejected material would be re-accreted to Mercury in 10 m.y. (75% in 50 m.y.). During that time frame, a portion of the ejected material would make the journey to a Venus-crossing orbit, where 5–10% of that material would be accreted. After many close encounters with Venus, some material would be efficiently delivered to an Earth-crossing orbit. When all is considered, ~0.1% of the material initially ejected from Mercury would accrete to Earth during a time frame of 10 m.y. In similar studies by Wetherill (1984) and Love and Keil (1995), they calculated that the Earth intercept percentage is lower by a factor of ten; i.e., only 0.01% of the material initially ejected from Mercury would accrete to Earth during a time frame of 2–10 m.y. In contrast, Gladman (1996) determined that 0.5% of Mercurian material would accrete to Earth in a time frame of 50 m.y. Additional results were compiled by Melosh and Tonks (1993), who employed an orbital evolution model to analyze a statistically significant number of particles. Their model demonstrated that almost all of the Mercurian ejecta was either re-accreted to Mercury in a median time frame of ~30 m.y., or that it was collisionally destroyed, with only a very small fraction of the ejecta impacting Venus. Surprisingly, their model also predicted that ~30% of ejecta from Venus should impact Earth in a median time frame of ~12 m.y., which, with other considerations aside, suggests a higher likelihood of finding a venusian meteoriteWork in progress. A solid natural object reaching a planet’s surface from interplanetary space. Solid portion of a meteoroid that survives its fall to Earth, or some other body. Meteorites are classified as stony meteorites, iron meteorites, and stony-iron meteorites. These groups are further divided according to their mineralogy and than a Mercurian meteorite. The most recent study of the transfer of Mercurian impact ejecta to Venus and Earth or its re-accretion to Mercury has been conducted by Gladman and Coffey (2009). They utilized numerical calculations of particles to simulate impact-generated ejections from Mercury. In this new study it was determined that previous estimations of impacts onto Mercury were too low, and that higher impact speeds of 20–70 km/s are more realistic. Therefore, according to theory, the ejection velocities used for the simulations were in the range of 4–25 km/s, and the particles were followed over a period of 30 m.y. The transfer efficiency of the ejected meteoroids for various ejection velocities which had sizes of a decimeter or larger were derived. Overall, 50% were re-accreted to Mercury in 30 m.y., and 15% more over the succeeding 30 m.y. The cumulative accretionAccumulation of smaller objects into progressively larger bodies in the solar nebula leading to the eventual formation of asteroids, planetesimals and planets. The earliest accretion of the smallest particles was due to Van der Waals and electromagnetic forces. Further accretion continued by relatively low-velocity collisions of smaller bodies in the to Venus was 20%. The cumulative accretion to Earth over the same 30 m.y. for all ejection velocities studied was determined to be 2–5%. The lower ejection velocities (4 km/s) and shorter timeframes (10 m.y.) produce efficiencies that are in agreement with previous studies; the increased velocities (up to ~20 km/s) and extended timeframe (30 m.y.) account for the higher accretion efficiency, about half that of Mars efficiencies.

Indicators of a Mercurian Meteorite

A mercurian meteorite would presumably be an achondrite and would most likely be mistaken for an aubriteAubrites are named for the Aubres meteorite that fell in 1836 near Nyons, France. They are an evolved achondrite that is Ca-poor and composed mainly of enstatite (En100) and diopside (En50Wo50) with minor amounts of olivine (Fa0) and traces of plagioclase (An2-8).  They contain large white crystals of enstatite as or an anorthositic lunaite. However, aubrites are inconsistent with a mercurian origin because of their sheer numbers in our collections, and also because of their lack of agglutinates, their high content of solar-wind-implanted gases, and their content of FeNi-metal retaining chondritic trace element abundances. Furthermore, Burbine et al. (2002) estimated that a basaltic crust on Mercury composed of a reduced, aubrite-like mineralogy should have a relatively flat spectra rather than the extremely red spectra actually seen on Mercury. This reddening is thought to be due to space weathering in which micrometeoriteMeteorite so small that it falls to Earth essentially unchanged from how it existed in space. If a meteoroid entering the Earth's atmosphere is sufficiently small (generally less than 10-6 m), it will be slowed by collisions with molecules in the upper atmosphere to a degree where ablation does not impacts and solar windSupersonic flow of high-speed charged particles continuously blowing off a star (mostly e- and p+). When originating from stars other than the Sun, it is sometimes called a "stellar" wind. The solar wind may be viewed as an extension of the corona into interplanetary space. The solar wind emanates radially particle sputtering produce nanophase iron coatings on surface materials. This high amount of space weathering on Mercury would require reductionOxidation and reduction together are called redox (reduction and oxidation) and generally characterized by the transfer of electrons between chemical species, like molecules, atoms or ions, where one species undergoes oxidation, a loss of electrons,  while another species undergoes reduction, a gain of electrons. This transfer of electrons between reactants of a much higher amount of FeO than that which would be present given an aubritic, enstatite basaltic crust. 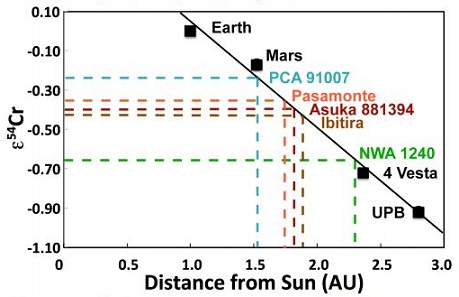 Diagram credit: Sanborn and Yin, 45th LPSC, #2018 (2014) A methodical and systematic analysis of the delivery criteria for a mercurian meteorite was presented by W. Vaughan and J. Head (2014), with reference to current improved data obtained by the MESSENGER spacecraft. In lieu of providing a synopsis of their conclusions here, their concise LPSC abstract is best read in its entirety. Although the transfer dynamics of ejecta from Mercury to Earth are more complex than delivery from Mars, the probability of finding a Mercurian meteorite may be higher than once thought. Perhaps several samples are already in the worldwide collections but have not yet been recognized as such. Indeed, it may even be possible to find venerian (Venus) meteorites and terrene/terran (Earth) meteorites, but their recovery is less likely because of other constraining factors such as a high escape velocity, a thick atmosphere, and a short (m.y.) time frame for re-accretion (Gladman and Chan, 2012). !NEWSread more >>