PallasiteOne of two main classes of stony-iron meteorite, the other being mesosiderites. Pallasites are igneous in nature and characterized by crystals of olivine, sometimes peridot (green gem quality clear olivine crystals), embedded in a matrix of Fe-Ni metal. The type specimen, weighing 680 kg, was found in the mountains near, MG (main-group), anomalous metalElement that readily forms cations and has metallic bonds; sometimes said to be similar to a cation in a cloud of electrons. The metals are one of the three groups of elements as distinguished by their ionization and bonding properties, along with the metalloids and nonmetals. A diagonal line drawn composition
high-Δ17O subgroup (see details on the Imilac page)

Found 1924
22° 22′ S., 135° 46′ E. The first transported specimen of 1,084 g was found at Alice Springs, Northern Territory, Australia. In July 1937, the main massLargest fragment of a meteorite, typically at the time of recovery. Meteorites are commonly cut, sliced or sometimes broken thus reducing the size of the main mass and the resulting largest specimen is called the "largest known mass". of 1,411 kg was found where it had been lying for thousands of years, surrounded by 900 kg of iron shale. Most of the material had been residing at depth and has been terrestrially weathered to the point that the nickel-iron matrixFine grained primary and silicate-rich material in chondrites that surrounds chondrules, refractory inclusions (like CAIs), breccia clasts and other constituents. is transformed into hematiteFe-oxide mineral (Fe2O3) that may be the major cause of the red color on Mars. Coarser-grained gray hematite has the same chemical formula as the red variety, but a different crystalline structure. Deposits of gray hematite found in the Terra Meridiani region of Mars may suggest that water once circulated and magnetiteFe oxide, Fe2+Fe3+2O4, containing oxidized iron (Fe3+) found in the matrix of carbonaceous chondrites and as diagnostic component in CK chondrites. In CK chondrites, magnetite is typically chromian, containing several wt. % Cr2O3.. The olivineGroup of silicate minerals, (Mg,Fe)2SiO4, with the compositional endpoints of forsterite (Mg2SiO4) and fayalite (Fe2SiO4). Olivine is commonly found in all chondrites within both the matrix and chondrules, achondrites including most primitive achondrites and some evolved achondrites, in pallasites as large yellow-green crystals (brown when terrestrialized), in the silicate portion crystals are intact and of high iron content.

Huckitta is one of a small number of main-group pallasites with anomalous elemental abundances. It has very high Ge and Ga contents, and elevated Pt, W, and Ir (Wasson and Choi, 2003). It also has a lower AuThe astronomical unit for length is described as the "mean" distance (average of aphelion and perihelion distances) between the Earth and the Sun. Though most references state the value for 1 AU to be approximately 150 million kilometers, the currently accepted precise value for the AU is 149,597,870.66 km. The content than most other main group members. Formation scenarios and classification schemes for the main-group pallasites can be found on the Imilac page. The photo above shows a 15.3 g oxidizedOxidation and reduction together are called redox (reduction and oxidation) and generally characterized by the transfer of electrons between chemical species, like molecules, atoms or ions, where one species undergoes oxidation, a loss of electrons,  while another species undergoes reduction, a gain of electrons. This transfer of electrons between reactants partial slice (right) and a much rarer 5.5 g unoxidized end section (left) that has escaped transformation into hematite likely due to its location nearer to the surface. The excellent photo below is a large etched, unoxidized slice exhibiting the typical distribution of silicateThe most abundant group of minerals in Earth's crust, the structure of silicates are dominated by the silica tetrahedron, SiO44-, with metal ions occurring between tetrahedra). The mesodesmic bonds of the silicon tetrahedron allow extensive polymerization and silicates are classified according to the amount of linking that occurs between the and metal in Huckitta, shown courtesy of Sergey Vasiliev. 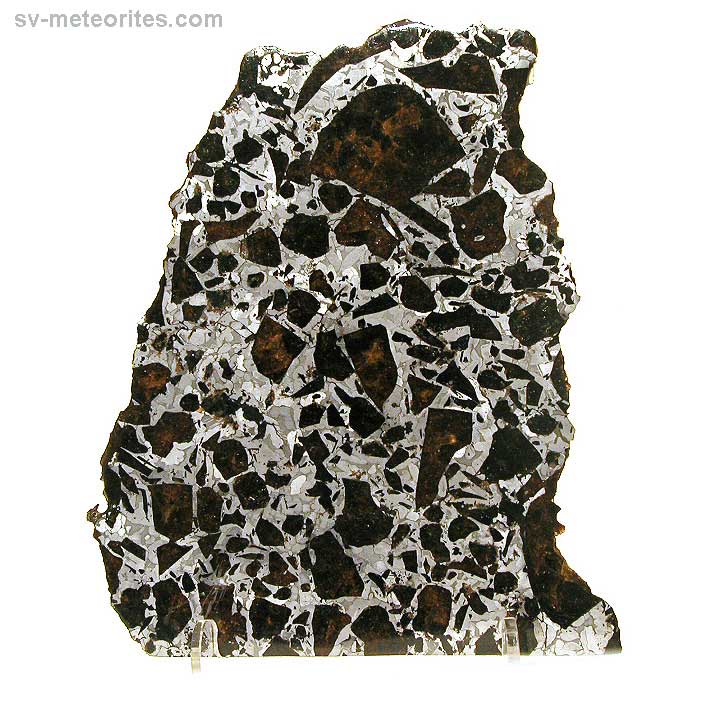