EL-chondrite, Impact-Melt Rock
(EL6/7 in MetBull 54)
(Primitive Enstatite AchondriteUsed in past as synonym for Aubrites. Present definition from the Meteoritical Bulletin states that this rare class is an "enstatite-rich  achondrite  that has not yet been classified into a group". [Pilski et al., 2011]) 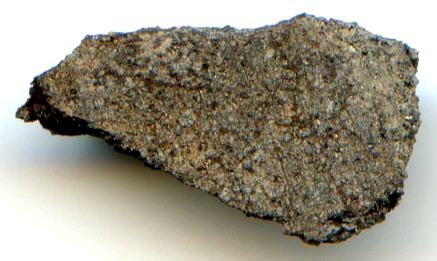 Found 1971
34° 48.1′ N., 101° 34′ W. A single mass of ~16.3 kg was plowed up on the R. L. Grigsby farm about 2 km northwest of Wayside, Texas. Current chemical, petrologic, and isotopic studies have classified Happy Canyon as a member of the EL-chondrite parent bodyThe body from which a meteorite or meteoroid was derived prior to its ejection. Some parent bodies were destroyed early in the formation of our Solar System, while others like the asteroid 4-Vesta and Mars are still observable today.. It was impact-melted ~4.53 b.y. ago from a metamorphosed rock of petrologic typeMeasure of the degree of aqueous alteration (Types 1 and 2) and thermal metamorphism (Types 3-6) experienced by a chondritic meteorite. Type 3 chondrites are further subdivided into 3.0 through 3.9 subtypes. 6 or less, cooling rapidly from a temperature of 1425°C due to the incorporation of cold clastic material (fine-grained lithology). During this impact-melt event Ar and other volatile elementsChemical elements that condense (or volatilize) at relatively low temperatures. The opposite of volatile is refractory. Volatile elements can be divided into moderately volatile (Tc = 1230–640 K) and highly volatile (Tc < 640 K). The moderately volatile lithophile elements are: Mn, P, Na, B ,Rb, K, F, Zn. The moderately were degassed. The older I–Xe chronometer referencing an age of ~4.565 b.y. attests to the fact that this chronometer was not reset during metamorphism (Bogard et al., 2010). After solidification, the entire rock was impact-shocked to stage S2, causing undulatory extinctionIn astronomy, the dimming of starlight as it passes through the interstellar medium. Dust scatters some of the light, causing the total intensity of the light to diminish. It is important to take this effect into account when measuring the apparent brightness of stars. The dark bands running across portions of enstatiteA mineral that is composed of Mg-rich pyroxene, MgSiO3. It is the magnesium endmember of the pyroxene silicate mineral series - enstatite (MgSiO3) to ferrosilite (FeSiO3)..