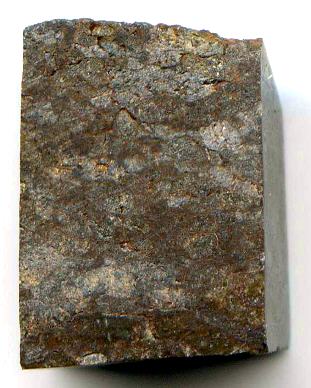 Found ~1958
19° 55′ N., 56° 15′ E. A single stone weighing 596 g was found during oil prospecting in the Hajmah area (formerly known as the Haima oil bore) in Oman before 1958. This ureilite is distinct from two L chondritesChondrites are the most common meteorites accounting for ~84% of falls. Chondrites are comprised mostly of Fe- and Mg-bearing silicate minerals (found in both chondrules and fine grained matrix), reduced Fe/Ni metal (found in various states like large blebs, small grains and/or even chondrule rims), and various refractory inclusions (such found in the same area at that time designated Hajmah (b) and (c). Current models of ureilite formation are presented on the Kenna page.

In an attempt to identify possible common ejection events among the ureilites, Beard and Swindle (2017) conducted a comparative study of 39 different samples utilizing three parameters: CRE age, Fo content in olivineGroup of silicate minerals, (Mg,Fe)2SiO4, with the compositional endpoints of forsterite (Mg2SiO4) and fayalite (Fe2SiO4). Olivine is commonly found in all chondrites within both the matrix and chondrules, achondrites including most primitive achondrites and some evolved achondrites, in pallasites as large yellow-green crystals (brown when terrestrialized), in the silicate portion (Mg#), and Δ17O value. They resolved ten potential clusters, several of which show concordance in their CRE age and Mg# but not in Δ17O value (heterogeneous), and three that are concordant in all three parameters (homogeneous). One of the seven potential heterogeneous clusters reflects an ejection event that occurred 1.3 (±0.3) m.y. ago and comprises Hajmah (a) and ALH 82130. Infrared spectra of Hajmah (a) is similar to that observed by NASA’s Spitzer Space Telescope of the debris disk surrounding the evolving young starSelf-luminous object held together by its own self-gravity. Often refers to those objects which generate energy from nuclear reactions occurring at their cores, but may also be applied to stellar remnants such as neutron stars. HD 179218, just as the ureilite Sahara 99201 is a good match to the debris disk surrounding the 16 m.y. old star HD 113766 (Morlok et al., 2007)—the onset of impact processing within these stars’ disks might be inferred. The specimen of Hajmah (a) shown above is a 2.2 g cut fragment with fusion crustMelted exterior of a meteorite that forms when it passes through Earth’s atmosphere. Friction with the air will raise a meteorite’s surface temperature upwards of  4800 K (8180 °F) and will melt (ablate) the surface minerals and flow backwards over the surface as shown in the Lafayette meteorite photograph below. on one end.