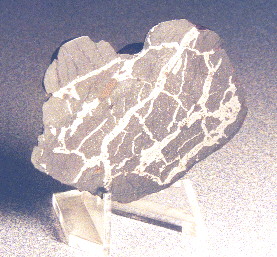 Found 1891 Studies have shown that trace elementSubstance composed of atoms, each of which has the same atomic number (Z) and chemical properties. The chemical properties of an element are determined by the arrangement of the electrons in the various shells (specified by their quantum number) that surround the nucleus. In a neutral atom, the number of contents as well as platinum group elementsElements with geochemical properties similar to Pt (platinum) including Ru, Rh, Pd, Os, Ir, and sometimes Au. These occur in nature in close association with one another and with Ni and Cu. They are among the least abundant of the Earth’s naturally occurring elements. within the metalElement that readily forms cations and has metallic bonds; sometimes said to be similar to a cation in a cloud of electrons. The metals are one of the three groups of elements as distinguished by their ionization and bonding properties, along with the metalloids and nonmetals. A diagonal line drawn fraction of group IAB meteorites are highly variable on a sub-mm scale. This inhomogeneity requires a low-temperature origin since a high-temperature origin from an igneous melt, followed by such slow cooling rates, would have homogenized the metal. Additional chemical and isotopic constraints lead to the conclusion that the metal was probably formed by a chemical vapor depositionMethod for growing solids in which a gaseous precursor (containing fragments of the desired solid) is decomposed and deposited onto a desired surface. Chemical Vapor Deposition (CVD) is one of the most powerful synthetic methods in material science due to its remarkable flexibility. A variety of surfaces can be coated, process. The graphiteOpaque form of carbon (C) found in some iron and ordinary chondrites and in ureilite meteorites. Each C atom is bonded to three others in a plane composed of fused hexagonal rings, just like those in aromatic hydrocarbons. The two known forms of graphite, α (hexagonal) and β (rhombohedral), have and other silicates were then combined with the metal fraction while in the solid state. In support of a low-temperature history for the graphite–metal inclusions is the presence of various noble gasElement occurring in the right-most column of the periodic table; also called "inert" gases. In these gases, the outer electron shell is completely filled, making them very unreactive. components (Matsuda et al., 2005). Furthermore, the presence of excess 129Xe in the graphite–metal inclusions is consistent with their formation and inclusionFragment of foreign (xeno-) material enclosed within the primary matrix of a rock or meteorite. within the metal host while the nebulaAn immense interstellar, diffuse cloud of gas and dust from which a central star and surrounding planets and planetesimals condense and accrete. The properties of nebulae vary enormously and depend on their composition as well as the environment in which they are situated. Emission nebula are powered by young, massive was still primitive. Green mineralInorganic substance that is (1) naturally occurring (but does not have a biologic or man-made origin) and formed by physical (not biological) forces with a (2) defined chemical composition of limited variation, has a (3) distinctive set of of physical properties including being a solid, and has a (4) homogeneous crystals, either kosmochlor (NaCrSi2O6) or krinovite (NaMg2CrSi3O10), were identified in a graphite nodule by Dr. Laurence Garvie. 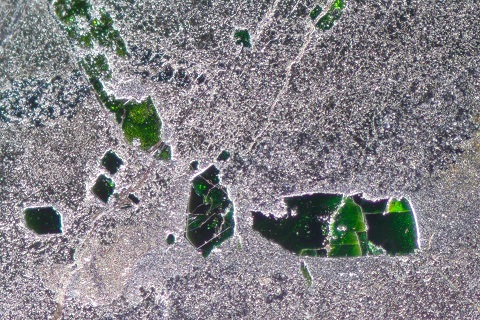 Kosmochlor or krinovite crystals in a Canyon Diablo graphite nodule; FoV 2.5 mm
Photo shown courtesy of Dr. Laurence Garvie, Center for MeteoriteWork in progress. A solid natural object reaching a planet’s surface from interplanetary space. Solid portion of a meteoroid that survives its fall to Earth, or some other body. Meteorites are classified as stony meteorites, iron meteorites, and stony-iron meteorites. These groups are further divided according to their mineralogy and Studies, ASU These graphite nodules survived the incredible 40-megaton blast that occurred around 50,000 years ago in Arizona, destroying 99.999% of the half-million ton mass and creating a spectacular craterBowl-like depression ("crater" means "cup" in Latin) on the surface of a planet, moon, or asteroid. Craters range in size from a few centimeters to over 1,000 km across, and are mostly caused by impact or by volcanic activity, though some are due to cryovolcanism.. Extreme heat and pressure forced metal in the form of kamaciteMore common than taenite, both taenite and kamacite are Ni-Fe alloys found in iron meteorites. Kamacite, α-(Fe,Ni), contains 4-7.5 wt% Ni, and forms large body-centered cubic crystals that appear like broad bands or beam-like structures on the etched surface of a meteorite; its name is derived from the Greek word into the graphite nodules creating ribbons of metal in a jet-black carbonElement commonly found in meteorites, it occurs in several structural forms (polymorphs). All polymorphs are shown to the left with * indicating that it been found in meteorites and impact structures: a. diamond*; b. graphite*; c. lonsdalite*; d. buckminsterfullerene* (C60); e. C540; f. C70; g. amorphous carbon; h. carbon nanotube*. matrixFine grained primary and silicate-rich material in chondrites that surrounds chondrules, refractory inclusions (like CAIs), breccia clasts and other constituents.. The above specimen is a 47.3 g end section. Below is a photo of the impact-melted backside of this specimen. 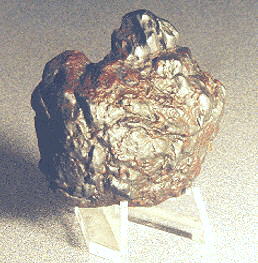