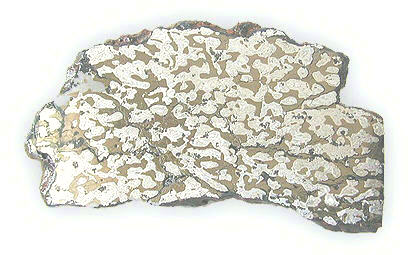 Found 1988
As described by R. Haag (1992), this meteoriteWork in progress. A solid natural object reaching a planet’s surface from interplanetary space. Solid portion of a meteoroid that survives its fall to Earth, or some other body. Meteorites are classified as stony meteorites, iron meteorites, and stony-iron meteorites. These groups are further divided according to their mineralogy and was discovered by a prospector using a metal-detector to search for gold in a mining region of Queensland, Australia. As few as four small, weathered masses of this unusual iron were found scattered over an area of a quarter of a mile; the combined weight of the fragments was 5 kg. Georgetown contains an abundance of sinuous FeS (troiliteBrass colored non-magnetic mineral of iron sulfide, FeS, found in a variety of meteorites.) ribbons throughout the FeNi-metal host, thought to have been trapped during an impact-melt event. Alternative mechanisms for concentrating troilite in FeNi-metal have been suggested, such as by co-crystallization in a S-saturated magmaMolten silicate (rock) beneath the surface of a planetary body or moon. When it reaches the surface, magma is called lava., possibly involving volatile-driven migration of FeNi–FeS blebs into large channels (Kracher, 1985).

Although Georgetown was previously classified as an anomalous member of the IIICD group, it was reclassified into the IAB iron-meteorite complex by J. Wasson and G. Kallemeyn (2002) (see Appendix Part III: Irons for further information on this taxonomic scheme). By utilizing diagrams that compare various compositional elements with AuThe astronomical unit for length is described as the "mean" distance (average of aphelion and perihelion distances) between the Earth and the Sun. Though most references state the value for 1 AU to be approximately 150 million kilometers, the currently accepted precise value for the AU is 149,597,870.66 km. The, it was revealed that Georgetown plots outside of the fields for the main group, the five subgroups, and the five duos. However, on most diagrams, it plots near an extension of the low-Au trend line of the sLM field, but still outside of the sLM trend for all elements studied. Based on this data, Georgetown was classified as an ungrouped solo member of the IAB complex. The name Georgetown (iron) was formally recognized by the NomComm in June of 2008. Further investigation of the IAB complex irons with respect to HSE abundances was conducted by Worsham et al., 2016). Their data confirm the ungrouped classification for Georgetown (see diagram below). 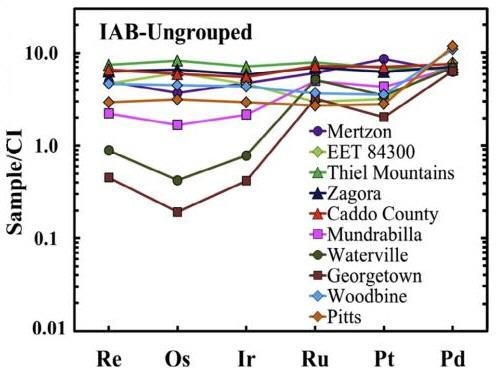 Diagram credit: Worsham et al., GCA, vol. 188, p. 269 (2016)
‘Siderophile elementLiterally, "iron-loving" element that tends to be concentrated in Fe-Ni metal rather than in silicate; these are Fe, Co, Ni, Mo, Re, Au, and PGE. These elements are relatively common in undifferentiated meteorites, and, in differentiated asteroids and planets, are found in the metal-rich cores and, consequently, extremely rare on systematics of IAB complex iron meteorites: New insights into the formation of an enigmatic group’
(https://doi.org/10.1016/j.gca.2016.05.019) The O-isotope data for Georgetown suggest that the precursor material was a metal-rich, FeS-rich, carbonaceous chondriteCarbonaceous chondrites represent the most primitive rock samples of our solar system. This rare (less than 5% of all meteorite falls) class of meteorites are a time capsule from the earliest days in the formation of our solar system. They are divided into the following compositional groups that, other than, perhaps similar to the CR chondriteClass named for the Renazzo meteorite that fell in Italy in 1824, are similar to CMs in that they contain hydrous silicates, traces of water, and magnetite. The main difference is that CRs contain Ni-Fe metal and Fe sulfide that occurs in the black matrix and in the large chondrules parent bodyThe body from which a meteorite or meteoroid was derived prior to its ejection. Some parent bodies were destroyed early in the formation of our Solar System, while others like the asteroid 4-Vesta and Mars are still observable today.. Impact-melting was responsible for the segregation of sulfides from metalElement that readily forms cations and has metallic bonds; sometimes said to be similar to a cation in a cloud of electrons. The metals are one of the three groups of elements as distinguished by their ionization and bonding properties, along with the metalloids and nonmetals. A diagonal line drawn, and the initially high FeS content likely sustained the melting process at lower temperatures (Choi et al., 1994). The photo above shows a 47.2 g etched slice of Georgetown exhibiting abundant troilite.