Feldspars are the most abundant rock-forming silicateThe most abundant group of minerals in Earth's crust, the structure of silicates are dominated by the silica tetrahedron, SiO44-, with metal ions occurring between tetrahedra). The mesodesmic bonds of the silicon tetrahedron allow extensive polymerization and silicates are classified according to the amount of linking that occurs between the minerals in Earth’s crustOutermost layer of a differentiated planet, asteroid or moon, usually consisting of silicate rock and extending no more than 10s of km from the surface. The term is also applied to icy bodies, in which case it is composed of ices, frozen gases, and accumulated meteoritic material. On Earth, the. Feldspars are also common in almost all stony meteorites including lunar and martian meteorites. The two most common types of feldsparAn alumino-silicate mineral containing a solid solution of calcium, sodium and potassium. Over half the Earth’s crust is composed of feldspars and due to their abundance, feldspars are used in the classification of igneous rocks. A more complete explanation can be found on the feldspar group page. are “plagioclaseAlso referred to as the plagioclase feldspar series. Plagioclase is a common rock-forming series of feldspar minerals containing a continuous solid solution of calcium and sodium: (Na1-x,Cax)(Alx+1,Si1-x)Si2O8 where x = 0 to 1. The Ca-rich end-member is called anorthite (pure anorthite has formula: CaAl2Si2O8) and the Na-rich end-member is albite feldspar” that forms as a solid solutionCompositional variation resulting from the substitution of one ion or ionic compound for another ion or ionic compound in an isostructural material. This results in a mineral structure with specific atomic sites occupied by two or more ions or ionic groups in variable proportions. Solid solutions can be complete (with between albite and anorthiteRare compositional variety of plagioclase and the calcium end-member of the plagioclase feldspar mineral series with the formula CaAl2Si2O8. Anorthite is found in mafic igneous rocks such as anorthosite. Anorthite is abundant on the Moon and in lunar meteorites. However, anorthite is very rare on Earth since it weathers rapidly, and “alkali or K-rich feldspar” that forms as a solid solution between albite and orthoclase. K-feldspars commonly exhibit pink to reddish hues, while plagioclase feldspars tend to be white or gray.

Ba-rich feldspar is also considered an alkali feldsparVariety of feldspar containing alkali metals potassium and sodium in a solid solution. A more complete explanation can be found on the feldspar group page that also includes the plagioclase feldspars as part of the feldspar ternary diagram. and forms as the result of a substitutionReplacement of one ion or ionic group for another in the same structural site in a mineral yielding a solid solution. Most substitution in minerals is of cations which are smaller and essentially sit in a lattice of oxygen anions. Anionic substitution does occur in halides. Substitutions are classified based between potassium and barium in the mineralInorganic substance that is (1) naturally occurring (but does not have a biologic or man-made origin) and formed by physical (not biological) forces with a (2) defined chemical composition of limited variation, has a (3) distinctive set of of physical properties including being a solid, and has a (4) homogeneous structure. It does occur in some meteorites. Ba-rich feldspars are subdivided based upon their BaAl2Si2O8 abundance:
– Celsian feldspar has > 90 mol%
– Hyalophane feldspar has < 30 mol%

Feldspar compositions are often expressed in terms of their molecular percentages of anorthite (An), albite (Ab), and orthoclase (Or). The results may be easily plotted on the feldspar ternary diagram (left). Depending on temperature and other environmental factors, alkali (Na – K) feldspars contain < 5 – 10 mol% An, whereas, plagioclase (Ca – Na) feldspars contain < 5 – 10 mol% Or. Intermediate compositions are sometimes given specific names, although this is falling out of common usage. If there is enough K to stabilize an alkali feldspar (Ab-Or solid solution) then the possibility exists to have both an alkali feldspar and a plagioclase feldspar in the same rock as seen in terrestrial felsicOne of the two broad categories of silicate minerals, the other being mafic, based on the magnesium (Mg) and/or iron (Fe) content. Felsic indicates silicate minerals that are not predominantly comprised of Mg and/or Fe. The term is derived from feldspar + ic (having the character or form of). The rocks like granodiorite and graniteAn igneous rock consisting mainly of the minerals quartz and alkali feldspar.. Since the moon is highly depleted in K, but rich in Ca, based on the miscibility gap there is no ability to form an alkali feldspar.

The polymorphs of alkali feldspar are determined based upon order-disorder rather than structural differences. Whether an alkali feldspar within a melt retains its disordered structure or transforms depends largely upon the cooling rate. The K-rich (Or>37) feldspars have three common forms including:
– Sanidine occurs in volcanicIgneous rock that forms from cooling magma on the surface of a planet or asteroid. (extrusiveRefers to igneous rocks erupted on a planetary body's surface.) high-temperature lavas and forms by quenching (rapid cooling).
– Orthoclase occurs in intrusiveRefers to igneous rocks that crystallized underground. plutonicGeology: Igneous intrusive body that forms when magma is injected into host rocks and solidifies. Plutons occur in the crust of asteroids undergoing differentiation or planets. Named after Pluto, the Roman god of the underworld. Plutonic rocks are the rocks found within a pluton. Astronomy: Category of planet including all rocks and forms by moderate cooling.
– Microcline is found in deep-seated plutonic rocks and pegmatites and forms by slow cooling.

The K-poor (Or<10) plagioclase feldspar, albite, also shows disordered and ordered forms depending upon initial temperature and cooling, while the Ca-feldspar, anorthite, is perfectly ordered at room temperature. 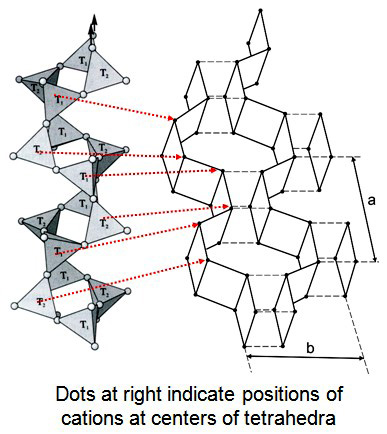 The structure of feldspar can an be considered a “stuffed” version of silica groupMminerals formed exclusively from silica. There are ten known silica polymorphs, two of which are synthetic. Five of the naturall polymorphs are related by reconstructive transformations and can exist metastably: stishovite, coesite, quartz, tridymite, and cristobalite. Conditions to form coesite and stishovite are attained only during meteoroid impacts where there structures, consisting of an infinite network of (SiO4)4- and (AlO4)5- tetrahedra. Alkali metalLarge univalent (1+) metal elements from Group 1 (leftmost column) on the periodic table: lithium (Li), sodium (Na), potassium (K), rubidium (Rb), caesium or cesium (Cs) and francium (Fr). Note that hydrogen is not included within the Alkali Metals. The alkali metals are silvery colored, soft, low density metals, which and earth cations are housed in available voids to maintain charge balance. K+ or Na+ (or rarely Rb+) must fill the voids when a single Al tetrahedron substitutes for a Si tetrahedron; Ca2+ (or rarely Sr2+ or Ba2+) must be added when two Al tetrahedra substitute for Si tetrahedra. Its structure consists of crankshaft-like zigzag paired chains running parallel to the a axis. Each chain is linked to adjacent chains. The cations fit into cavities between crankshafts. The two prominent cleavages observed in feldspar occur along the vertical plane between chains (001) and along the mirror planes between layers (010).