PallasiteOne of two main classes of stony-iron meteorite, the other being mesosiderites. Pallasites are igneous in nature and characterized by crystals of olivine, sometimes peridot (green gem quality clear olivine crystals), embedded in a matrix of Fe-Ni metal. The type specimen, weighing 680 kg, was found in the mountains near, MG (main-group)
low-Δ17O subgroup (see details on the Imilac page) 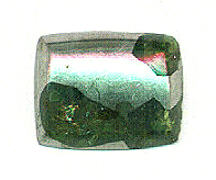 Found 1951
42° 54′ S., 71° 20′ W. A 1,500 kg pallasite meteoriteWork in progress. A solid natural object reaching a planet’s surface from interplanetary space. Solid portion of a meteoroid that survives its fall to Earth, or some other body. Meteorites are classified as stony meteorites, iron meteorites, and stony-iron meteorites. These groups are further divided according to their mineralogy and was found embedded in the ground by Argentine ranchers while excavating for a stock tank. Esquel contains gem quality peridot crystals within the FeNi-metal matrixFine grained primary and silicate-rich material in chondrites that surrounds chondrules, refractory inclusions (like CAIs), breccia clasts and other constituents. and is considered to be one of the most beautiful meteorites known. Formation scenarios and classification schemes for the main-group pallasites can be found on the Imilac page. The specimen of Esquel shown above has been fashioned into a cabochon ready for mounting.