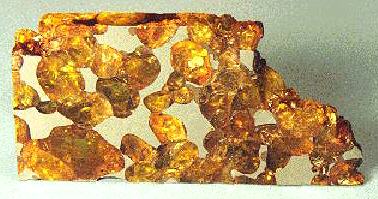 Found December 7, 1961
85° 23.9′ S., 86° 35.4′ W. Geologists from the US Geological Survey found two fragments lying about 200 m apart on the ice at the NE base of Mt. Wrather, in the Thiel Mountains of Antarctica (now a dense collection area abbreviated TIL). This was only the third meteoriteWork in progress. A solid natural object reaching a planet’s surface from interplanetary space. Solid portion of a meteoroid that survives its fall to Earth, or some other body. Meteorites are classified as stony meteorites, iron meteorites, and stony-iron meteorites. These groups are further divided according to their mineralogy and ever found in Antarctica. The larger fragment had a weight of 18 kg and the smaller one 10.6 kg. The fusion crustMelted exterior of a meteorite that forms when it passes through Earth’s atmosphere. Friction with the air will raise a meteorite’s surface temperature upwards of  4800 K (8180 °F) and will melt (ablate) the surface minerals and flow backwards over the surface as shown in the Lafayette meteorite photograph below. had been completely stripped and the surface smoothed and polished due to sandblasting by windblown rock and ice particles. Two smaller pallasites, TIL 07016 (3,490 g) and TIL 08004 (5,008 g), which were found in 2007 and 2008, respectively, are likely paired to the original pallasite.

Thiel Mountains is a typical member of the main-group pallasites. Trace elementSubstance composed of atoms, each of which has the same atomic number (Z) and chemical properties. The chemical properties of an element are determined by the arrangement of the electrons in the various shells (specified by their quantum number) that surround the nucleus. In a neutral atom, the number of and O-isotopic studies suggest that pallasite metalElement that readily forms cations and has metallic bonds; sometimes said to be similar to a cation in a cloud of electrons. The metals are one of the three groups of elements as distinguished by their ionization and bonding properties, along with the metalloids and nonmetals. A diagonal line drawn crystallized from IIIAB liquids during fractional crystallizationA crystallization process in which minerals crystallizing from a magma are isolated from contact with the liquid. It is a key process in the formation of igneous rocks during the process of magmatic differentiation. Also known as crystal fractionation. of the coreIn the context of planetary formation, the core is the central region of a large differentiated asteroid, planet or moon and made up of denser materials than the surrounding mantle and crust. For example, the cores of the Earth, the terrestrial planets and differentiated asteroids are rich in metallic iron-nickel. and mantleMain silicate-rich zone within a planet between the crust and metallic core. The mantle accounts for 82% of Earth's volume and is composed of silicate minerals rich in Mg. The temperature of the mantle can be as high as 3,700 °C. Heat generated in the core causes convection currents in; however, some recent studies rule out this scenario (Yang and Goldstein, 2006). Metallographic cooling rates of pallasites are not what would be expected given an origin at the core–mantle boundary. Instead, based on the size of the island phase in the cloudy zone of the pallasites, the cooling rates are 20× lower than those of IIIAB irons, implying that the irons were actually closer to the surface of the parent bodyThe body from which a meteorite or meteoroid was derived prior to its ejection. Some parent bodies were destroyed early in the formation of our Solar System, while others like the asteroid 4-Vesta and Mars are still observable today. than pallasites. In addition, the Re–Os chronometer suggests that pallasites formed 60 m.y. later than IIIAB irons, raising further doubt about a IIIAB core–mantle origin for main-group pallasites (E. Scott, 2007). Moreover, pallasites have a much younger range of CRE ages than the IIIAB irons (Huber et al., 2011).

The olivineGroup of silicate minerals, (Mg,Fe)2SiO4, with the compositional endpoints of forsterite (Mg2SiO4) and fayalite (Fe2SiO4). Olivine is commonly found in all chondrites within both the matrix and chondrules, achondrites including most primitive achondrites and some evolved achondrites, in pallasites as large yellow-green crystals (brown when terrestrialized), in the silicate portion grains in Thiel Mountains exhibit significant rounding, once considered to be due to thermodynamic processes that minimize the capillary forces along the olivine–metal interface over timescales on the order of 10 to 100 m.y. (Saiki et al., 2003). However, this rounding is now thought to occur primarily from resorption at high temperatures (above ~1250°C) in the presence of silicateThe most abundant group of minerals in Earth's crust, the structure of silicates are dominated by the silica tetrahedron, SiO44-, with metal ions occurring between tetrahedra). The mesodesmic bonds of the silicon tetrahedron allow extensive polymerization and silicates are classified according to the amount of linking that occurs between the melt (Boesenberg et al., 2012). The specimen of Thiel Mountains shown above is a 16.1 g partial slice.