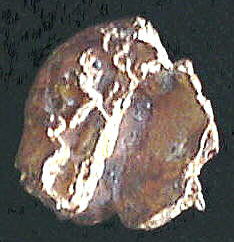 Found 1884
35° 34′ N., 105° 49′ W. Initially, three oriented, regmaglypted masses weighing 67, 52, and 24 kg were found in close proximity by Charles Sponsler on the ranch of Mrs. Roival near Canonçito, New Mexico, five miles south of Glorieta Mountain. Well-preserved black fusion crustMelted exterior of a meteorite that forms when it passes through Earth’s atmosphere. Friction with the air will raise a meteorite’s surface temperature upwards of  4800 K (8180 °F) and will melt (ablate) the surface minerals and flow backwards over the surface as shown in the Lafayette meteorite photograph below. is present, and the lack of secondary fusionProcess in which two lighter atomic nuclei combine to form a heavier atomic nucleus. Very high temperatures are normally required in order for atomic nuclei to collide with sufficient energy to overcome the Coulomb barrier (their mutual electrostatic repulsions). Fusion that occurs under high-temperature conditions is called thermonuclear fusion. Fusion crustOutermost layer of a differentiated planet, asteroid or moon, usually consisting of silicate rock and extending no more than 10s of km from the surface. The term is also applied to icy bodies, in which case it is composed of ices, frozen gases, and accumulated meteoritic material. On Earth, the on some surfaces is indicative of a late atmospheric breakup for the initial mass. Several additional large masses were subsequently recovered, and smaller masses from this shower continue to be found to this day, mostly within a strewnfield measuring 4 × 1 km. Many Glorieta specimens display a unique elongated, cylindrical or prismatic shape, complete with fusion crust and rare olivineGroup of silicate minerals, (Mg,Fe)2SiO4, with the compositional endpoints of forsterite (Mg2SiO4) and fayalite (Fe2SiO4). Olivine is commonly found in all chondrites within both the matrix and chondrules, achondrites including most primitive achondrites and some evolved achondrites, in pallasites as large yellow-green crystals (brown when terrestrialized), in the silicate portion crystals. A medium Thomson (Widmanstätten) structure is produced when etched.

Glorieta Mountain is an anomalous pallasite due to its significantly lower Ge and Ga content than that of main-group pallasites. Its elemental composition suggests that it was derived in large part from the late-stage coreIn the context of planetary formation, the core is the central region of a large differentiated asteroid, planet or moon and made up of denser materials than the surrounding mantle and crust. For example, the cores of the Earth, the terrestrial planets and differentiated asteroids are rich in metallic iron-nickel. metallic melt component of the metal–silicateThe most abundant group of minerals in Earth's crust, the structure of silicates are dominated by the silica tetrahedron, SiO44-, with metal ions occurring between tetrahedra). The mesodesmic bonds of the silicon tetrahedron allow extensive polymerization and silicates are classified according to the amount of linking that occurs between the mixture. Glorieta Mountain has a cosmic-ray exposure ageTime interval that a meteoroid was an independent body in space. In other words, the time between when a meteoroid was broken off its parent body and its arrival on Earth as a meteorite - also known simply as the "exposure age." It can be estimated from the observed effects of 230 (±70) m.y. Curiously, its trace-element values and O- and N-isotopic compositions plot in the range of the IIICD-iron group. While most main-group pallasites contain troiliteBrass colored non-magnetic mineral of iron sulfide, FeS, found in a variety of meteorites. that averages ~2.4 vol%, the abundance of troilite in Glorieta Mountain is much higher, measuring 8 vol%; remarkably, the troilite content of Phillips County is extraordinarily high at >20 vol% (Boesenberg, 2010). Glorieta Mountain is among the pallasites with the lowest cooling rate, at 2.5 (±0.3) K/m.y., while the highest cooling rate of 18 (±9) K/m.y. is found in Finmarken (Yang et al., 2010). These two main-group end members are believed to have cooled at different depths on the same parent bodyThe body from which a meteorite or meteoroid was derived prior to its ejection. Some parent bodies were destroyed early in the formation of our Solar System, while others like the asteroid 4-Vesta and Mars are still observable today.. A 128 g Glorieta fragment was found in a pottery bowl in an Indian ruin located ~50 km from the strewnfield displaying evidence that it might have been used ceremonially. A 40 g fragment, later identified as a Gloritta specimen, was found in a medicine pouch at the Nambe Pueblo in the 1930’s (S. Schoner, pers. comm.). This perfectly preserved fragment was found along with artifacts that were dated to 1250 AD, suggesting that this pallasite may have been a witnessed fallMeteorite seen to fall. Such meteorites are usually collected soon after falling and are not affected by terrestrial weathering (Weathering = 0). Beginning in 2014 (date needs confirmation), the NomComm adopted the use of the terms "probable fall" and "confirmed fall" to provide better insight into the meteorite's history. If from around this time period. The Glorieta Mountain specimen in the photo above is a 5.9 g nugget-like specimen exhibiting a smooth, fusion-crusted side and a rough, fragmented side revealing imbedded clusters of yellow-orange olivine crystals. The photo below shows a beautiful 164 g Glorietta slice with a striking etch pattern.

Photo by Marvin Killgore—Southwest MeteoriteWork in progress. A solid natural object reaching a planet’s surface from interplanetary space. Solid portion of a meteoroid that survives its fall to Earth, or some other body. Meteorites are classified as stony meteorites, iron meteorites, and stony-iron meteorites. These groups are further divided according to their mineralogy and Lab
Courtesy of Michael Masse