AngriteType of evolved achondrite meteorite that represent some of the earliest stages of asteroidal differentiation and magmatism in our solar system. Angrites are named for the Angra dos Reis meteorite, which fell in Rio de Janeiro, Brazil, in early 1869. They are basaltic (mafic) rocks, often containing porous areas, and
Basaltic/Quenched, Picritic 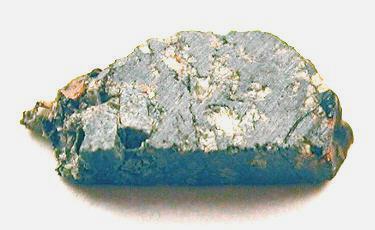 Purchased January 1, 2001
no coordinates recorded A single 30.6 g stone that was found in 2001 in Morocco, possibly in Attamina, was subsequently sold in Erfoud, Morocco to Bruno Fectay and Carine Bidaut. Northwest Africa 1670 was classified at two French institutions, the Université Pierre & Marie Curie (A. Jambon and O. Boudouma) and the Université d’Angers (J-A. Barrat), and has been described as a highly shocked angriteType of evolved achondrite meteorite that represent some of the earliest stages of asteroidal differentiation and magmatism in our solar system. Angrites are named for the Angra dos Reis meteorite, which fell in Rio de Janeiro, Brazil, in early 1869. They are basaltic (mafic) rocks, often containing porous areas, and representative of an impact melt.

As in other angrites, the plagioclase is nearly chemically pure anorthiteRare compositional variety of plagioclase and the calcium end-member of the plagioclase feldspar mineral series with the formula CaAl2Si2O8. Anorthite is found in mafic igneous rocks such as anorthosite. Anorthite is abundant on the Moon and in lunar meteorites. However, anorthite is very rare on Earth since it weathers rapidly (An99–100), but is more Fe-enriched. Lesser amounts of calcic olivine are incorporated as patches within the fassaite. Accessory phases include spinelMg-Al oxide, MgAl2O4, found in CAIs. (both xenocrystic and groundmass types), FeS, kirschsteinite, Ti-magnetite, and Ca-silicophoshate. Ca-carbonate droplets (up to 5 µm) are trapped in pyroxeneA class of silicate (SiO3) minerals that form a solid solution between iron and magnesium and can contain up to 50% calcium. Pyroxenes are important rock forming minerals and critical to understanding igneous processes. For more detailed information, please read the Pyroxene Group article found in the Meteoritics & Classification category.. Alkalies such as Na and K are lacking, possibly as a result of loss during impact events. Trace elementSubstance composed of atoms, each of which has the same atomic number (Z) and chemical properties. The chemical properties of an element are determined by the arrangement of the electrons in the various shells (specified by their quantum number) that surround the nucleus. In a neutral atom, the number of and REEOften abbreviated as “REE”, these 16 elements include (preceded by their atomic numbers): 21 scandium (Sc), 39 Yttrium (Y) and the 14 elements that comprise the lanthanides excluding 61 Promethium, an extremely rare and radioactive element. These elements show closely related geochemical behaviors associated with their filled 4f atomic orbital. data for NWA 1670 are similar to that for the other quenched angrites, and along with the similar mineralogies, indicates a common magmatic origin (Sanborn and Wadhwa, 2010; Mikouchi et al., 2011).

Northwest Africa 1670 is typical in many respects to other angrites, being derived from a primary angritic source melt—the apparent differences among them can be attributed in large part to the accumulation of xenocrystic, highly magnesian olivine and to pyroxene accumulation. The groundmass texture and olivine zoning profiles in NWA 1670 are consistent with that of a more rapidly quenched melt located at very shallow depths. The low Si content and the overabundance of Ca in many mineralInorganic substance that is (1) naturally occurring (but does not have a biologic or man-made origin) and formed by physical (not biological) forces with a (2) defined chemical composition of limited variation, has a (3) distinctive set of of physical properties including being a solid, and has a (4) homogeneous phases of NWA 1670 attests to melting in the presence of carbonateMineral or compound containing carbon and oxygen (i.e. calcium carbonate, CaCO3, calcite). (Jambon et al., 2005). This is a process unique to angrites, which might illustrate one of the earliest stages of Solar SystemDefinable part of the universe that can be open, closed, or isolated. An open system exchanges both matter and energy with its surroundings. A closed system can only exchange energy with its surroundings; it has walls through which heat can pass. An isolated system cannot exchange energy or matter with evolution.

It was proposed by Mikouchi et al (2001) that a rapidly cooling magma (~10–50°C/hour) entrained locally variable amounts of magnesian olivine xenocrysts derived from the mantle into the groundmass melt. Cooling rate data acquired with respect to chemical zoning of olivine xenocrysts gave consistent rates of 7–13°C/hour (Mikouchi et al., 2008). The lower Mn/Cr ratios obtained by Sugiura et al. (2003) are also consistent with rapid cooling within a thin lavaHot molten or semifluid rock derived from a volcano or surface fissure from a differentiated and magmatically active parent body. flow at a depth of ~0.5–2 m. In further contrast to other angrites (with the exception of strongly shocked NWA 7203; Hayashi et al., 2018), NWA 1670 exhibits signs of a severe shock event, as evidenced by mosaicism and undulose extinctionIn astronomy, the dimming of starlight as it passes through the interstellar medium. Dust scatters some of the light, causing the total intensity of the light to diminish. It is important to take this effect into account when measuring the apparent brightness of stars. The dark bands running across portions in olivine xenocrysts, and by the presence of cracks and impact-melt veins. In view of the shock deformation features present in NWA 1670 (and other quenched angrites) olivine xenocrysts, late metamorphism associated with an impact-shock event is considered a possibility (Jambon et al., 2008; Mikouchi et al., 2015, 2017).

In order to better constrain the properties of the differentiated angrite parent body core, van Westrenen et al. (2016) conducted a study modeling siderophile elementLiterally, "iron-loving" element that tends to be concentrated in Fe-Ni metal rather than in silicate; these are Fe, Co, Ni, Mo, Re, Au, and PGE. These elements are relatively common in undifferentiated meteorites, and, in differentiated asteroids and planets, are found in the metal-rich cores and, consequently, extremely rare on depletions along with their metal–silicateThe most abundant group of minerals in Earth's crust, the structure of silicates are dominated by the silica tetrahedron, SiO44-, with metal ions occurring between tetrahedra). The mesodesmic bonds of the silicon tetrahedron allow extensive polymerization and silicates are classified according to the amount of linking that occurs between the partitioningThe tendency of elements to prefer one mineral phase relative to another or to preferentially enter the solid or remain in the liquid during crystallization. behavior for the hypothesized angrite parental melt composition. A CV chondriteChondrites are the most common meteorites accounting for ~84% of falls. Chondrites are comprised mostly of Fe- and Mg-bearing silicate minerals (found in both chondrules and fine grained matrix), reduced Fe/Ni metal (found in various states like large blebs, small grains and/or even chondrule rims), and various refractory inclusions (such mantle composition was used for their calculations, along with a temperature and pressure (0.1 GPa) appropriate for a solidifying melt on a small planetesimal. Their results indicate that the observed siderophile element depletions of angrites are consistent with a core mass fraction of 0.12–0.29 composed of Fe and Ni in a ratio of ~80:20 (with a low S content), and that it was formed under redoxOxidation and reduction together are called redox (reduction and oxidation) and generally characterized by the transfer of electrons between chemical species, like molecules, atoms or ions, where one species undergoes oxidation, a loss of electrons,  while another species undergoes reduction, a gain of electrons. This transfer of electrons between reactants conditions (oxygen fugacityUsed to express the idealized partial pressure of a gas, in this case oxygen, in a nonideal mixture. Oxygen fugacity (ƒO2) is a measure of the partial pressure of gaseous oxygen that is available to react in a particular environment (e.g. protoplanetary disk, Earth's magma, an asteroid's regolith, etc.) and) of ΔIW–1.5 (±0.45).

Multiple episodes of impact, disruption, and dissemination of the crustOutermost layer of a differentiated planet, asteroid or moon, usually consisting of silicate rock and extending no more than 10s of km from the surface. The term is also applied to icy bodies, in which case it is composed of ices, frozen gases, and accumulated meteoritic material. On Earth, the can be inferred by the wide range of CRE ages determined for the angrites—<0.2–56 m.y. for thirteen angrites measured to date, possibly representing as many ejection events (Nakashima et al., 2008; Wieler et al., 2016; Nakashima et al., 2018). This range is consistent with a single large parent body enduring multiple impacts over a very long period of time, which would suggest that the parent object resides in a stable orbitThe elliptical path of one body around another, typically the path of a small body around a much larger body. However, depending on the mass distribution of the objects, they may rotate around an empty spot in space • The Moon orbits around the Earth. • The Earth orbits around (planetary or asteroid beltBelt located between 2.12 and 3.3 AU from the Sun and located between the orbits of Mars and Jupiter containing the vast majority of asteroids. The asteroid belt is also termed the main asteroid belt or main belt to distinguish it from other asteroid populations in the Solar System such) permitting continuous sampling over at least the past 56 m.y. Alternatively, Nakashima et al. (2018) consider it plausible that there is currently at least two angrite (daughter) objects occupying distinct orbits: one representing the fine-grained (quenched) angrites with the shorter CRE age range of <0.2–22 m.y., and another representing the coarse-grained (plutonicGeology: Igneous intrusive body that forms when magma is injected into host rocks and solidifies. Plutons occur in the crust of asteroids undergoing differentiation or planets. Named after Pluto, the Roman god of the underworld. Plutonic rocks are the rocks found within a pluton. Astronomy: Category of planet including all) angrites with the longer CRE age range of 18–56 m.y. (see diagram below).
Cosmic-ray Exposure Ages of Angrites

Diagram credit: Wang et al., 46th LPSC, #2516 (2015)
A limited number of unique angrites are represented in our collections today, and they have been grouped as basaltic/quenched, sub-volcanic/metamorphic, or plutonic/metamorphic, along with a single dunitic sample NWA 8535 (photo courtesy of Habib Naji). Another quenched angrite, NWA 7203 (photo courtesy of Labenne Meteorites), exhibits a striking variolitic texture. Interestingly, small fine-grained basaltBasalt is the most common extrusive igneous rock on the terrestrial planets. For example, more than 90% of all volcanic rock on Earth is basalt. The term basalt is applied to most low viscosity dark silicate lavas, regardless of composition. Basalt is a mafic, extrusive and fine grained igneous rock clasts exhibiting textures and mineralogy generally consistent with a quenched angrite-like impactor are preserved in impact melt glass fragments recovered from the significant impact event that occurred ~5.28 m.y. ago near Bahía Blanca, Argentina (Schultz et al., 2006; Harris and Schultz, 2009, 2017; see photo below). The specimen of NWA 1670 pictured above is a 0.25 g partial slice.