Iron, IVC, ataxiteWork in Progress Relatively rare variety of iron meteorite (designated type D) made almost entirely of taenite, a solid solution of Fe and 27 to 65% Ni. The Greek name means "without structure" and refers to the lack of a visible Widmanstätten pattern (spindles of kamacite are visible only microscopically).
(Iron-ung in MetBull) 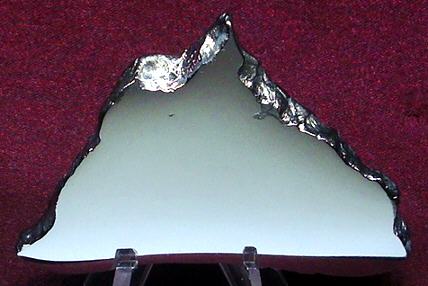 Found 1913
51° 3′ 30′ N., 94° 24′ 0′ E. Many flattened, shrapnel-like iron masses having a combined weight of ~210 kg were found along the Chinge stream bed in Tannu Tuva, which at the time was a small independent country between Mongolia and Siberia. A search for an associated craterBowl-like depression ("crater" means "cup" in Latin) on the surface of a planet, moon, or asteroid. Craters range in size from a few centimeters to over 1,000 km across, and are mostly caused by impact or by volcanic activity, though some are due to cryovolcanism. was conducted in 1963 but none was found as the fallMeteorite seen to fall. Such meteorites are usually collected soon after falling and are not affected by terrestrial weathering (Weathering = 0). Beginning in 2014 (date needs confirmation), the NomComm adopted the use of the terms "probable fall" and "confirmed fall" to provide better insight into the meteorite's history. If is estimated to have occurred 10–20 t.y. ago. Because the meteoriteWork in progress. A solid natural object reaching a planet’s surface from interplanetary space. Solid portion of a meteoroid that survives its fall to Earth, or some other body. Meteorites are classified as stony meteorites, iron meteorites, and stony-iron meteorites. These groups are further divided according to their mineralogy and contains an average of 16.75 wt% nickel, it forms a macroscopically featureless surface structure (micro-plessite). Small inclusions are present, including kamaciteMore common than taenite, both taenite and kamacite are Ni-Fe alloys found in iron meteorites. Kamacite, α-(Fe,Ni), contains 4-7.5 wt% Ni, and forms large body-centered cubic crystals that appear like broad bands or beam-like structures on the etched surface of a meteorite; its name is derived from the Greek word spindles, mm-scale troiliteBrass colored non-magnetic mineral of iron sulfide, FeS, found in a variety of meteorites., daubreelite, and schreibersiteNi-Fe phosphide mineral, (Fe,Ni)3P, yellowish in color and predominantly found in iron and stony-iron meteorites. Schreibersite can also be found in a variety of other meteorites including some acapulcoites, aubrites, enstatite chondrites and achondrites, lunars, ureilites, winonaites and a smattering of other meteorite types like CM, CO and CB. Schreibersite, and schlieren bands occur in the metallic groundmass. Various features of shearing and plastic deformation are related to a violent event in space.

Chinga has been classified by some as an anomalous member of the IVB chemical group (e.g., Buchwald, 1975) based on its low Ge and Ga abundances and ataxite structure. Worsham et al. (2017) and Bermingham et al. (2018) determined that the Mo and Ru isotopic compositions of Chinga overlap with the IVB irons, attesting to the fact that they derive from a common reservoir in a spatial and/or temporal aspect (see top and middle diagrams below). Two distinct reservoirs existed in the early protoplanetary disk—carbonaceous chondriteCarbonaceous chondrites represent the most primitive rock samples of our solar system. This rare (less than 5% of all meteorite falls) class of meteorites are a time capsule from the earliest days in the formation of our solar system. They are divided into the following compositional groups that, other than (CC) and non-carbonaceous (NC). These reservoirs were segregated by the rapid accretionAccumulation of smaller objects into progressively larger bodies in the solar nebula leading to the eventual formation of asteroids, planetesimals and planets. The earliest accretion of the smallest particles was due to Van der Waals and electromagnetic forces. Further accretion continued by relatively low-velocity collisions of smaller bodies in the of proto-Jupiter and reflect differences in the contribution (i.e., susceptibility to thermal processing) of p-, r-, and s-process isotopes inherited as dust ejectaFractured and/or molten rocky debris thrown out of a crater during a meteorite impact event, or, alternatively, material, including ash, lapilli, and bombs, erupted from a volcano. from explosive stellar nucleosynthesis (Poole et al., 2017; Bermingham et al., 2018). However, major compositional differences exist between Chinga and the IVB irons, including the presence in Chinga of Si and P, both of which are depleted in typical IVB members, and a highly siderophile elementLiterally, "iron-loving" element that tends to be concentrated in Fe-Ni metal rather than in silicate; these are Fe, Co, Ni, Mo, Re, Au, and PGE. These elements are relatively common in undifferentiated meteorites, and, in differentiated asteroids and planets, are found in the metal-rich cores and, consequently, extremely rare on (HSE) pattern that is very different from other IVB irons (see bottom diagram below). It is noteworthy that the ungroupedModifying term used to describe meteorites that are mineralogically and/or chemically unique and defy classification into the group or sub-group they most closely resemble. Some examples include Ungrouped Achondrite (achondrite-ung), Ungrouped Chondrite (chondrite-ung), Ungrouped Iron (iron-ung), and Ungrouped Carbonaceous (C-ung). iron Sombrerete also has an overlapping Mo composition. CRE-corrected Mo IsotopeOne of two or more atoms with the same atomic number (Z), but different mass (A). For example, hydrogen has three isotopes: 1H, 2H (deuterium), and 3H (tritium). Different isotopes of a given element have different numbers of neutrons in the nucleus. Compositions of Meteorite Groups
(µ notation denotes deviation from terrestrial standards in parts per million) 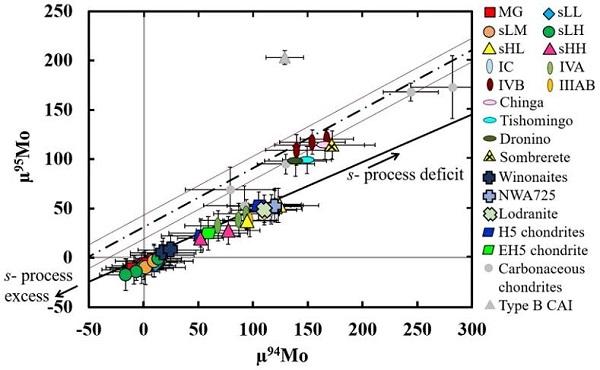 mouseover for alternate view Diagram credit: Worsham et al., EPSL, vol. 467, p. 165 (2017)
‘Characterizing cosmochemical materials with genetic affinities to the Earth: Genetic and chronological diversity within the IAB iron meteoriteMeteorite composed mainly of iron (Fe) and nickel (Ni) in the form of two alloys, kamacite and taenite. Due to their metallic makeup and extraordinary weight, iron meteorites are easily distinguished from ordinary rocks. Also, because they rarely break up in the air and suffer much less from the effects complex’
(https://doi.org/10.1016/j.epsl.2017.02.044) Mo vs. Ru Isotope Compositions of Irons 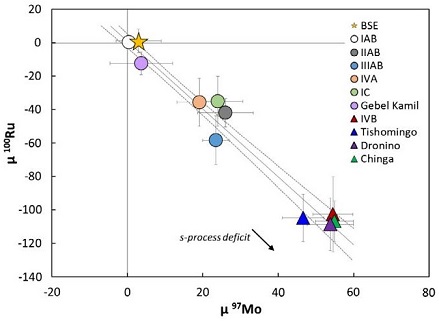 Diagram credit: Bermingham et al., EPSL, vol. 487, p. 226 (2018)
‘New insights into Mo and Ru isotope variation in the nebulaAn immense interstellar, diffuse cloud of gas and dust from which a central star and surrounding planets and planetesimals condense and accrete. The properties of nebulae vary enormously and depend on their composition as well as the environment in which they are situated. Emission nebula are powered by young, massive and terrestrial planetThe term "planet" originally comes from the Greek word for "wanderer" since these objects were seen to move in the sky independently from the background of fixed stars that moved together through the seasons. The IAU last defined the term planet in 2006, however the new definition has remained controversial. accretionary genetics’
(https://doi.org/10.1016/j.epsl.2018.01.017) HSE Abundances of IVB and Ungrouped Irons 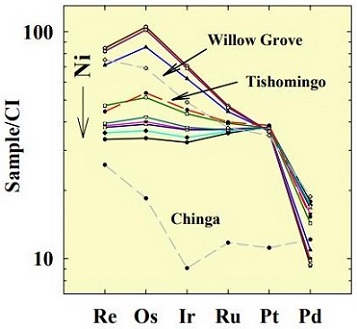 Diagram credit: Honesto et al., 37th LPSC, #1374 (2006) Importantly, Litasov et al. (2018) determined that Chinga shares compositional similarities with six other ungrouped irons: ALH 77255, Alikatnima, Babb’s Mill (Blake’s), Deep Springs, Onello, and Shingle Springs. In addition, they demonstrated that these seven irons plot between the IVA and IVB groups on all elemental diagrams utilized in their study, and therefore they proposed that these irons be combined together into a new transitional subgroup termed IVC. Trace ElementSubstance composed of atoms, each of which has the same atomic number (Z) and chemical properties. The chemical properties of an element are determined by the arrangement of the electrons in the various shells (specified by their quantum number) that surround the nucleus. In a neutral atom, the number of Distribution 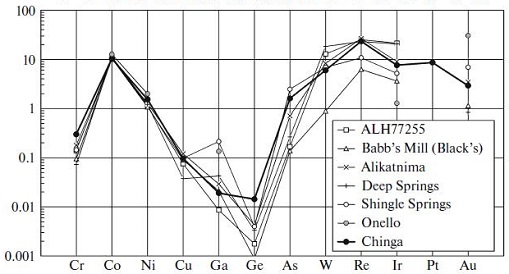 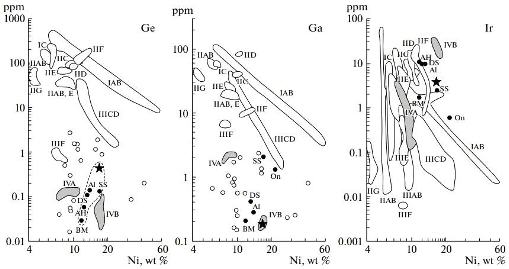 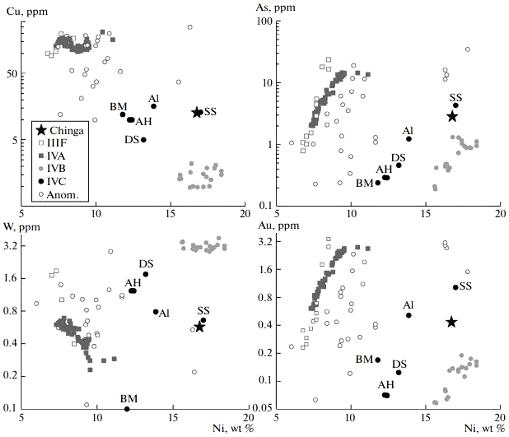