Iron, IVA, octahedriteMost Common type of iron meteorite, composed mainly of taenite and kamacite and named for the octahedral (eight-sided) shape of the kamacite crystals. When sliced, polished and etched with an acid such as nitric acid, they display a characteristic Widmanstätten pattern. Spaces between larger kamacite and taenite plates are often
(silica-bearing) 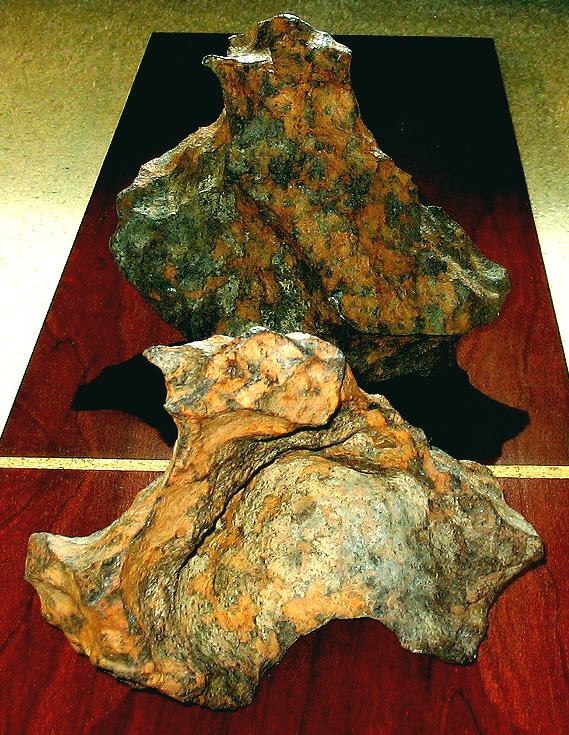 Found 1838; known before
25° 20′ S., 18° E. approx. Although the native Nama people were aware of this iron meteoriteMeteorite composed mainly of iron (Fe) and nickel (Ni) in the form of two alloys, kamacite and taenite. Due to their metallic makeup and extraordinary weight, iron meteorites are easily distinguished from ordinary rocks. Also, because they rarely break up in the air and suffer much less from the effects before 1836, using the metalElement that readily forms cations and has metallic bonds; sometimes said to be similar to a cation in a cloud of electrons. The metals are one of the three groups of elements as distinguished by their ionization and bonding properties, along with the metalloids and nonmetals. A diagonal line drawn for spearheads and other weapons, it was not until this date that it was collected and described. Large masses were recovered in the Namibia Desert, Southwest Africa, in what is the largest strewnfield of any meteoriteWork in progress. A solid natural object reaching a planet’s surface from interplanetary space. Solid portion of a meteoroid that survives its fall to Earth, or some other body. Meteorites are classified as stony meteorites, iron meteorites, and stony-iron meteorites. These groups are further divided according to their mineralogy and, covering an area of ~20,000 km². A total of over 21,400 kg have been recovered, with the largest mass of 650 kg on exhibit in the South African Museum in Cape Town. No impact craterCrater formed by high-speed impact of a meteoroid, asteroid, or comet on a solid surface. Craters are a common feature on most moons (an exception is Io), asteroids, and rocky planets, and range in size from a few cm to over 1,000 km across. There is a general morphological progression is evident, but the severe twisting, over-folding, and cold-worked deformation of the masses attest to a violent atmospheric breakup, while the distinct regmaglypts are consistent with a long, high-velocity flight after breakup.

click on image for a magnified view Diagram credit: Sanborn et al., 49th LPSC, #1780 (2018) The Appendix III contains further details about the petrogenesis of the IVA iron group. The specimen shown above is a 6.7 kg individual (and its mirror image) with natural patina having a shape resembling a catcher’s mitt. The photo below shows one of the most spectacular Gibeon individuals in existence—a 200 kg oriented, thumbprinted mass (photo courtesy of an anonymous collector). 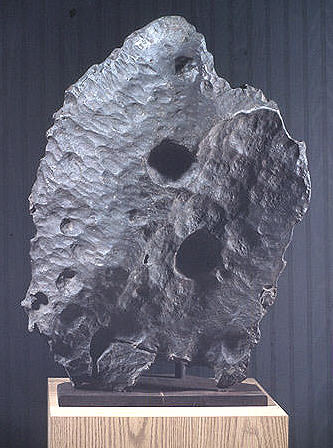