Iron, IVA-an
(silica-rich orthopyroxeniteA rock composed primarily of orthopyroxene. Non-terrestrial orthopyoxenites include diogenites and a single martian meteorite, ALH 84001, that was found in the Allan Hills region of Antarctica in 1984. ALH 84001 is a cumulate rock consisting of 97% coarse-grained, Mg-rich orthopyroxene, with small amounts of plagioclase, chromite, and carbonate. It, possibly LL chondriteOrdinary chondrites ("low Fe" / "low metal") with only 1 to 3% free metal. Their olivine is more Fe-rich than in the other ordinary chondrites (Fa27-32), implying that the LL types must have formed under more oxidizing conditions than their H or L cousins. Orthopyroxene compositions are also Fe-the rich related) 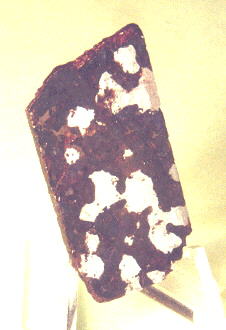 Found 1724
50° 30′ N., 12° 30′ E. approx. A unique meteoriteWork in progress. A solid natural object reaching a planet’s surface from interplanetary space. Solid portion of a meteoroid that survives its fall to Earth, or some other body. Meteorites are classified as stony meteorites, iron meteorites, and stony-iron meteorites. These groups are further divided according to their mineralogy and 40 cm in diameter was found in Karl-Marx-Stadt, Germany, and classified as a IVA-anomalous stony-iron. Steinbach is possibly associated with a fallMeteorite seen to fall. Such meteorites are usually collected soon after falling and are not affected by terrestrial weathering (Weathering = 0). Beginning in 2014 (date needs confirmation), the NomComm adopted the use of the terms "probable fall" and "confirmed fall" to provide better insight into the meteorite's history. If near Grimma, Germany around 1550. Three separate masses were found including a 1.0 kg mass found in Gotha in 1724, an 86.5 kg mass found in Rittersgrün in 1833, and a 10.5 kg mass found in Breitenbach in 1861, for a combined weight of 98 kg.