Iron, IIIF, octahedriteMost Common type of iron meteorite, composed mainly of taenite and kamacite and named for the octahedral (eight-sided) shape of the kamacite crystals. When sliced, polished and etched with an acid such as nitric acid, they display a characteristic Widmanstätten pattern. Spaces between larger kamacite and taenite plates are often

Found during FallMeteorite seen to fall. Such meteorites are usually collected soon after falling and are not affected by terrestrial weathering (Weathering = 0). Beginning in 2014 (date needs confirmation), the NomComm adopted the use of the terms "probable fall" and "confirmed fall" to provide better insight into the meteorite's history. If of 1888
37° 58′ N., 90° 19′ W. A single spheroidal mass of 244 kg was found by Mr. Z. Murphy, a surveyor, ~1 mile west of the hamlet of Punjaub, which is near present-day Lawrenceton, Missouri. The St. Genevieve mass was bought by Ward several years later. Because of the long terrestrial age, several mm has been removed from the surface and terrestrial oxides are evident. 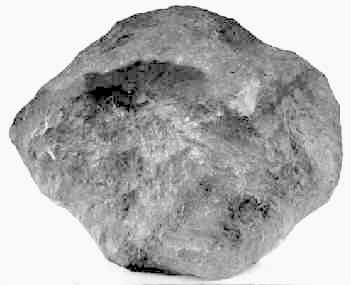