Iron, IC, octahedriteMost Common type of iron meteorite, composed mainly of taenite and kamacite and named for the octahedral (eight-sided) shape of the kamacite crystals. When sliced, polished and etched with an acid such as nitric acid, they display a characteristic Widmanstätten pattern. Spaces between larger kamacite and taenite plates are often 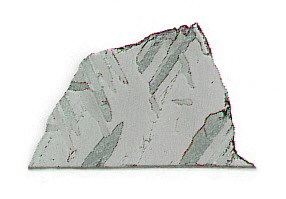 Arispe is a polycrystalline iron meteoriteMeteorite composed mainly of iron (Fe) and nickel (Ni) in the form of two alloys, kamacite and taenite. Due to their metallic makeup and extraordinary weight, iron meteorites are easily distinguished from ordinary rocks. Also, because they rarely break up in the air and suffer much less from the effects with distinctly oriented austenite crystals up to 25 cm in diameter. TroiliteBrass colored non-magnetic mineral of iron sulfide, FeS, found in a variety of meteorites. inclusions occur throughout, enveloped by schreibersiteNi-Fe phosphide mineral, (Fe,Ni)3P, yellowish in color and predominantly found in iron and stony-iron meteorites. Schreibersite can also be found in a variety of other meteorites including some acapulcoites, aubrites, enstatite chondrites and achondrites, lunars, ureilites, winonaites and a smattering of other meteorite types like CM, CO and CB. Schreibersite. The compositional trends are most consistent with formation from a residue of equilibriumTerm used to describe physical or chemical stasis. Physical equilibrium may be divided into two types: static and dynamic. Static equilibrium occurs when the components of forces and torques acting in one direction are balanced by components of forces and torques acting in the opposite direction. A system in static partial meltingAn igneous process whereby rocks melt and the resulting magma is comprised of the remaining partially melted rock (sometimes called restite) and a liquid whose composition differs from the original rock. Partial melting occurs because nearly all rocks are made up of different minerals, each of which has a different melting. While distantly related to group IA irons, its lower Ni content of 6.1%–6.8% led to the establishment of a new group, IC. A unique feature present among group IC members is the occurrence of abundant coheniteFe-Ni-Co carbide, (Fe,Ni,Co)3C, that occurs as an accessory constituent in several iron meteorites, and coarse octahedrites with < 7 wt. % Ni. and other carbonElement commonly found in meteorites, it occurs in several structural forms (polymorphs). All polymorphs are shown to the left with * indicating that it been found in meteorites and impact structures: a. diamond*; b. graphite*; c. lonsdalite*; d. buckminsterfullerene* (C60); e. C540; f. C70; g. amorphous carbon; h. carbon nanotube*. inclusions. Due to a high iridium content, Arispe is considered an anomalous member of the diverse IC group. Radioisotope chronometry indicates an unusually long terrestrial age for the Arispe masses of 240,000 (±50,000) years. The above specimen is an etched 39.6 g partial slice. A photo of the complete 1898 mass weighing 272 pounds is shown below. To learn more about the relationship between this and other iron chemical groups, click here. 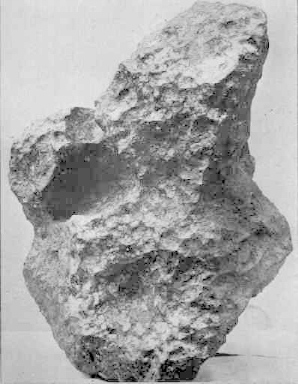