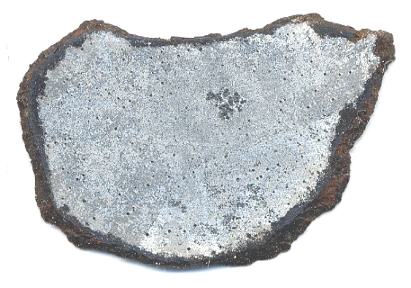 Purchased 2005
no coordinates recorded An unusual looking 726 g iron mass lacking regmaglypts and any remnant fusion crustMelted exterior of a meteorite that forms when it passes through Earth’s atmosphere. Friction with the air will raise a meteorite’s surface temperature upwards of  4800 K (8180 °F) and will melt (ablate) the surface minerals and flow backwards over the surface as shown in the Lafayette meteorite photograph below. was purchased by A. Gren at the Munich MineralInorganic substance that is (1) naturally occurring (but does not have a biologic or man-made origin) and formed by physical (not biological) forces with a (2) defined chemical composition of limited variation, has a (3) distinctive set of of physical properties including being a solid, and has a (4) homogeneous Fair in 2005. A preliminary analysis was conducted at the University of Hamburg, and the finding of zoned nickel provided the first indication that this mass was not a meteorwrong. A sample was sent to Northern Arizona University (T. Bunch and J. Wittke) and an analysis was made utilizing scanning electron microscopy and energy dispersive spectrometry (SEM–EDS).

This iron exhibits an unusual texture, containing light-colored Ni-rich taeniteLess common than kamacite, both taenite and kamacite are Ni-Fe alloys found in iron meteorites. Taenite, γ-(Fe,Ni), has 27-65 wt% Ni, and forms small crystals that appear as highly reflecting thin ribbons on the etched surface of a meteorite; the name derives from the Greek word for "ribbon." grains together with darker kamaciteMore common than taenite, both taenite and kamacite are Ni-Fe alloys found in iron meteorites. Kamacite, α-(Fe,Ni), contains 4-7.5 wt% Ni, and forms large body-centered cubic crystals that appear like broad bands or beam-like structures on the etched surface of a meteorite; its name is derived from the Greek word grains. GraphiteOpaque form of carbon (C) found in some iron and ordinary chondrites and in ureilite meteorites. Each C atom is bonded to three others in a plane composed of fused hexagonal rings, just like those in aromatic hydrocarbons. The two known forms of graphite, α (hexagonal) and β (rhombohedral), have in a wide range of sizes is present throughout. One formation scenario under consideration is that this meteoriteWork in progress. A solid natural object reaching a planet’s surface from interplanetary space. Solid portion of a meteoroid that survives its fall to Earth, or some other body. Meteorites are classified as stony meteorites, iron meteorites, and stony-iron meteorites. These groups are further divided according to their mineralogy and experienced an impact-induced melting event followed by slow cooling. Recrystallization is evident, and this is either the result of a separate heating event or a further consequence of the initial impact event. Shock and terrestrial weathering are minimal. With equipment limitations constraining investigators to bulk Ni content, and with no Thomson (Widmanstätten) structure to measure, it was ascertained that this iron might be a member of the nonmagmatic IAB iron-meteorite complex or could possibly belong to the IIF chemical group. Further petrographic and geochemical analyses were subsequently conducted at the University of Alberta, Canada (C. Herd and J. Duke), utilizing analytical techniques which can better measure the trace levels of Ni, Ir, Ga, and Ge used to distinguish among chemical groups. Although the Ni, Ga and Ge concentrations were found to be similar to the IAB complex, sLM/sLH subgroup (formerly IIICD), the concentration of AuThe astronomical unit for length is described as the "mean" distance (average of aphelion and perihelion distances) between the Earth and the Sun. Though most references state the value for 1 AU to be approximately 150 million kilometers, the currently accepted precise value for the AU is 149,597,870.66 km. The is significantly less than 1.3 µg/g, the minimum abundance required for inclusionFragment of foreign (xeno-) material enclosed within the primary matrix of a rock or meteorite. into the IAB complex. Therefore, NWA 5804 has been classified as a IAB-complex ungroupedModifying term used to describe meteorites that are mineralogically and/or chemically unique and defy classification into the group or sub-group they most closely resemble. Some examples include Ungrouped Achondrite (achondrite-ung), Ungrouped Chondrite (chondrite-ung), Ungrouped Iron (iron-ung), and Ungrouped Carbonaceous (C-ung). iron. The photo of the Gren iron meteoriteMeteorite composed mainly of iron (Fe) and nickel (Ni) in the form of two alloys, kamacite and taenite. Due to their metallic makeup and extraordinary weight, iron meteorites are easily distinguished from ordinary rocks. Also, because they rarely break up in the air and suffer much less from the effects shown above is a 4.569 g slice exhibiting a recrystallized texture with abundant graphite grains and aggregates. The photos displayed below are the main massLargest fragment of a meteorite, typically at the time of recovery. Meteorites are commonly cut, sliced or sometimes broken thus reducing the size of the main mass and the resulting largest specimen is called the "largest known mass". as found, a full cut face, and a close-up of the unusual texture of this meteorite. 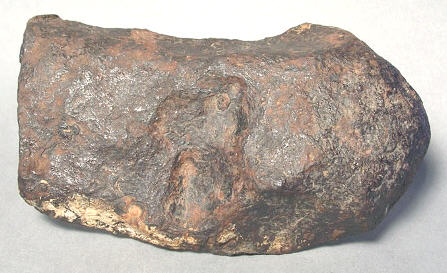 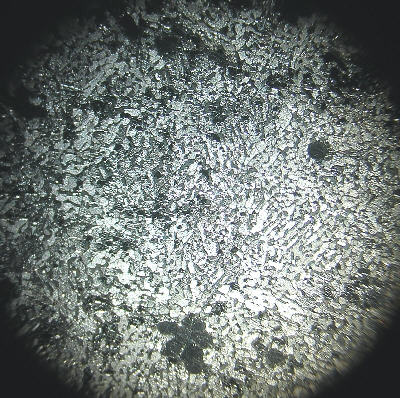