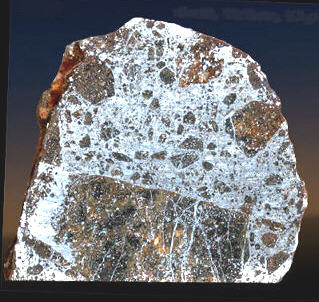 Found October 1999
27° 11.88′ N., 16° 24.51′ E. While hunting in a well-searched area of the southeastern Dar al Gani plateau, Libya, the Pelisson’s of Sahara MeteoriteWork in progress. A solid natural object reaching a planet’s surface from interplanetary space. Solid portion of a meteoroid that survives its fall to Earth, or some other body. Meteorites are classified as stony meteorites, iron meteorites, and stony-iron meteorites. These groups are further divided according to their mineralogy and Prospecting found a 130 g stony-iron meteoriteMeteorite composed of roughly equal amounts by weight of silicate minerals and Ni-Fe metal. The stony-irons consist of two groups: mesosiderites and pallasites. However, there is gradual shading into metal-rich stony meteorites such as the lodranites (once considered stony-irons) and silicate-rich iron meteorites. Stony-iron meteorites are less abundant than their. Although they returned to the area, they failed to findMeteorite not seen to fall, but recovered at some later date. For example, many finds from Antarctica fell 10,000 to 700,000 years ago. any other pieces of this unique meteorite (R. Pelisson, pers. comm.). It is their opinion that the high densityMass of an object divided by its volume. Density is a characteristic property of a substance (rock vs. ice, e.g.). Some substances (like gases) are easily compressible and have different densities depending on how much pressure is exerted upon them. The Sun is composed of compressible gases and is much of this meteorite might be responsible for a deeper penetration into the soil; luckily, this single individual was only half buried. Another factor that could frustrate attempts to locate more fragments of this meteorite is its proximity to a basaltic massif, which consists completely of black rocks, likely rendering any future searches futile.

In a collaboration among research groups (Cole and Sipiera of the Schmitt Meteorite Research Group; Jerman and Hoover of the NASA Marshall Space Flight Center; Dod of the Mercer University Department of Physics; the Pelisson’s of SaharaMet), an analysis of DaG 962 published in an abstract at the 65th MetSoc (2002) resulted in a classification of anomalous mesosideriteOne of two main types of stony-iron meteorite, the other being pallasites. Mesosiderites are a mixture of approximately 50% basaltic, gabbroic and orthopyroxenitic silicates and 50% Ni-Fe metal and sulfides. The name derives from the Greek "mesos" meaning "middle" or "half" and "sideros" for "iron;" hence "half-iron". The silicates are. This meteorite is composed of 55 vol% metallic matrixFine grained primary and silicate-rich material in chondrites that surrounds chondrules, refractory inclusions (like CAIs), breccia clasts and other constituents. and 45 vol% angular silicateThe most abundant group of minerals in Earth's crust, the structure of silicates are dominated by the silica tetrahedron, SiO44-, with metal ions occurring between tetrahedra). The mesodesmic bonds of the silicon tetrahedron allow extensive polymerization and silicates are classified according to the amount of linking that occurs between the clasts (MetBull 86). The silicates are primarily magnesian olivineGroup of silicate minerals, (Mg,Fe)2SiO4, with the compositional endpoints of forsterite (Mg2SiO4) and fayalite (Fe2SiO4). Olivine is commonly found in all chondrites within both the matrix and chondrules, achondrites including most primitive achondrites and some evolved achondrites, in pallasites as large yellow-green crystals (brown when terrestrialized), in the silicate portion (Fa1.0) and enstatiteA mineral that is composed of Mg-rich pyroxene, MgSiO3. It is the magnesium endmember of the pyroxene silicate mineral series - enstatite (MgSiO3) to ferrosilite (FeSiO3). (Fs0.84), which are often intruded by veinlets of FeNi-metal (kamaciteMore common than taenite, both taenite and kamacite are Ni-Fe alloys found in iron meteorites. Kamacite, α-(Fe,Ni), contains 4-7.5 wt% Ni, and forms large body-centered cubic crystals that appear like broad bands or beam-like structures on the etched surface of a meteorite; its name is derived from the Greek word and taeniteLess common than kamacite, both taenite and kamacite are Ni-Fe alloys found in iron meteorites. Taenite, γ-(Fe,Ni), has 27-65 wt% Ni, and forms small crystals that appear as highly reflecting thin ribbons on the etched surface of a meteorite; the name derives from the Greek word for "ribbon."). Minor clinopyroxene and plagioclaseAlso referred to as the plagioclase feldspar series. Plagioclase is a common rock-forming series of feldspar minerals containing a continuous solid solution of calcium and sodium: (Na1-x,Cax)(Alx+1,Si1-x)Si2O8 where x = 0 to 1. The Ca-rich end-member is called anorthite (pure anorthite has formula: CaAl2Si2O8) and the Na-rich end-member is albite are present, as well as troiliteBrass colored non-magnetic mineral of iron sulfide, FeS, found in a variety of meteorites.. Newly conducted electron microprobeInstrument that analyzes the chemistry of very small spots by bombarding the sample with a focused electron beam and measuring the X-rays produced. The amount and energy of the x-rays indicate the chemical composition of the sample. The electron microprobe is an important tool used in determining the composition of studies conducted by Kuehner et al. (2011) identified accessory phases of daubreelite, schreibersiteNi-Fe phosphide mineral, (Fe,Ni)3P, yellowish in color and predominantly found in iron and stony-iron meteorites. Schreibersite can also be found in a variety of other meteorites including some acapulcoites, aubrites, enstatite chondrites and achondrites, lunars, ureilites, winonaites and a smattering of other meteorite types like CM, CO and CB. Schreibersite, and magnesiochromite. The internal structure is more similar to the pallasites than the mesosiderites in having a continuous network of FeNi-metal enclosing silicates, consistent with an igneous origin in a core–mantleMain silicate-rich zone within a planet between the crust and metallic core. The mantle accounts for 82% of Earth's volume and is composed of silicate minerals rich in Mg. The temperature of the mantle can be as high as 3,700 °C. Heat generated in the core causes convection currents in boundary. However, the silicates are more Mg-rich than those in main-group pallasites or any other pallasites; they are more similar to irons of group IAB. O-isotope data collected by D. Rumble III (Carnegie Institution, Washington DC) also plot near the IAB iron complex and winonaites. Dar al Gani 962 may be comparable to the Landes IAB silicated iron, and shows some similarity to Woodbine. The photo above shows a 1.3 g partial slice of DaG 962, the mirror slice of the portion used for the thin sectionThin slice or rock, usually 30 µm thick. Thin sections are used to study rocks with a petrographic microscope. that was utilized for the analysis. The top photo below shows the meteorite in situ, while the bottom photo shows the main massLargest fragment of a meteorite, typically at the time of recovery. Meteorites are commonly cut, sliced or sometimes broken thus reducing the size of the main mass and the resulting largest specimen is called the "largest known mass"., illustrating the staining on the portion previously embedded below soil level. 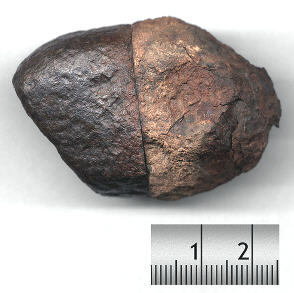