Found 1875
26° 19′ S., 48° 39′ W. Many large masses of this ungroupedModifying term used to describe meteorites that are mineralogically and/or chemically unique and defy classification into the group or sub-group they most closely resemble. Some examples include Ungrouped Achondrite (achondrite-ung), Ungrouped Chondrite (chondrite-ung), Ungrouped Iron (iron-ung), and Ungrouped Carbonaceous (C-ung)., Ni-rich (35.3%), troilite-rich, ataxiteWork in Progress Relatively rare variety of iron meteorite (designated type D) made almost entirely of taenite, a solid solution of Fe and 27 to 65% Ni. The Greek name means "without structure" and refers to the lack of a visible Widmanstätten pattern (spindles of kamacite are visible only microscopically). were found on and within a small hill by Gonclaves da Rosa on the island of São Francisco, Santa Catarina, Brazil. The combined weight of the recovered masses was estimated to be at least 7,000 kg, but was probably much higher since a large portion was smelted to extract its unusually high content of nickel (some portions up to 50%). Although the IAB-complex irons are the products of impact-related melting, the anomalously high Ni content in Santa Catharina is more consistent with fractional crystallizationA crystallization process in which minerals crystallizing from a magma are isolated from contact with the liquid. It is a key process in the formation of igneous rocks during the process of magmatic differentiation. Also known as crystal fractionation. within a deep melt pool.

Although much of this iron has been significantly oxidizedOxidation and reduction together are called redox (reduction and oxidation) and generally characterized by the transfer of electrons between chemical species, like molecules, atoms or ions, where one species undergoes oxidation, a loss of electrons,  while another species undergoes reduction, a gain of electrons. This transfer of electrons between reactants by terrestrial weathering, some metallic portions are preserved. The presence in Santa Catharina of the phosphide barringeriteNickel-iron phosphide, (Fe,Ni)2P, found in iron meteorites., a mineralInorganic substance that is (1) naturally occurring (but does not have a biologic or man-made origin) and formed by physical (not biological) forces with a (2) defined chemical composition of limited variation, has a (3) distinctive set of of physical properties including being a solid, and has a (4) homogeneous usually unstable in association with metalElement that readily forms cations and has metallic bonds; sometimes said to be similar to a cation in a cloud of electrons. The metals are one of the three groups of elements as distinguished by their ionization and bonding properties, along with the metalloids and nonmetals. A diagonal line drawn, attests to a high cooling rate; however, a low cooling rate is considered necessary for the formation of some unique FeNi-metal phases. Those FeNi-metal mineral phases present in Santa Catharina include an ordered Fe-deficient tetrataenite (44.6 wt%) associated with a disordered paramagnetic, Fe-rich antitaenite (48.9 wt%), and a disordered Fe-deficient, face-centered cubicA crystal structure that has one atom at each corner of the unit cell and one atom in the center of each face. See the definition for Crystal System for more details. phase (6.5 wt%); these phases were identified by synchrotron X-ray diffractionAnalytical technique used to determine the structures of crystalline solids. A monochromatic beam of X-rays (usually Cu-Kα) is diffracted off repeating planes of atoms in crystalline samples to produce a diffraction pattern. Through analysis of the diffraction pattern, atomic structures can often be determined. techniques (Scorzelli et al., 2007). Based on noble gasElement occurring in the right-most column of the periodic table; also called "inert" gases. In these gases, the outer electron shell is completely filled, making them very unreactive. data, Santa Catharina has a CRE-age of 140 m.y. Santa Catharina shares many taxonomic characteristics with Twin City, which prompted Wasson and Kallemeyn (2002) to classify them as a unique duo within the IAB iron complex. Twin City contains slightly less Ni (30%) and troiliteBrass colored non-magnetic mineral of iron sulfide, FeS, found in a variety of meteorites. than Santa Catharina, and instead of an ataxitic structure, it exhibits a rudimentary orientation of kamaciteMore common than taenite, both taenite and kamacite are Ni-Fe alloys found in iron meteorites. Kamacite, α-(Fe,Ni), contains 4-7.5 wt% Ni, and forms large body-centered cubic crystals that appear like broad bands or beam-like structures on the etched surface of a meteorite; its name is derived from the Greek word spindles into a Thomson (Widmanstätten) structure. Although to a much lower degree than Santa Catharina, Twin City has suffered significant deterioration from thousands of years of terrestrial weathering. The specimens of Santa Catharina pictured above are a 0.3 g unoxidized thin partial slice (left) and a 6.84 g oxidized fragment (right; specimens not shown to the same scale). The top photo below is a grouping of rare unoxidized fragments shown courtesy of Dr. Jay Piatek, and below that is a YouTube video from Sergey Vasiliev showing a 13 kg metallic mass (21 × 14 × 14 cm). A close-up view of a large unoxidized specimen exhibited at the Muséum National d’Histoire de Paris can be seen at their website. 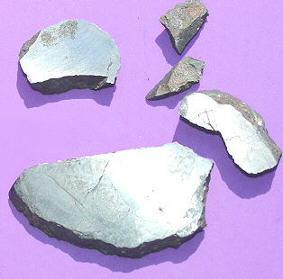