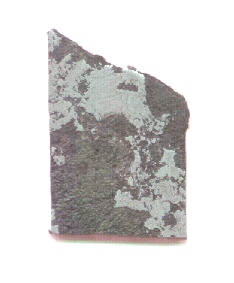 Found Spring 1953
42° 20′ 48′ N., 90° 10′ 6′ W. A mass of 48.2 kg was plowed up on Henry Albrecht’s farm ~2 km west of Woodbine, Illinois. The weathered angular mass measuring 30 × 27 × 17 cm was without its fusion crustMelted exterior of a meteorite that forms when it passes through Earth’s atmosphere. Friction with the air will raise a meteorite’s surface temperature upwards of  4800 K (8180 °F) and will melt (ablate) the surface minerals and flow backwards over the surface as shown in the Lafayette meteorite photograph below. and heat-affected zone, indicating a very long terrestrial residence.

click on photo for a magnified view Diagrams credit: Dey et al., 50th LPSC, #2977 (2019)
The composition of Woodbine is consistent with mixing, compression, and annealing of incompletely segregated metal and silicate on a small chondritic asteroid which never experienced temperatures high enough for complete melting to occur. Upon cooling, the graphite and schreibersite precipitated on the silicate grains, followed by kamacite nucleation, which gradually developed into a Thomson (Widmanstätten) structure. Neumann bands were formed by the impact shock that dislodged the mass from the asteroid. The absolute I–Xe retention age for Woodbine, relative to the Shallowater standard, was calculated to be 4.5659 (±0.0003) b.y (Niemeyer, 1979). In a study of iron meteoriteMeteorite composed mainly of iron (Fe) and nickel (Ni) in the form of two alloys, kamacite and taenite. Due to their metallic makeup and extraordinary weight, iron meteorites are easily distinguished from ordinary rocks. Also, because they rarely break up in the air and suffer much less from the effects exposure histories, Welten et al. (2008) found that Pitts exhibits a complex exposure history comprising two stages. During the first stage of irradiation, which involved high shielding at a depth of 63–77 cm within an object >2 m in diameter, cosmogenic noble gasElement occurring in the right-most column of the periodic table; also called "inert" gases. In these gases, the outer electron shell is completely filled, making them very unreactive. data indicate a CRE age of 600 (+190/–150) m.y. A second stage irradiation lasting only ~0.7 (±0.2) m.y. occurred on a <40 cm diameter body. The investigators argue that the cosmogenic radionuclideRadioactive isotope - Atomic nuclide that decays radioactively . and noble gas data for Pitts are consistent with a scenario in which a fragment was ejected during a minor impact on a km-sized near-Earth object (NEO), followed by its rapid delivery to Earth. A possible source object for the Pitts meteorite is the Earth-crossing M-type asteroid 1986 DA, itself possibly derived from a larger main beltBelt located between 2.12 and 3.3 AU from the Sun and located between the orbits of Mars and Jupiter containing the vast majority of asteroids. The asteroid belt is also termed the main asteroid belt or main belt to distinguish it from other asteroid populations in the Solar System such object. Since 1986 DA has a semi-major axis that is close to the 5:2 mean motion resonance with Jupiter, one of the M-type asteroids similarly located such as 16 Psyche and 216 Kleopatra might be the source parent body of the Pitts iron, and by association, the Woodbine and Colfax irons. Woodbine is a fine octahedriteMost Common type of iron meteorite, composed mainly of taenite and kamacite and named for the octahedral (eight-sided) shape of the kamacite crystals. When sliced, polished and etched with an acid such as nitric acid, they display a characteristic Widmanstätten pattern. Spaces between larger kamacite and taenite plates are often of the IAB iron-meteorite complex. To learn more about the relationship within the IAB complex and among other iron chemical groups, see the Appendix Part III. The specimen of Woodbine pictured above is a 9.7 g partial slice containing coarse silcate inclusions.