Martian ShergottiteIgneous stony meteorite with a Martian origin consisting mainly of plagioclase (or a shocked glass of plagioclase composition) and pyroxene. They are the most abundant type of SNC meteorites and the type member is the Shergotty meteorite, which fell in India in 1865. Shergottites are igneous rocks of volcanic or Click on Term to Read More
low-Al basaltBasalt is the most common extrusive igneous rock on the terrestrial planets. For example, more than 90% of all volcanic rock on Earth is basalt. The term basalt is applied to most low viscosity dark silicate lavas, regardless of composition. Basalt is a mafic, extrusive and fine grained igneous rock Click on Term to Read More ∗
(enriched, maficOne of the two broad categories of silicate minerals, the other being felsic, based on its magnesium (Mg) and/or iron (Fe) content. Mafic indicates silicate minerals that are predominantly comprised of Mg and/or Fe.The term is derived from those major constituents: Magnesium + Ferrum (Latin for iron) + ic (having Click on Term to Read More) 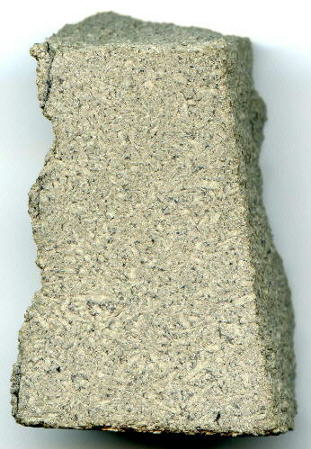 click on photo for a magnified view Fell October 3, 1962
11° 44′ N., 7° 5′ E. An eyewitness account of this meteoriteWork in progress. A solid natural object reaching a planet’s surface from interplanetary space. Solid portion of a meteoroid that survives its fall to Earth, or some other body. Meteorites are classified as stony meteorites, iron meteorites, and stony-iron meteorites. These groups are further divided according to their mineralogy and Click on Term to Read More fallMeteorite seen to fall. Such meteorites are usually collected soon after falling and are not affected by terrestrial weathering (Weathering = 0). Beginning in 2014 (date needs confirmation), the NomComm adopted the use of the terms "probable fall" and "confirmed fall" to provide better insight into the meteorite's history. If Click on Term to Read More was provided to Robert ‘Meteoriteman’ Haag at the actual site. Haag related in his Meteorite Field Guide (1991) that a man who was chasing cows out of his cornfield near the village of Zagami Rock, Nigeria, suddenly heard a loud explosion and was buffetted by a pressure wavePropagating disturbance which transmits energy from one point to another without physically transporting the oscillating quantity. A wave is characterized by wavelength and frequency.. Seconds later there was a puff of smoke and a thud about ten feet away. Fearing that an artillery shell had landed, the man waited for a few minutes before approaching the two-foot hole. The black rock was recovered and placed in a museum in Kaduna.

A calcium-rich, basaltic rock, having a pre-atmospheric size of ≤0.5 m and a weight of at least 150 kg (Eugster et al., 2002), had just completed a 3-million-year journey from Mars. Following an atmospheric ablationGradual removal of the successive surface layers of a material through various processes. • The gradual removal and loss of meteoritic material by heating and vaporization as the meteoroid experiences frictional melting during its passage through the atmosphere. The resulting plasma ablates the meteor and, in cases where a meteor Click on Term to Read More of more than 90%, this rare martian rock was reducedOxidation and reduction together are called redox (reduction and oxidation) and generally characterized by the transfer of electrons between chemical species, like molecules, atoms or ions, where one species undergoes oxidation, a loss of electrons,  while another species undergoes reduction, a gain of electrons. This transfer of electrons between reactants Click on Term to Read More to a single 18 kg mass. Evidence supporting a martian origin includes the following:

The martian shergottite group was previously divided into two distinct subgroups, the basaltic and ‘lherzolitic’ subgroups. In actuality, the ‘lherzolitic’ shergottites do not contain the minimum abundances of olivineGroup of silicate minerals, (Mg,Fe)2SiO4, with the compositional endpoints of forsterite (Mg2SiO4) and fayalite (Fe2SiO4). Olivine is commonly found in all chondrites within both the matrix and chondrules, achondrites including most primitive achondrites and some evolved achondrites, in pallasites as large yellow-green crystals (brown when terrestrialized), in the silicate portion Click on Term to Read More or orthopyroxeneOrthorhombic, low-Ca pyroxene common in chondrites. Its compositional range runs from all Mg-rich enstatite, MgSiO3 to Fe-rich ferrosilite, FeSiO3. These end-members form an almost complete solid solution where Mg2+ substitutes for Fe2+ up to about 90 mol. % and Ca substitutes no more than ~5 mol. % (higher Ca2+ contents occur Click on Term to Read More as those established for terrestrial lherzolites. Since there was no known petrologic relationship existing between the basaltic and ‘lherzolitic’ shergottite subgroups, and these groups are resolved from each other on an O-isotope plot, the use of the term lherzolites was proposed by Eugster and Polnau (1997) to represent this unique group of martian meteorites. Thereafter, in an effort to resolve the discrepencies that exist between the official IUGS definition of lherzolites and the application of that term to the varied group of ‘lherzolitic’ shergottites, Mikouchi (2009) addressed the need for changing the name of the ‘lherzolitic’ shergottites to one that is more consistent and more broadly applicable. Since a texturally-based nomenclature is already employed for some shergottite subgroups, e.g., olivine-phyric, it was suggested that the term ‘pyroxene-oikocrystic’ shergottites would be an appropriate name with which to encompass all of the various martian ‘lherzolitic’ shergottites that exist in the worldwide collections. This would include intermediate, enriched, and postulated depleted ‘lherzolitic’ shergottites, as reflected by a geochemical classification scheme. More recently, in an effort to rectify the discrepencies that exist in martian meteoriteOver 30 of the meteorites found on Earth almost certainly came from Mars (see http://www.imca.cc/mars/martian-meteorites.htm and http://www2.jpl.nasa.gov/snc/). All but one belongs to the group known as SNC meteorites, which includes the shergottites, nakhlites, and chassignites. SNC meteorites contain minerals that crystallized within the past 1.35 to 0.15 Ga, making them Click on Term to Read More nomenclature, the textural term ‘poikilitic’ was proposed by Walton et al. (2012) to apply to those meteorites previously referred to as ‘lherzolitic’ shergottites, which is to be used along with additional descriptive terms for the bulk major elementSubstance composed of atoms, each of which has the same atomic number (Z) and chemical properties. The chemical properties of an element are determined by the arrangement of the electrons in the various shells (specified by their quantum number) that surround the nucleus. In a neutral atom, the number of Click on Term to Read More composition (based on Mg/(Mg + Fe); mafic, permafic, or ultramaficTerm used for silicate minerals with cations predominantly Mg and/or Fe. Mafic minerals are dominated by plagioclase and pyroxene, and also contain smaller amounts of olivine. Click on Term to Read More) and the trace element content (depleted, intermediate, or enriched) of a meteorite.

The Mars ejection age for Zagami pyroxene based on 37Ar is 2.2–3.0 m.y., determined by adding together the cosmic ray exposure (CRE) age and the terrestrial age (Eugster et al., 2002). The ejection ages of several other basaltic shergottites, including Shergotty (3.0 ±0.3 m.y.), Los Angeles (3.0 ±0.3 m.y.), and QUE 94201 (2.8 ±0.3 m.y.), suggest that they all may have experienced a simultaneous ejection event on Mars. Other olivine-bearing shergottites, including Dar al Gani 476 (and pairings) and Sayh al Uhaymir 005 (and pairings), have very similar ejection ages of 1.24 (±0.12) m.y. and 1.0–1.4 m.y., respectively. Their similar CRE ages, bulk chemical compositions, 26Al concentrations, and textures, may represent a common magma source and ejection event from Mars. The shergottite EETA79001 has an ejection age of 0.73 (±0.15) m.y. and may be associated with the DaG 476 ejection event, or alternatively, it may represent a late breakup in space of the lherzolitic shergottite meteoroidSmall rocky or metallic object in orbit around the Sun (or another star). consistent with its content of lherzolitic-type xenocrysts. All of the lherzolitic meteorites found so far have ejection ages that closely coincide (3.8 ±0.7 to 4.7 ±0.5 m.y.), indicating a likely ejection from Mars ~1 m.y. before most of the basaltic shergottites, or possibly that they crystallized later at depth. Cosmic ray exposure ages have now been determined for many more martian meteorites and Mahajan (2015) compiled a chart based on the reported CRE ages for 53 of them (out of a total of ~80 known at that time). He concluded that together these 53 meteorites represent 10 distinct impact events which occurred 0.92 m.y., 2.12 m.y., 2.77 m.y., 4.05 m.y., 7.3 m.y., 9.6 m.y., 11.07 m.y., 12.27 m.y., 15 m.y., and 16.73 m.y.—see his chart here. In a subsequent review based on multiple criteria, Irving et al. (2017 [#2068]) made a new determination of the number of separate launch events associated with the known (101 at the time of their study) martian meteorites. They speculate that the number could be as few as twenty, and suggest that Zagami and at least 26 other enriched olivine-free mafic shergottites were probably ejected in a few separate impact events ~2–5 m.y. ago. A study was made on Zagami in which calculations were made of shock veins in order to determine the duration of the shock wave at impact (~10 ms), and with that, the commensurate size of the impact craterCrater formed by high-speed impact of a meteoroid, asteroid, or comet on a solid surface. Craters are a common feature on most moons (an exception is Io), asteroids, and rocky planets, and range in size from a few cm to over 1,000 km across. There is a general morphological progression Click on Term to Read More that was formed. The results indicate a craterBowl-like depression ("crater" means "cup" in Latin) on the surface of a planet, moon, or asteroid. Craters range in size from a few centimeters to over 1,000 km across, and are mostly caused by impact or by volcanic activity, though some are due to cryovolcanism. Click on Term to Read More size of 1.5–5.0 km (Walton et al., 2008). Additionally, an excellent candidate for one of the source craters that led to the spallationThe formation of new nuclides by interactions of high-energy cosmic ray protons with target nuclei that commonly produce several smaller product nuclides. of the late-forming shergottites is the 10.1-km-diameter rayed crater Zunil, which is the most conspicuous crater located in the young, Amazonian-aged (1.8 billion years ago to the present day), lava-covered Cerberus Planum within Elysium Planitia. Other shergottites may have been ejected from the young terrain at the base of the Ceraunius Tholus volcano in the Tharsis province, or from similar young craters reflecting ejection events consistent with CRE ages of <18 m.y. Based on data from the Infrared Mineralogical Mapping Spectrometer aboard the Mars Express orbiter, the best fits mineralogically are in the older volcanic terrains of the southern highlands including Syrtis Major, Thaumasia Planum, and Herperia Planum (Ody et al., 2013). The specimen shown above is a 21.0 g cut fragment of the coarse-grained component from the NZ (normal Zagami) lithology containing oriented pigeonite crystals and a segment of a black glassy shock-melt vein at the top edge. 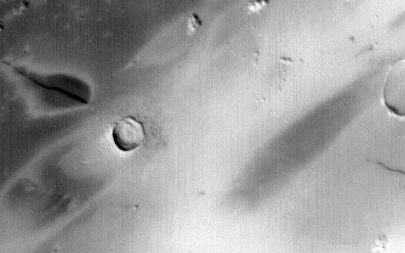 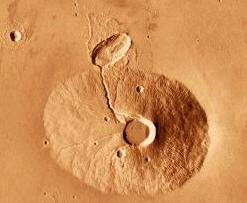 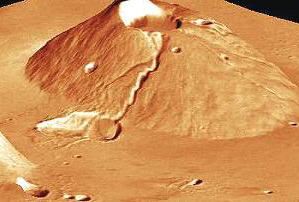 Photos Copyright © by Calvin J. Hamilton
A large oblique impact at the base of the Ceraunius Tholus volcano may have ejected material towards Earth. 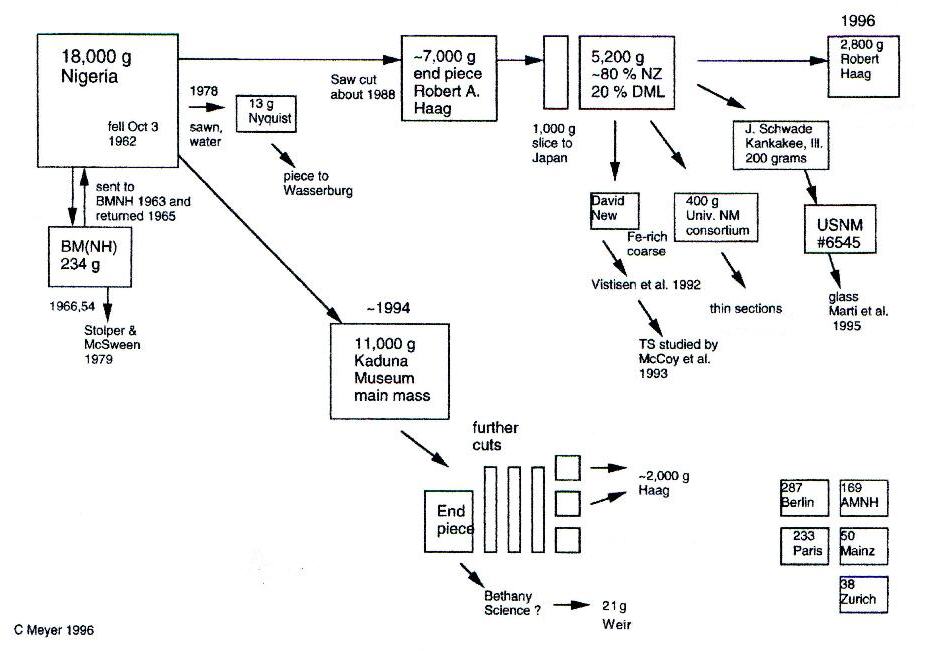