Lunar Mingled BrecciaWork in Progress ... A rock that is a mechanical mixture of different minerals and/or rock fragments (clasts). A breccia may also be distinguished by the origin of its clasts: (monomict breccia: monogenetic or monolithologic, and polymict breccia: polygenetic or polylithologic). The proportions of these fragments within the unbrecciated material
(basalt-bearing fragmental regolithMixture of unconsolidated rocky fragments, soil, dust and other fine granular particles blanketing the surface of a body lacking an atmosphere. Regolith is the product of "gardening" by repeated meteorite impacts, and thermal processes (such as repeated heating and cooling cycles).   breccia
predominantly feldspathic) 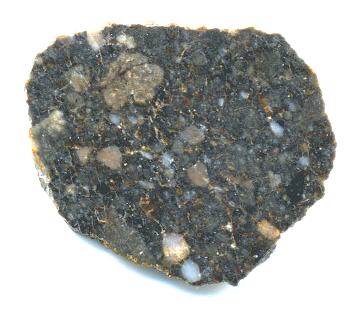 Found January 18, 2005
18° 54′ 52′ N., 54° 20′ 42′ E. A single elongated fusion-crusted stone, weighing 115.2 g, was found by Michael Farmer while searching for meteorites in Oman. A section of the meteoriteWork in progress. A solid natural object reaching a planet’s surface from interplanetary space. Solid portion of a meteoroid that survives its fall to Earth, or some other body. Meteorites are classified as stony meteorites, iron meteorites, and stony-iron meteorites. These groups are further divided according to their mineralogy and was submitted to Northern Arizona University (T. Bunch and J. Wittke) and Washington University in Seattle (R. Korotev) for analysis and classification, and Dhofar 1180 was determined to be a lunar meteorite unpaired to any other lunar findMeteorite not seen to fall, but recovered at some later date. For example, many finds from Antarctica fell 10,000 to 700,000 years ago.. 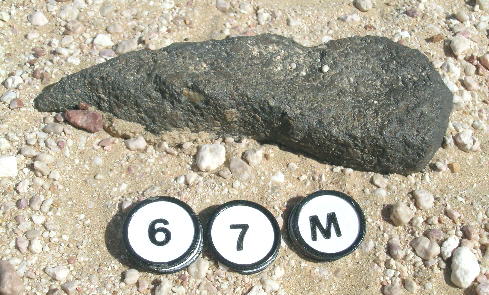