EucriteMost common type of achondrite meteorite and a member of the HED group. Eucrites are basalts composed primarily of pigeonite and anorthite (An60-98). Eucrites have been placed into three subgroups based on mineralogical and chemical differences. • Non-cumulate eucrites represent the upper crust that solidified on a magma ocean after, polymict, anomalous 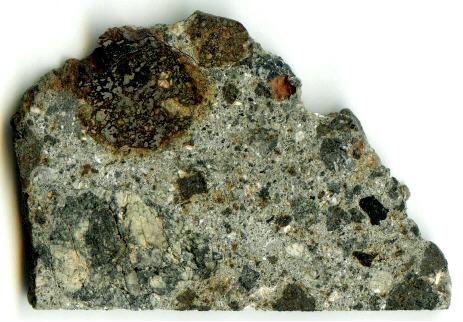 Purchased October 2015
no coordinates recorded Four pieces of a polymict eucriteMost common type of achondrite meteorite and a member of the HED group. Eucrites are basalts composed primarily of pigeonite and anorthite (An60-98). Eucrites have been placed into three subgroups based on mineralogical and chemical differences. • Non-cumulate eucrites represent the upper crust that solidified on a magma ocean after having a combined weight of 1,193 g were purchased by M. Jost from a Moroccan dealer. A type sample was sent to the University of Washington in Seattle (A. Irving and S. Kuehner) for analysis and classification, and NWA 10674 was determined to be an anomalous polymict eucrite brecciaWork in Progress ... A rock that is a mechanical mixture of different minerals and/or rock fragments (clasts). A breccia may also be distinguished by the origin of its clasts: (monomict breccia: monogenetic or monolithologic, and polymict breccia: polygenetic or polylithologic). The proportions of these fragments within the unbrecciated material. Northwest Africa 10674 is a complex breccia composed predominantly of eucritic clasts (orthopyroxeneOrthorhombic, low-Ca pyroxene common in chondrites. Its compositional range runs from all Mg-rich enstatite, MgSiO3 to Fe-rich ferrosilite, FeSiO3. These end-members form an almost complete solid solution where Mg2+ substitutes for Fe2+ up to about 90 mol. % and Ca substitutes no more than ~5 mol. % (higher Ca2+ contents occur with exsolved pigeoniteLow-Ca clinopyroxene, (Ca,Mg,Fe)SiO3, found as a major mineral in eucrites and shergottites. In order to be considered pigeonite, the clinopyroxene must contain 5 to 20 mol % of calcium (Wo5 - 20). Chondrites of petrologic types 4 and below contain significant low-Ca clinopyroxene. During metamorphism to higher temperatures, all existing and calcic plagioclaseAlso referred to as the plagioclase feldspar series. Plagioclase is a common rock-forming series of feldspar minerals containing a continuous solid solution of calcium and sodium: (Na1-x,Cax)(Alx+1,Si1-x)Si2O8 where x = 0 to 1. The Ca-rich end-member is called anorthite (pure anorthite has formula: CaAl2Si2O8) and the Na-rich end-member is albite) having variable textures, mixed with disaggregated eucrite-related clastic material. Minor phases in the eucrite breccia include silicaSilicon dioxide, SiO2. polymorph, chromiteBrownish-black oxide of chromium and iron (Cr-Fe oxide), Cr2FeO4, found in many meteorite groups., ilmeniteTi-Fe oxide, TiFeO3, found in achondrites, lunar mare basalts, and shergottites. Ilmenite forms as a primary mineral in mafic igneous rocks. It crystallizes relatively early out of a magma before most of the other minerals, and as a result, the heavier crystals of ilmenite precipitate to the bottom of the magma, troiliteBrass colored non-magnetic mineral of iron sulfide, FeS, found in a variety of meteorites. and fayalitePure* iron end-member (Fe2SiO4) of the olivine solid solution series and an important mineral in meteorites. When iron (Fe) is completely substituted by magnesium, it yields the the pure Mg-olivine end-member, forsterite (Mg2SiO4). The various Fe and Mg substitutions between these two end-members are described based on their forsteritic (Fo), as well as sparse diogentic clasts (~2 vol%). The meteoriteWork in progress. A solid natural object reaching a planet’s surface from interplanetary space. Solid portion of a meteoroid that survives its fall to Earth, or some other body. Meteorites are classified as stony meteorites, iron meteorites, and stony-iron meteorites. These groups are further divided according to their mineralogy and is unusual in that it contains abundant metal-bearing vitric breccia clasts (20 vol%) composed of magnesian silicates (orthopyroxene and olivineGroup of silicate minerals, (Mg,Fe)2SiO4, with the compositional endpoints of forsterite (Mg2SiO4) and fayalite (Fe2SiO4). Olivine is commonly found in all chondrites within both the matrix and chondrules, achondrites including most primitive achondrites and some evolved achondrites, in pallasites as large yellow-green crystals (brown when terrestrialized), in the silicate portion) interspersed with grains of FeNi-metal (kamaciteMore common than taenite, both taenite and kamacite are Ni-Fe alloys found in iron meteorites. Kamacite, α-(Fe,Ni), contains 4-7.5 wt% Ni, and forms large body-centered cubic crystals that appear like broad bands or beam-like structures on the etched surface of a meteorite; its name is derived from the Greek word) within glass. Interestingly, Warren et al. (2017) identified several cm-scale, metal-rich (12–17 vol%), ovoid silicateThe most abundant group of minerals in Earth's crust, the structure of silicates are dominated by the silica tetrahedron, SiO44-, with metal ions occurring between tetrahedra). The mesodesmic bonds of the silicon tetrahedron allow extensive polymerization and silicates are classified according to the amount of linking that occurs between the nodules in the polymict eucrite Camel Donga. These nodules are enriched in Ni and trace siderophile elements and lack other evidence for in situ reductionOxidation and reduction together are called redox (reduction and oxidation) and generally characterized by the transfer of electrons between chemical species, like molecules, atoms or ions, where one species undergoes oxidation, a loss of electrons,  while another species undergoes reduction, a gain of electrons. This transfer of electrons between reactants. They concluded that the metalElement that readily forms cations and has metallic bonds; sometimes said to be similar to a cation in a cloud of electrons. The metals are one of the three groups of elements as distinguished by their ionization and bonding properties, along with the metalloids and nonmetals. A diagonal line drawn nodules reflect the addition of an impactor component to the material that was precursory to Camel Donga. They speculate that this was a complex two-stage process involving metasomatic alteration by a reducingOxidation and reduction together are called redox (reduction and oxidation) and generally characterized by the transfer of electrons between chemical species, like molecules, atoms or ions, where one species undergoes oxidation, a loss of electrons,  while another species undergoes reduction, a gain of electrons. This transfer of electrons between reactants fluid that originated as a metal- and volatile-rich carbonaceous-chondritic (e.g., CM-type) contaminant. See the Camel Donga page for a photo and further details about this alteration process. The specimen of NWA 10674 shown above is a 7.08 g partial slice acquired from the Space Jewels Switzerland Collection of Marc Jost. Click on the top photos below to see magnified images. Another representative slice of NWA 10647 is also shown below, courtesy of Marc Jost. 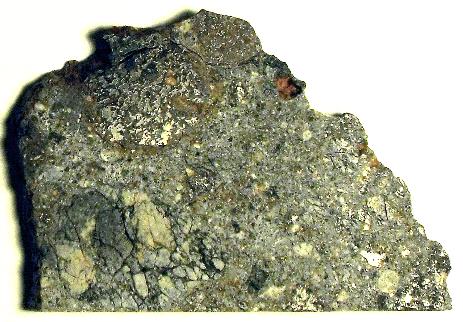 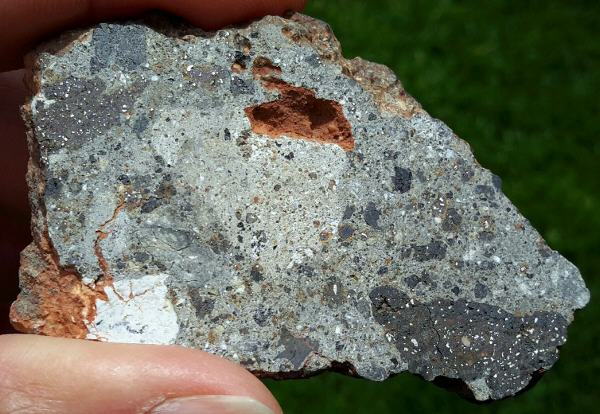 It is noteworthy that the anomalous howarditeOne type of meteorite in the HED (Howardite, Eucrite, Diogenite) achondrite group. Howardites are named after the English chemist Edward Howard (1774-1816), one of the pioneers of meteoritics. Consisting mostly of eucritic and diogenitic clasts and fragments, howardites are polymict breccias. However, they can also contain dark clasts of carbonaceous NWA 3197 exhibits a striking similarity to NWA 10674 in both its exterior and interior appearance; compare the photo of NWA 10674 individuals and slices below to photos of NWA 3197 on the webpage of J. Utas here. Among the differences that do exist between these two meteorites is the fact that no recrystallized H chondriteOrdinary chondrites with a high content of free Ni-Fe metal (15-19 vol. %) and attracted easily to a magnet. Their main minerals are olivine (Fa16-20) and the orthopyroxene bronzite (Fs14.5-18.5), earning them their older name of bronzite chondrites. Chondrules average ~0.3 mm in diameter. Comparison of the reflectance spectra of clasts have been observed in the NWA 10674 samples analyzed. 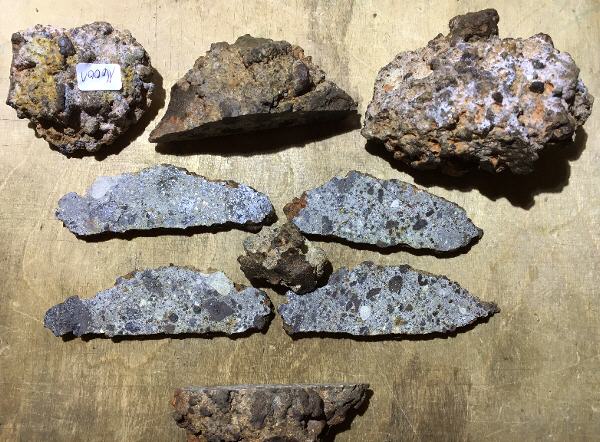