EucriteMost common type of achondrite meteorite and a member of the HED group. Eucrites are basalts composed primarily of pigeonite and anorthite (An60-98). Eucrites have been placed into three subgroups based on mineralogical and chemical differences. • Non-cumulate eucrites represent the upper crust that solidified on a magma ocean after
Polymict brecciaGeneral term for all breccias that are neither monomict nor dimict. Modified from image source: http://www.saharamet.com/meteorite/gallery/HED/index.html., cumulateIgneous rock composed of crystals that have grown and accumulated (often by gravitational settling) in a cooling magma chamber.
(or mesosideriteOne of two main types of stony-iron meteorite, the other being pallasites. Mesosiderites are a mixture of approximately 50% basaltic, gabbroic and orthopyroxenitic silicates and 50% Ni-Fe metal and sulfides. The name derives from the Greek "mesos" meaning "middle" or "half" and "sideros" for "iron;" hence "half-iron". The silicates are inclusionFragment of foreign (xeno-) material enclosed within the primary matrix of a rock or meteorite.) 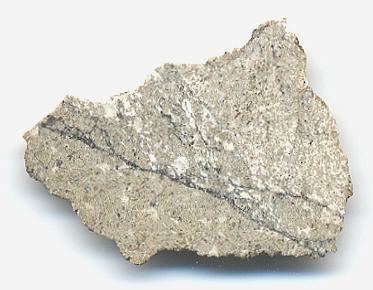 Diagram credit: Greenwood et al., Chemie der Erde, vol. 77, p. 25 (2017)
‘Melting and differentiationA process by which a generally homogeneous chondritic body containing mostly metal, silicates and sulfides will melt and form distinct (differentiated) layers of different densities.   When the melting process continues for a long enough period of time, the once chondritic body will re-partition into layers of different composition including of early-formed asteroids: The perspective from high precision oxygen isotopeOne of two or more atoms with the same atomic number (Z), but different mass (A). For example, hydrogen has three isotopes: 1H, 2H (deuterium), and 3H (tritium). Different isotopes of a given element have different numbers of neutrons in the nucleus. studies’
(open access: http://dx.doi.org/10.1016/j.chemer.2016.09.005) The unbrecciated eucrite-like achondriteAn achondrite is a type of stony meteorite whose precursor was of chondritic origin and experienced metamorphic and igneous processes. They have a planetary or differentiated asteroidal origin where the chondritic parent body reached a sufficient size that through heating due to radioactive decay of 26Al (aluminum isotope) and gravitational EET 92023 exhibits important petrological and O-isotopic similarities to the coarse-grained clasts in Dhofar 007, and it has been considered that the two might be genetically related. In their study of EET 92023, Yamaguchi et al. (2017) determined that its source rock experienced a multistage thermal history including a very early impact by a IAB or IVA iron projectile, but evidence indicates that its anomalous O-isotopic signature is indigenous rather than the result of impactor contamination. It has not yet been determined if the similar O-isotopic signature of Dhofar 007 is also indigenous or is instead due to impactor contamination. In addition to Dhofar 007 and EET 92023, a number of anomalous eucritic meteorites are known including Ibitira, Pasamonte, NWA 1240, PCA 82502/91007, Bunburra Rockhole, A-881394, and Emmaville, each of which are resolved from typical eucrites and the HED parent body both isotopically and compositionally. It is notable that EET 92023, Bunburra Rockhole, and A-881394 have close O-isotope values, which suggests the possibility of a genetic relationship (Barrett et al., 2017, O-isotopic diagram 1; Mittlefehldt et al., 2018, O-isotopic diagram 2). Another useful tool to help resolve potential genetic relationships among meteorites is the Fe/Mn ratio. While Fe and Mn do experience nebular fractionations, they are not readily fractionated during parent body igneous processing, and therefore different Fe/Mn values are inherent in different parent objects. Mittlefehldt et al. (2017) utilized a number of eucrites and anomalous eucrite meteorites, including A-881394, EET 92023, Ibitira, and Emmaville, to compare the Fe/Mn and Fe/Mg ratios for low-Ca pyroxenes. Contrary to the results from O-isotopic analyses, these four meteorites plot in separate locations on an Fe/Mn vs. Fe/Mg coupled diagram, which suggests that they derive from separate parent bodies (see diagram below). Moreover, although Bunburra Rockhole and A-881394 have overlapping oxygen and chromium isotope compositions, new in-depth analyses of Bunburra Rockhole conducted by Benedix et al. (2017, and references therein) have revealed that these two meteorites have very different textures and mineral chemistries; e.g., Bunburra Rockhole has plagioclase with An87–90, while A-881394 has plagioclase with An98. Based on their results, they consider it likely that these two meteorites derive from separate parent bodies. Further details about the anomalous eucrites can be found on the Pasamonte page. 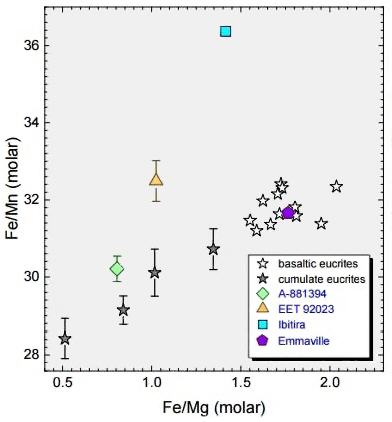