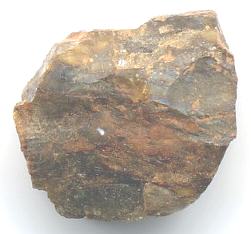 Purchased Spring 2005
no coordinates recorded A fragmented stone weighing 252 g was collected in Algeria from a similar location as NWA 2968. The fragments were subsequently purchased in Er-Rachidia, Morocco by collector F. Kuntz. A sample of these fragments was analyzed at the University of Washington at Seattle (A. Irving and S. Kuehner) and NWA 3329 was determined to be a diogeniteDiogenites belong to the evolved achondrite HED group that also includes howardites and eucrites. They are named after the Greek philosopher Diogenes of Apollonia, of the 5th century BCE, who was the first to suggest that meteorites come from outer space (a realization forgotten for over 2,000 years). They are composed primarily of coarse-grained, dark brown orthopyroxene, together with interstitialTerm applied to ions or atoms occupying sites between lattice points. plagioclaseAlso referred to as the plagioclase feldspar series. Plagioclase is a common rock-forming series of feldspar minerals containing a continuous solid solution of calcium and sodium: (Na1-x,Cax)(Alx+1,Si1-x)Si2O8 where x = 0 to 1. The Ca-rich end-member is called anorthite (pure anorthite has formula: CaAl2Si2O8) and the Na-rich end-member is albite, silicaSilicon dioxide, SiO2., phosphate, FeNi-metal, and FeS.

The NWA 3329 fragments were subsequently studied by Barrat et al. (2010). Interestingly, some fragments from the batch were found to be identical to the dunitic diogenite NWA 2968, and petrographic evidence indicates that both lithologies were collected from the same location, with both showing similar degrees of weathering. Importantly, other recovered fragments consist of both lithologies together—diogenite and dunite—which are each identical to their respective type samples. Furthermore, trace elementSubstance composed of atoms, each of which has the same atomic number (Z) and chemical properties. The chemical properties of an element are determined by the arrangement of the electrons in the various shells (specified by their quantum number) that surround the nucleus. In a neutral atom, the number of studies conducted on both lithologies were found to be consistent with pairing, and their Δ17O values are indistinguishable as well (Greenwood et al., 2015). These investigators, in accord with an earlier suggestion by Barrat et al. (2010), interpret the evidence to indicate that both the orthopyroxenite and dunite lithologies are fragments from a common fallMeteorite seen to fall. Such meteorites are usually collected soon after falling and are not affected by terrestrial weathering (Weathering = 0). Beginning in 2014 (date needs confirmation), the NomComm adopted the use of the terms "probable fall" and "confirmed fall" to provide better insight into the meteorite's history. If, likely as components of a mesosideriteOne of two main types of stony-iron meteorite, the other being pallasites. Mesosiderites are a mixture of approximately 50% basaltic, gabbroic and orthopyroxenitic silicates and 50% Ni-Fe metal and sulfides. The name derives from the Greek "mesos" meaning "middle" or "half" and "sideros" for "iron;" hence "half-iron". The silicates are. It was also noted by Greenwood et al. (2015) that the REEOften abbreviated as “REE”, these 16 elements include (preceded by their atomic numbers): 21 scandium (Sc), 39 Yttrium (Y) and the 14 elements that comprise the lanthanides excluding 61 Promethium, an extremely rare and radioactive element. These elements show closely related geochemical behaviors associated with their filled 4f atomic orbital. pattern previously determined for the diogenite NWA 5613 (Barrat et al., 2010) is virtually identical to that for NWA 3329. Further evidence for a mesosiderite–HED genetic relationship is revealed by the identical Δ17O values among the diogenitesDiogenites belong to the evolved achondrite HED group that also includes howardites and eucrites. They are named after the Greek philosopher Diogenes of Apollonia, of the 5th century BCE, who was the first to suggest that meteorites come from outer space (a realization forgotten for over 2,000 years). They are, such as NWA 3329 and NWA 2968, and the olivine-rich (dunite) clasts that have been identified in most all mesosiderites (Greenwood et al., 2015, 2017). It is considered likely that the dunitic clasts in mesosiderites were initially formed as upper-crustal plutonicGeology: Igneous intrusive body that forms when magma is injected into host rocks and solidifies. Plutons occur in the crust of asteroids undergoing differentiation or planets. Named after Pluto, the Roman god of the underworld. Plutonic rocks are the rocks found within a pluton. Astronomy: Category of planet including all cumulates, which were subsequently disrupted through impacts and incorporated with other HED lithologies prior to the formation of the mesosiderites. 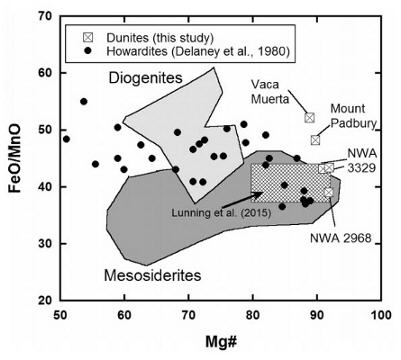 Diagram credit: Greenwood et al., 2017
For an explanation of the diagram components see the open access article in Chemie der Erde – Geochemistry, vol. 77, p. 25 (2017)
‘Melting and differentiationA process by which a generally homogeneous chondritic body containing mostly metal, silicates and sulfides will melt and form distinct (differentiated) layers of different densities.   When the melting process continues for a long enough period of time, the once chondritic body will re-partition into layers of different composition including of early-formed asteroids: The perspective from high precision oxygen isotope studies’
(http://dx.doi.org/10.1016/j.chemer.2016.09.005) A comparison of reflectance spectra of seven near-Earth asteroids to those of HED-group meteorites revealed that all of the pyroxeneA class of silicate (SiO3) minerals that form a solid solution between iron and magnesium and can contain up to 50% calcium. Pyroxenes are important rock forming minerals and critical to understanding igneous processes. For more detailed information, please read the Pyroxene Group article found in the Meteoritics & Classification category. mineralogies were consistent with eucritesMost common type of achondrite meteorite and a member of the HED group. Eucrites are basalts composed primarily of pigeonite and anorthite (An60-98). Eucrites have been placed into three subgroups based on mineralogical and chemical differences. • Non-cumulate eucrites represent the upper crust that solidified on a magma ocean after and howardites, but not to diogenites. Therefore, they suggest that there are no km-sized or larger objects composed strictly of diogenite material, but instead, diogenites might exist as a single component within a mixture of lithologies on the HED asteroid. Beck et al. (2012) identified the first olivine-rich melt material present in the howardites of the PCA 02009 pairing group. This olivine-rich material was likely derived from harzburgitic and dunitic lithologies exposed on the surface of VestaThird largest and fourth brightest asteroid; it was discovered in 1807 by Heinrich Olbers and named for the ancient Roman goddess of the hearth. 4 Vesta has a basaltic surface composition and an average density not much less than that of Mars. Evidently lava once flowed here indicating that the. Further investigation employing the Antarctic DOM 10 howarditeOne type of meteorite in the HED (Howardite, Eucrite, Diogenite) achondrite group. Howardites are named after the English chemist Edward Howard (1774-1816), one of the pioneers of meteoritics. Consisting mostly of eucritic and diogenitic clasts and fragments, howardites are polymict breccias. However, they can also contain dark clasts of carbonaceous pairing group was conducted by Hahn et al. (2018). They sought to identify Mg-rich harzburgitic (distinguished from diogenitic) silicates (Mg# >80 and >85 for olivineGroup of silicate minerals, (Mg,Fe)2SiO4, with the compositional endpoints of forsterite (Mg2SiO4) and fayalite (Fe2SiO4). Olivine is commonly found in all chondrites within both the matrix and chondrules, achondrites including most primitive achondrites and some evolved achondrites, in pallasites as large yellow-green crystals (brown when terrestrialized), in the silicate portion and pyroxene, respectively) that represent HED mantleMain silicate-rich zone within a planet between the crust and metallic core. The mantle accounts for 82% of Earth's volume and is composed of silicate minerals rich in Mg. The temperature of the mantle can be as high as 3,700 °C. Heat generated in the core causes convection currents in material. From results of a comprehensive geochemical analysis, they contend that these Mg-rich fragments are not related to cumulateIgneous rock composed of crystals that have grown and accumulated (often by gravitational settling) in a cooling magma chamber. diogenites, but instead are more consistent with a mantle residue that was affected by a late infiltration of metasomatic melt. In addition, they determined that QUE 93148 also likely represents a mantle residue from the HED parent bodyThe body from which a meteorite or meteoroid was derived prior to its ejection. Some parent bodies were destroyed early in the formation of our Solar System, while others like the asteroid 4-Vesta and Mars are still observable today.. The larger degree of partial meltingAn igneous process whereby rocks melt and the resulting magma is comprised of the remaining partially melted rock (sometimes called restite) and a liquid whose composition differs from the original rock. Partial melting occurs because nearly all rocks are made up of different minerals, each of which has a different melting (~35–55%) required to produce the observed Mg-rich lithologies, considered to be mantle residua, is attributed by Hahn et al. (2018) to a hybrid magma oceanCompletely molten surfaces of terrestrial planets or moons that formed soon after accretion. Samples returned by the Apollo missions provide evidence of a lunar magma ocean, crystallization of which produced a stratified Moon with a low-density crust formed by accumulation of the mineral plagioclase overlying a higher density mantle of model that combines aspects of the magmaMolten silicate (rock) beneath the surface of a planetary body or moon. When it reaches the surface, magma is called lava. ocean model of Mandler and Elkins-Tanton (2013) and the shallow magma ocean model of Neumann et al. (2014) (see diagrams B and D below).

click on image for a magnified view Diagram credit: Hahn et al., MAPS, vol. 53, #3, p. 541 (2018)
‘Mg-rich harzburgites from Vesta: Mantle residua or cumulates from planetary differentiation?’
(http://dx.doi.org/10.1111/maps.13036) Further information regarding the origin of the dunitic clasts in our collections can be found on the Vaca Muerta page. To see an alternative classification systemDefinable part of the universe that can be open, closed, or isolated. An open system exchanges both matter and energy with its surroundings. A closed system can only exchange energy with its surroundings; it has walls through which heat can pass. An isolated system cannot exchange energy or matter with for the diogenites and dunites based on mineralogical and petrographical features, proposed by Beck and McSween (2010) and modified by Wittke et al. (2011), click here. The photo shown above is a 0.52g fragment of NWA 3329. The photo below is an excellent petrographic thin sectionThin slice or rock, usually 30 µm thick. Thin sections are used to study rocks with a petrographic microscope. micrograph of NWA 3329, shown courtesy of Peter Marmet.