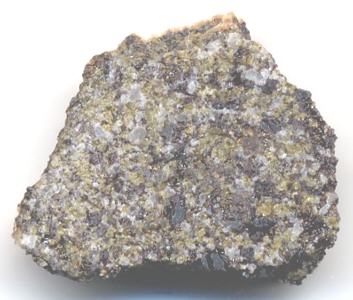 Found May 2007
coordinates not recorded Four fragments comprising a single 252 g individual stone meteoriteWork in progress. A solid natural object reaching a planet’s surface from interplanetary space. Solid portion of a meteoroid that survives its fall to Earth, or some other body. Meteorites are classified as stony meteorites, iron meteorites, and stony-iron meteorites. These groups are further divided according to their mineralogy and was found in Algeria and purchased by G. Hupé in Erfoud, Morocco. This is a friable meteorite in which the fusion crustMelted exterior of a meteorite that forms when it passes through Earth’s atmosphere. Friction with the air will raise a meteorite’s surface temperature upwards of  4800 K (8180 °F) and will melt (ablate) the surface minerals and flow backwards over the surface as shown in the Lafayette meteorite photograph below. has been eroded away by prolonged terrestrial weathering processes, leaving only oxidationOxidation and reduction together are called redox (reduction and oxidation) and generally characterized by the transfer of electrons between chemical species, like molecules, atoms or ions, where one species undergoes oxidation, a loss of electrons,  while another species undergoes reduction, a gain of electrons. This transfer of electrons between reactants products on its surface. An analysis was conducted at the University of Washington in Seattle (A. Irving and S. Kuehner), and it was ascertained that NWA 4801 is a plutonic igneous cumulateIgneous rock composed of crystals that have grown and accumulated (often by gravitational settling) in a cooling magma chamber. angriteType of evolved achondrite meteorite that represent some of the earliest stages of asteroidal differentiation and magmatism in our solar system. Angrites are named for the Angra dos Reis meteorite, which fell in Rio de Janeiro, Brazil, in early 1869. They are basaltic (mafic) rocks, often containing porous areas, and.

Diagram credit: Papike et al., 48th LPSC, #2688 (2017) In connection with their in-depth study of NWA 5363/5400, Burkhardt et al. (2017) published comparative data for nucleosynthetic anomalies among parent bodies for O, Cr, Ca, Ti, Ni, Mo, Ru and Nd. It is interesting to note that with the exception of ε48Ca (no angrite data is available for ε100Ru), NWA 5363/5400 and angrites have values for each of these isotopic anomalies that are nearly the same or overlap within uncertainties. Results of their studies indicate that while both angrites and NWA 5363/5400 have Δ17O values indistinguishable from Earth, and that other anomaly values for angrites overlap with Earth within uncertainties (ε92Ni, ε92Mo, ε145Nd), the ε54Cr and ε50Ti values for angrites are distinct from Earth. Based on their studies, Burkhardt et al. (2017) concluded that the parent body of NWA 5363/5400, and perhaps by extention that of angrites, originated in a unique nebular isotopic reservoir most similar to that of enstatiteA mineral that is composed of Mg-rich pyroxene, MgSiO3. It is the magnesium endmember of the pyroxene silicate mineral series - enstatite (MgSiO3) to ferrosilite (FeSiO3). and ordinary chondritesChondrites are the most common meteorites accounting for ~84% of falls. Chondrites are comprised mostly of Fe- and Mg-bearing silicate minerals (found in both chondrules and fine grained matrix), reduced Fe/Ni metal (found in various states like large blebs, small grains and/or even chondrule rims), and various refractory inclusions (such. The CRE age calculated for NWA 4801 is 31.6 (±1.5) m.y. (Nakashima et al., 2008). A more precise noble gasElement occurring in the right-most column of the periodic table; also called "inert" gases. In these gases, the outer electron shell is completely filled, making them very unreactive. analysis conducted by Nakashima et al. (2018) established a CRE age for NWA 4801 of 26.4 (±6.1) m.y. Multiple episodes of impact, disruption, and dissemination of the crust can be inferred by the wide range of CRE ages determined for the angrites—<0.2–56 m.y. for thirteen angrites measured to date, possibly representing as many ejection events (Nakashima et al., 2008; Wieler et al., 2016; Nakashima et al., 2018). This range is consistent with a single large parent body enduring multiple impacts over a very long period of time, which would suggest that the parent object resides in a stable orbit (planetary or asteroid beltBelt located between 2.12 and 3.3 AU from the Sun and located between the orbits of Mars and Jupiter containing the vast majority of asteroids. The asteroid belt is also termed the main asteroid belt or main belt to distinguish it from other asteroid populations in the Solar System such) permitting continuous sampling over at least the past 56 m.y. Alternatively, Nakashima et al. (2018) consider it plausible that there is currently at least two angrite (daughter) objects occupying distinct orbits: one representing the fine-grained (quenched) angrites with the shorter CRE age range of <0.2–22 m.y., and another representing the coarse-grained (plutonic) angrites with the longer CRE age range of 18–56 m.y. (see diagram below). Cosmic-ray Exposure Ages of Angrites

Diagram credit: Nakashima et al., MAPS, Early View, p. 14 (2018)
‘Noble gases in angrites Northwest Africa 1296, 2999/4931, 4590, and 4801: Evolution history inferred from noble gas signatures’
(http://dx.doi.org/10.1111/maps.13039) Although NWA 4801 has been remagnetized by hand magnets, a study by Weiss et al. (2008) of remanent magnetismAlso called residual magnetism, refers to the permanent magnetization preserved within the ferromagnetic minerals inside rocks, like meteorites. The presence of a magnetic field assumes and requires a differentiated parent body that contained a liquid core sometime in its past. When a rock cools below its Curie temperature, it acquires in angrites revealed that a magnetic field with a strength of ~10 µT, ~20% of that of present-day Earth, was imparted to the angrite PB during its earliest phase of crystallization (as observed particularly from the angrite D’Orbigny). This magnetic field could be attributed to a number of possible causes such as accretion to an orbit in close proximity to the early T-Tauri phase solar field, or perhaps more likely, to a magnetic field generated by an internal core-dynamo mechanism. Small fine-grained basaltBasalt is the most common extrusive igneous rock on the terrestrial planets. For example, more than 90% of all volcanic rock on Earth is basalt. The term basalt is applied to most low viscosity dark silicate lavas, regardless of composition. Basalt is a mafic, extrusive and fine grained igneous rock clasts exhibiting textures and mineralogy generally consistent with a quenched angrite-like impactor are preserved in impact melt glass fragments recovered from a significant impact event that occurred ~5.28 m.y. ago near Bahía Blanca, Argentina (Schultz et al., 2006; Harris and Schultz, 2009, 2017; see photo below). This impactor is considered to have been very large, perhaps at least one km³, and its source object could plausibly reside near the Earth–Moon systemDefinable part of the universe that can be open, closed, or isolated. An open system exchanges both matter and energy with its surroundings. A closed system can only exchange energy with its surroundings; it has walls through which heat can pass. An isolated system cannot exchange energy or matter with. Interestingly, analyses of other grains obtained from Bahía Blanca impact melt glass have a geochemistryStudy of the chemical composition of Earth and other planets, chemical processes and reactions that govern the composition of rocks and soils, and the cycles of matter and energy that transport Earth's chemical components in time and space. similar to the Moon (Harris and Schultz, 2017).