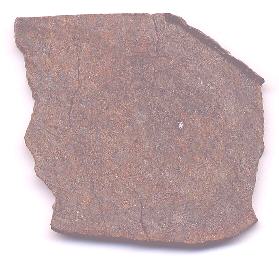 Purchased before 2005
no coordinates recorded A single 45 g stone was found in Northwest Africa and sold in Erfoud, Morocco to a collector. A sample was submitted for analysis and classification to Northern Arizona University (T. Bunch), and Planetary Studies Foundation (P. Sipiera). Northwest Africa 3330 was determined to be a chondriteChondrites are the most common meteorites accounting for ~84% of falls. Chondrites are comprised mostly of Fe- and Mg-bearing silicate minerals (found in both chondrules and fine grained matrix), reduced Fe/Ni metal (found in various states like large blebs, small grains and/or even chondrule rims), and various refractory inclusions (such with anomalous fayalitePure* iron end-member (Fe2SiO4) of the olivine solid solution series and an important mineral in meteorites. When iron (Fe) is completely substituted by magnesium, it yields the the pure Mg-olivine end-member, forsterite (Mg2SiO4). The various Fe and Mg substitutions between these two end-members are described based on their forsteritic (Fo) (Fa21.8) and ferrosiliteA mineral that is composed of Fe-rich pyroxene, FeSiO3. It is the iron endmember of the pyroxene silicate mineral series – enstatite (MgSiO3) to ferrosilite (FeSiO3). (Fs18.8) ranges, and was assigned to the transitional H/L chondrite group. The H/L group comprises a couple of dozen members, most of which might represent a distinct ordinary chondriteWork in Progress Ordinary chondrites (OCs) are the largest meteorite clan, comprising approximately 87% of the global collection and 78% of all falls (Meteoritical Society database 2018)1. Meteorites & the Early Solar System: page 581 section 6.1 OC of type 5 or 6 with an apparent shock stage of S1, parent bodyThe body from which a meteorite or meteoroid was derived prior to its ejection. Some parent bodies were destroyed early in the formation of our Solar System, while others like the asteroid 4-Vesta and Mars are still observable today.. Northwest Africa 3330 is either a representative of this distinct parent body, or alternatively, it could indicate that the Fa and Fs ranges for the H and L parent bodies need to be extended. The potential identification of other chemical and petrographic characteristics inconsistent with those of the H and L parent bodies would help settle this question.

A petrologic typeMeasure of the degree of aqueous alteration (Types 1 and 2) and thermal metamorphism (Types 3-6) experienced by a chondritic meteorite. Type 3 chondrites are further subdivided into 3.0 through 3.9 subtypes. of 5 was assigned to this meteoriteWork in progress. A solid natural object reaching a planet’s surface from interplanetary space. Solid portion of a meteoroid that survives its fall to Earth, or some other body. Meteorites are classified as stony meteorites, iron meteorites, and stony-iron meteorites. These groups are further divided according to their mineralogy and, a rare type currently shared by only seven other transitional H/L chondritesChondrites are the most common meteorites accounting for ~84% of falls. Chondrites are comprised mostly of Fe- and Mg-bearing silicate minerals (found in both chondrules and fine grained matrix), reduced Fe/Ni metal (found in various states like large blebs, small grains and/or even chondrule rims), and various refractory inclusions (such. Northwest Africa 3330 has been shocked to stage S2 and has experienced terrestrial weathering consistent with grade W3. The specimen of NWA 3330 shown above is a 1.26 g partial slice.