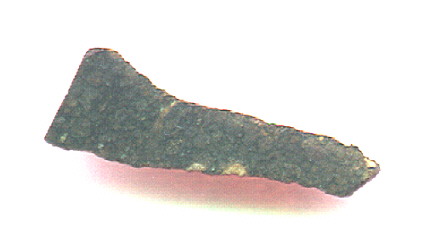 Found August 1966
38° 15′ N., 98° 40′ W. A single stone weighing 7.25 kg was found by M. Neufeldt during plowing in McPherson County, Kansas. It was taken to the Kansas State University Geology Department for analysis and subsequently classified as an L3 chondriteChondrites are the most common meteorites accounting for ~84% of falls. Chondrites are comprised mostly of Fe- and Mg-bearing silicate minerals (found in both chondrules and fine grained matrix), reduced Fe/Ni metal (found in various states like large blebs, small grains and/or even chondrule rims), and various refractory inclusions (such with a shock stageA petrographic assessment, using features observed in minerals grains, of the degree to which a meteorite has undergone shock metamorphism. The highest stage observed in 25% of the indicator grains is used to determine the stage. Also called "shock level".               of S2. The mass as found was moderately weathered but still had shallow regmaglypts over most of its surface. Fusion crustMelted exterior of a meteorite that forms when it passes through Earth’s atmosphere. Friction with the air will raise a meteorite’s surface temperature upwards of  4800 K (8180 °F) and will melt (ablate) the surface minerals and flow backwards over the surface as shown in the Lafayette meteorite photograph below. was thin and missing on some portions of the surface.

Inman does not strictly follow the ordinary chondriteWork in Progress Ordinary chondrites (OCs) are the largest meteorite clan, comprising approximately 87% of the global collection and 78% of all falls (Meteoritical Society database 2018)1. Meteorites & the Early Solar System: page 581 section 6.1 OC of type 5 or 6 with an apparent shock stage of S1, metal–silicateThe most abundant group of minerals in Earth's crust, the structure of silicates are dominated by the silica tetrahedron, SiO44-, with metal ions occurring between tetrahedra). The mesodesmic bonds of the silicon tetrahedron allow extensive polymerization and silicates are classified according to the amount of linking that occurs between the trends for classification. It has a total iron content of 19.45 wt% placing it in the range of the LL group (18.5–21.5 wt%), although this could also be due to terrestrial leaching. The average fayalitePure* iron end-member (Fe2SiO4) of the olivine solid solution series and an important mineral in meteorites. When iron (Fe) is completely substituted by magnesium, it yields the the pure Mg-olivine end-member, forsterite (Mg2SiO4). The various Fe and Mg substitutions between these two end-members are described based on their forsteritic (Fo) content of 21 mole% places it at the extreme lower end of the L group (22.7–25.6 mole%), biased towards the H group range (16.9–20.4 mole%); nevertheless, the Fa in certain olivines approaches 33 mole%, which is in the LL group range (27.0–33.0 mole%). There is a broad range in ferrosiliteA mineral that is composed of Fe-rich pyroxene, FeSiO3. It is the iron endmember of the pyroxene silicate mineral series – enstatite (MgSiO3) to ferrosilite (FeSiO3). content averaging near 15 mole%, slightly outside the range of the L group (18.7–21.8 mole%) and also biased towards the H group range (15.7–18.1 mole%). Other elemental ratios are comparable to the L group; an Fe/SiO ratio of 0.46, and a metallic nickel-iron content of 7.94 wt% (L group = 4.4–11.7 wt%). Evidence is slowly building in favor of a separate L/LL chondrite parent bodyThe body from which a meteorite or meteoroid was derived prior to its ejection. Some parent bodies were destroyed early in the formation of our Solar System, while others like the asteroid 4-Vesta and Mars are still observable today.. In 1990, a brecciated chondrite fell in Glanerbrug, Netherlands, consisting of two distinct lithologies: a dark-gray portion with olivineGroup of silicate minerals, (Mg,Fe)2SiO4, with the compositional endpoints of forsterite (Mg2SiO4) and fayalite (Fe2SiO4). Olivine is commonly found in all chondrites within both the matrix and chondrules, achondrites including most primitive achondrites and some evolved achondrites, in pallasites as large yellow-green crystals (brown when terrestrialized), in the silicate portion plotting at the high end of the LL field, and a light-gray portion with olivine plotting at the high end of the L field. Further analysis finds that a kamaciteMore common than taenite, both taenite and kamacite are Ni-Fe alloys found in iron meteorites. Kamacite, α-(Fe,Ni), contains 4-7.5 wt% Ni, and forms large body-centered cubic crystals that appear like broad bands or beam-like structures on the etched surface of a meteorite; its name is derived from the Greek word vs. olivine plot of the light portion falls within the L/LL field. A similar plot of the dark portion ranges widely within the LL field. Siderophiles of the light portion appear to be LL like. It is suggested that the light portion is a xenolithic L/LL fragment incorporated into a dark LL chondriteOrdinary chondrites ("low Fe" / "low metal") with only 1 to 3% free metal. Their olivine is more Fe-rich than in the other ordinary chondrites (Fa27-32), implying that the LL types must have formed under more oxidizing conditions than their H or L cousins. Orthopyroxene compositions are also Fe-the rich host. It was demonstrated by Szurgot (2016) that the mean atomic weightMass of a neutral atom of a nuclide - also called "atomic weight." The atomic weight of an element is the weighted average of each isotope. (Amean) of meteorites can be used to resolve the OC groups, including the intermediate groups L/LL and H/L. Amean values can also be predicted through various equations based on other parameters such as atomic Fe/Si ratio, grain densityMass of an object divided by its volume. Density is a characteristic property of a substance (rock vs. ice, e.g.). Some substances (like gases) are easily compressible and have different densities depending on how much pressure is exerted upon them. The Sun is composed of compressible gases and is much, and magnetic susceptibility, and these Amean values all consistently resolve these groups into the ordered sequence LL < L/LL < L < H/L < H. Inman has Amean values of 23.49 (chemical composition) and 23.08 (Fe/Si atomic ratio), with the former but not the latter value indicative of an L/LL classification. Furthermore, it was demonstrated that Amean values are lower for unequilibrated type 3 samples than for equilibrated samples within each OC group due to the presence of water; Amean values for petrologic types 4–6 are indistinguishable within each group.

Diagram credit: M. Szurgot, 47th LPSC, #2180 (2016)
Amean based on chemical composition (Eq. 1), Fe/Si atomic ratio (Eq. 2), and grain density (Eq. 3) Inman also has a distinctly different silicon isotopic composition compared to other meteorites. Contained within a SiC carrier is an abundance of interstellar noble gasesElement occurring in the right-most column of the periodic table; also called "inert" gases. In these gases, the outer electron shell is completely filled, making them very unreactive. including exotic Ne and Xe. It is calculated that Inman would have had to spend ~1.5 m.y. in a regolithMixture of unconsolidated rocky fragments, soil, dust and other fine granular particles blanketing the surface of a body lacking an atmosphere. Regolith is the product of "gardening" by repeated meteorite impacts, and thermal processes (such as repeated heating and cooling cycles).   setting, in addition to the 20 m.y. in space as inferred by its CRE age, to account for its fraction of anomalous noble gases. Two different forms of silicon nitride, or nierite, have also been identified in Inman (see the Indarch page for formation details). A most surprising result was obtained from the use of Raman microspectrometry techniques. Studies of the carbonElement commonly found in meteorites, it occurs in several structural forms (polymorphs). All polymorphs are shown to the left with * indicating that it been found in meteorites and impact structures: a. diamond*; b. graphite*; c. lonsdalite*; d. buckminsterfullerene* (C60); e. C540; f. C70; g. amorphous carbon; h. carbon nanotube*. structural order as it relates to petrography infer that Inman has a petrologic typeMeasure of the degree of aqueous alteration (Types 1 and 2) and thermal metamorphism (Types 3-6) experienced by a chondritic meteorite. Type 3 chondrites are further subdivided into 3.0 through 3.9 subtypes. of 3.0/3.1 rather than the commonly accepted 3.4 type. In a similar way, TL sensitivity data for Inman are consistent with its being a petrologic type 3.3, and it has in fact been studied as an LL3.3 as well as an LL3.4. Much of the confusion over its petrologic type probably lies with the fact that Inman is terrestrially contaminated. However, this terrestrial alteration cannot explain its anomalously high 15N enrichment, which is thought to be likely caused by the presence of a pristine component. Other meteorites assigned to this intermediate chondrite group include Seemore Downs (L/LL4), Bjurböle (L/LL4), Cynthiana (L/LL4), Knyahinya (L/LL5), Nyirábrany (L/LL4-5), Chelyabinsk (L/LL5; Szurgot, 2016), and Naryilco (L/LL6).The specimen of Inman shown above is a 1.4 g edge fragment removed during thin sectionThin slice or rock, usually 30 µm thick. Thin sections are used to study rocks with a petrographic microscope. preparation.