Fell July 19, 1912
34° 54′ N., 110° 11′ W. Accompanied by detonations heard for miles around, local residents observed a smoke trail over Navajo County, Arizona at 7:15 in the evening. A large terminal explosion, which was heard at least 40 miles away, was followed by a rapid series of smaller explosions and a long-lasting thunder-like rumbling, leaving a smoky trail in its wake (‘Holbrook Argus’, July 26, 1912). Multiple fragmentations occurred, with an estimated 16,000+ stones falling near the Aztec railroad yard, pelting the metalElement that readily forms cations and has metallic bonds; sometimes said to be similar to a cation in a cloud of electrons. The metals are one of the three groups of elements as distinguished by their ionization and bonding properties, along with the metalloids and nonmetals. A diagonal line drawn roofs and raising clouds of dust in the surrounding desert. Then seventeen-year-old Pauline McCleve later recalled, ‘that was the loudest sound I ever heard in my life’. A combined weight of over 536 pounds was recovered, ranging in size from 14.5 pounds to pea-sized and smaller. The famous Adamana, or ‘Venus Stone’, has been speculated by some to be the nosecone of the Holbrook meteoroidSmall rocky or metallic object in orbit around the Sun (or another star). (see Marcin Cimala’s video below).

The disruption occurred at a high enough altitude to enable fusion crustMelted exterior of a meteorite that forms when it passes through Earth’s atmosphere. Friction with the air will raise a meteorite’s surface temperature upwards of  4800 K (8180 °F) and will melt (ablate) the surface minerals and flow backwards over the surface as shown in the Lafayette meteorite photograph below. to form on even the smallest fragments. To this day specimens of this meteoriteWork in progress. A solid natural object reaching a planet’s surface from interplanetary space. Solid portion of a meteoroid that survives its fall to Earth, or some other body. Meteorites are classified as stony meteorites, iron meteorites, and stony-iron meteorites. These groups are further divided according to their mineralogy and continue to be found within the strewn field, located about 6 miles east of Holbrook at the southern end of SunOur parent star. The structure of Sun's interior is the result of the hydrostatic equilibrium between gravity and the pressure of the gas. The interior consists of three shells: the core, radiative region, and convective region. Image source: http://eclipse99.nasa.gov/pages/SunActiv.html. The core is the hot, dense central region in which the Valley Rd. off of I–40. It encompasses an area about 1/2 mile to the north and south of the Sante Fe RR tracks covering an area about 1 mile west and 2 miles east along the tracks from Sun Valley Rd; i.e., an ellipse with dimensions of ~ 1.5 × 3.5 miles (Dave Andrews—Holbrook hunter). An oxygenElement that makes up 20.95 vol. % of the Earth's atmosphere at ground level, 89 wt. % of seawater and 46.6 wt. % (94 vol. %) of Earth's crust. It appears to be the third most abundant element in the universe (after H and He), but has an abundance only isotopic study comparing the earliest recovered specimens to those recovered most recently has demonstrated that the heavier isotopes have increased measurably over the past 100 years (Pillinger et al., 2013). In a study of Holbrook conducted by Rubin (1990), it was determined that the mean olivineGroup of silicate minerals, (Mg,Fe)2SiO4, with the compositional endpoints of forsterite (Mg2SiO4) and fayalite (Fe2SiO4). Olivine is commonly found in all chondrites within both the matrix and chondrules, achondrites including most primitive achondrites and some evolved achondrites, in pallasites as large yellow-green crystals (brown when terrestrialized), in the silicate portion Fa content (Fa25.6) is at the high range for equilibrated L chondritesChondrites are the most common meteorites accounting for ~84% of falls. Chondrites are comprised mostly of Fe- and Mg-bearing silicate minerals (found in both chondrules and fine grained matrix), reduced Fe/Ni metal (found in various states like large blebs, small grains and/or even chondrule rims), and various refractory inclusions (such (Fa 23.0–25.8). In addition, the Co abundance in kamaciteMore common than taenite, both taenite and kamacite are Ni-Fe alloys found in iron meteorites. Kamacite, α-(Fe,Ni), contains 4-7.5 wt% Ni, and forms large body-centered cubic crystals that appear like broad bands or beam-like structures on the etched surface of a meteorite; its name is derived from the Greek word grains (10.4 mg/g) was found to lie between the values for both equilibrated L and LL chondrites (7.0–9.5 mg/g and 14.2–370 mg/g, respectively). Moreover, Clayton et al. (1991) determined that the O-isotopic composition of Holbrook (Δ17O = 1.25–1.32‰) lies at and beyond the upper range of equilibrated L chondrites (Δ17O = 0.80–1.25‰), but within the range of equilibrated LL chondrites (Δ17O = 1.02–1.44‰). Therefore, Holbrook has been included within the transitional L/LL group. It was demonstrated by Szurgot (2016) that the mean atomic weightMass of a neutral atom of a nuclide - also called "atomic weight." The atomic weight of an element is the weighted average of each isotope. (Amean) of meteorites can be used to resolve the OC groups, including the intermediate groups L/LL and H/L. Amean values can also be predicted through various equations based on other parameters such as atomic Fe/Si ratio, grain densityMass of an object divided by its volume. Density is a characteristic property of a substance (rock vs. ice, e.g.). Some substances (like gases) are easily compressible and have different densities depending on how much pressure is exerted upon them. The Sun is composed of compressible gases and is much, and magnetic susceptibility, and these Amean values all consistently resolve these groups into the ordered sequence LL < L/LL < L < H/L < H. Furthermore, it was demonstrated that Amean values are lower for unequilibrated type 3 samples than for equilibrated samples within each OC group due to the presence of water; Amean values for petrologic types 4–6 are indistinguishable within each group.

Diagram credit: M. Szurgot, 47th LPSC, #2180 (2016)
Amean based on chemical composition (Eq. 1), Fe/Si atomic ratio (Eq. 2), and grain density (Eq. 3) From rare gas studies, it is thought that the parent bodyThe body from which a meteorite or meteoroid was derived prior to its ejection. Some parent bodies were destroyed early in the formation of our Solar System, while others like the asteroid 4-Vesta and Mars are still observable today. of Holbrook underwent a catastrophic collision 340 (±50) m.y. ago. The largest Holbrook individual that was recovered, weighing about 14.5 pounds, has resided at the American Museum of Natural History in New York since Warren Foote obtained it soon after the fallMeteorite seen to fall. Such meteorites are usually collected soon after falling and are not affected by terrestrial weathering (Weathering = 0). Beginning in 2014 (date needs confirmation), the NomComm adopted the use of the terms "probable fall" and "confirmed fall" to provide better insight into the meteorite's history. If. It was only recently returned to Arizona, and can be viewed in the Bateman Physical Sciences Center at Arizona State University in Tempe. The photo shown above is a 1.0 g, fusion-crusted, pea-sized specimen labeled as AMNH collection #3241, along with an interior cut fragment weighing 1.2 g. Pictured below is an artist’s impression of a ‘deadly hail of stones’ at the Holbrook fall in Arizona, as illustrated by Walter Molino in an October 6, 1946 edition of the Italian newspaper ‘La Domenica Del Corriere’. 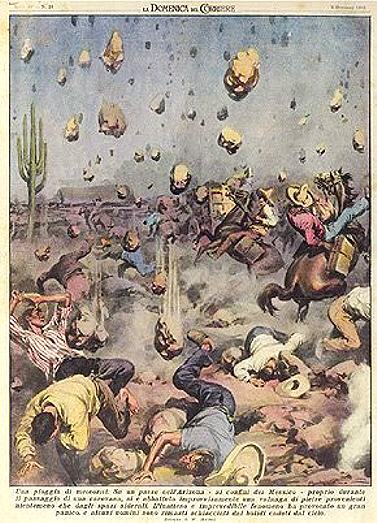