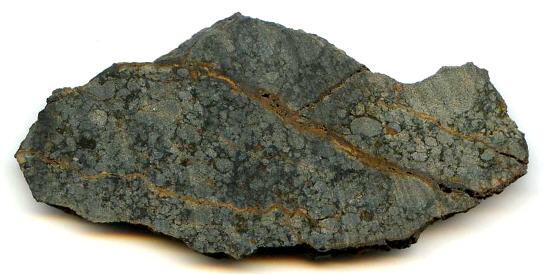 Found August 1975
40° 27.4′ N., 102° 34.7′ W. A 15.53 kg stone was found by Mr. Pat Kain 21 km SSE of Haxtun, Colorado while he was plowing a wheat field (Rubin and Krot, 1993). The three mineralogical classification parameters yield three different group assignments for Haxtun: olivineGroup of silicate minerals, (Mg,Fe)2SiO4, with the compositional endpoints of forsterite (Mg2SiO4) and fayalite (Fe2SiO4). Olivine is commonly found in all chondrites within both the matrix and chondrules, achondrites including most primitive achondrites and some evolved achondrites, in pallasites as large yellow-green crystals (brown when terrestrialized), in the silicate portion (Fa21.6) suggests H/L; low-Ca pyroxeneA class of silicate (SiO3) minerals that form a solid solution between iron and magnesium and can contain up to 50% calcium. Pyroxenes are important rock forming minerals and critical to understanding igneous processes. For more detailed information, please read the Pyroxene Group article found in the Meteoritics & Classification category. (Fs17.8) suggests H; and cobalt in kamaciteMore common than taenite, both taenite and kamacite are Ni-Fe alloys found in iron meteorites. Kamacite, α-(Fe,Ni), contains 4-7.5 wt% Ni, and forms large body-centered cubic crystals that appear like broad bands or beam-like structures on the etched surface of a meteorite; its name is derived from the Greek word (7.5 mg/g) suggests L. Haxtun shares this intermediate, equilibrated H/L4 classification with Yamato 74645.

An upper limit to the average chondruleRoughly spherical aggregate of coarse crystals formed from the rapid cooling and solidification of a melt at  ~1400 ° C. Large numbers of chondrules are found in all chondrites except for the CI group of carbonaceous chondrites. Chondrules are typically 0.5-2 mm in diameter and are usually composed of olivine size in Haxtun was determined to be 0.85 mm, which is slightly larger than the average for H chondritesChondrites are the most common meteorites accounting for ~84% of falls. Chondrites are comprised mostly of Fe- and Mg-bearing silicate minerals (found in both chondrules and fine grained matrix), reduced Fe/Ni metal (found in various states like large blebs, small grains and/or even chondrule rims), and various refractory inclusions (such of 0.7 mm. Haxtun is highly weathered and belongs to shock stageA petrographic assessment, using features observed in minerals grains, of the degree to which a meteorite has undergone shock metamorphism. The highest stage observed in 25% of the indicator grains is used to determine the stage. Also called "shock level".               S4. Very few meteorites have been assigned to this intermediate group, which now includes Famenin [3.8–3.9], Tieschitz [3.6], Bremervörde [3.9], Haxtun [4], Y-74645 [4], and Yamato 8424. Initial studies indicate that Dhofar 008 might also belong to this group. The specimen of Haxtun shown above is a 4.9 g slice, and the bottom image is an excellent petrographic thin sectionThin slice or rock, usually 30 µm thick. Thin sections are used to study rocks with a petrographic microscope. micrograph of Haxtun, shown courtesy of Peter Marmet.