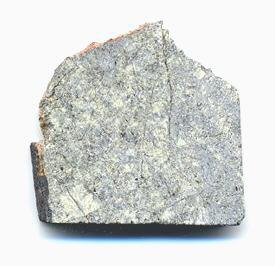 purchased 2003
no coordinates recorded A fresh (W1), mostly complete stone, weighing 320 g, was purchased in Morocco by an American dealer. A portion of the meteoriteWork in progress. A solid natural object reaching a planet’s surface from interplanetary space. Solid portion of a meteoroid that survives its fall to Earth, or some other body. Meteorites are classified as stony meteorites, iron meteorites, and stony-iron meteorites. These groups are further divided according to their mineralogy and was sent to Northern Arizona University for classification (T. Bunch and J. Wittke), and it was determined that NWA 2092 is a transitional type LL6/7. Features of this chondriteChondrites are the most common meteorites accounting for ~84% of falls. Chondrites are comprised mostly of Fe- and Mg-bearing silicate minerals (found in both chondrules and fine grained matrix), reduced Fe/Ni metal (found in various states like large blebs, small grains and/or even chondrule rims), and various refractory inclusions (such, such as brecciationThe formation of a breccia through a process by which rock fragments of of various types are recemented or fused together., thermal annealing along fractures and clastA mineral or rock fragment embedded in another rock. borders, and a variable grain size in the matrixFine grained primary and silicate-rich material in chondrites that surrounds chondrules, refractory inclusions (like CAIs), breccia clasts and other constituents. are consistent with a shock metamorphismMetamorphism produced by hypervelocity impact between objects of substantial size moving at cosmic velocity (at least several kilometers per second). Kinetic energy is converted into seismic and heat energy almost instantaneously, yielding pressures and temperatures far in excess those in normal terrestrial metamorphism. On planetary bodies with no atmosphere, smaller/recrystallization event; the shock stageA petrographic assessment, using features observed in minerals grains, of the degree to which a meteorite has undergone shock metamorphism. The highest stage observed in 25% of the indicator grains is used to determine the stage. Also called "shock level".               is S3.

Northwest Africa 2092 is an ordinary chondriteWork in Progress Ordinary chondrites (OCs) are the largest meteorite clan, comprising approximately 87% of the global collection and 78% of all falls (Meteoritical Society database 2018)1. Meteorites & the Early Solar System: page 581 section 6.1 OC of type 5 or 6 with an apparent shock stage of S1, which exhibits features that do not permit an unambiguous resolution of petrologic typeMeasure of the degree of aqueous alteration (Types 1 and 2) and thermal metamorphism (Types 3-6) experienced by a chondritic meteorite. Type 3 chondrites are further subdivided into 3.0 through 3.9 subtypes., but instead, exhibits features intermediate between types 6 and 7. Type 7 ordinary chondritesChondrites are the most common meteorites accounting for ~84% of falls. Chondrites are comprised mostly of Fe- and Mg-bearing silicate minerals (found in both chondrules and fine grained matrix), reduced Fe/Ni metal (found in various states like large blebs, small grains and/or even chondrule rims), and various refractory inclusions (such were originally defined by Dodd et al. (1975) according to specific petrographic characteristics. They listed three metamorphicRocks that have recrystallized in a solid state due to changes in temperature, pressure, and chemical environment. criteria to distinguish between petrologic types 6 and 7, though a definite hiatus is not readily resolved:

The low-Ca pyroxeneA class of silicate (SiO3) minerals that form a solid solution between iron and magnesium and can contain up to 50% calcium. Pyroxenes are important rock forming minerals and critical to understanding igneous processes. For more detailed information, please read the Pyroxene Group article found in the Meteoritics & Classification category. in NWA 2092 has an average CaO content of 1.0 wt%, which is consistent with a borderline, transitional 6/7 type (strictly defined, perhaps a Dodd type 6). Furthermore, the size of plagioclaseAlso referred to as the plagioclase feldspar series. Plagioclase is a common rock-forming series of feldspar minerals containing a continuous solid solution of calcium and sodium: (Na1-x,Cax)(Alx+1,Si1-x)Si2O8 where x = 0 to 1. The Ca-rich end-member is called anorthite (pure anorthite has formula: CaAl2Si2O8) and the Na-rich end-member is albite grains was used by Dodd et al. to delimit a boundary between types 6 and 7: the coarsening of grains to at least 0.1 mm defines a type 7. However, Bunch and Wittke suggest that the relative size of all of the silicates would provide a better gauge—silicates attain an equigranular texture only under the highest metamorphism. They have also discovered that simple twinning of plagioclase occurs only in type 7, and suggest that this could be utilized as an additional parameter. Furthermore, it was revealed by Bunch and Wittke that modal metalElement that readily forms cations and has metallic bonds; sometimes said to be similar to a cation in a cloud of electrons. The metals are one of the three groups of elements as distinguished by their ionization and bonding properties, along with the metalloids and nonmetals. A diagonal line drawn contents decrease significantly during late metamorphic stages; i.e., low-Ni metal, as well as pyroxenes, are consumed to produce olivineGroup of silicate minerals, (Mg,Fe)2SiO4, with the compositional endpoints of forsterite (Mg2SiO4) and fayalite (Fe2SiO4). Olivine is commonly found in all chondrites within both the matrix and chondrules, achondrites including most primitive achondrites and some evolved achondrites, in pallasites as large yellow-green crystals (brown when terrestrialized), in the silicate portion, resulting in only small amounts of Ni-rich metal and lower amounts of orthopyroxeneOrthorhombic, low-Ca pyroxene common in chondrites. Its compositional range runs from all Mg-rich enstatite, MgSiO3 to Fe-rich ferrosilite, FeSiO3. These end-members form an almost complete solid solution where Mg2+ substitutes for Fe2+ up to about 90 mol. % and Ca substitutes no more than ~5 mol. % (higher Ca2+ contents occur and clinopyroxene compared to those amounts in lower metamorphic grades. Based on all of the data, it was concluded that NWA 2092 best fits a transitional 6/7 classification. The photo above shows a 2.38 g partial slice of NWA 2092. The photo below is a thin sectionThin slice or rock, usually 30 µm thick. Thin sections are used to study rocks with a petrographic microscope. in crossed polarized light which shows the variable grain size of the silicates. 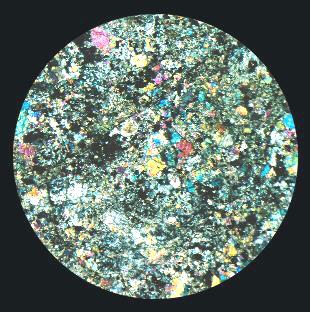