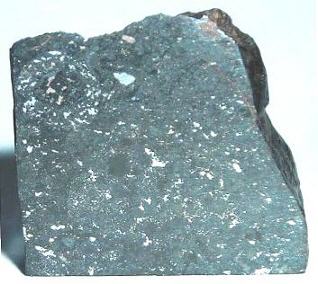 Purchased before 2006
no coordinates recorded Two pieces of a single stone weighing together 436.4 g were found in Northwest Africa and sold in Erfoud, Morocco to meteoriteWork in progress. A solid natural object reaching a planet’s surface from interplanetary space. Solid portion of a meteoroid that survives its fall to Earth, or some other body. Meteorites are classified as stony meteorites, iron meteorites, and stony-iron meteorites. These groups are further divided according to their mineralogy and collector C. Anger of Austromet. A sample was submitted for analysis and classification to the Museum für Naturkunde (A. Greshake and M. Kurz), and it was initially determined that NWA 4150 is a unique melt lithology belonging to the transitional H/L-chondrite group. This initial classification has been revised based on continued study (Wittmann et al., 2011).