L Impact-Melt BrecciaWork in Progress ... A rock that is a mechanical mixture of different minerals and/or rock fragments (clasts). A breccia may also be distinguished by the origin of its clasts: (monomict breccia: monogenetic or monolithologic, and polymict breccia: polygenetic or polylithologic). The proportions of these fragments within the unbrecciated material
(L5 in MetBull 75)

Found 1980/81, recognized 1993
32° 8.9′ N., 111° 6.7′ W. In Tucson, Arizona, a man named William Goldups walked his dog along the same path near his home on a daily basis. One day he discovered a rather large, dark stone that had not previously been there. He brought it home and placed it on his mantleMain silicate-rich zone within a planet between the crust and metallic core. The mantle accounts for 82% of Earth's volume and is composed of silicate minerals rich in Mg. The temperature of the mantle can be as high as 3,700 °C. Heat generated in the core causes convection currents in where it remained until after his death in 1990. The rock was inherited by a friend, who took it to the University of Arizona’s MineralInorganic substance that is (1) naturally occurring (but does not have a biologic or man-made origin) and formed by physical (not biological) forces with a (2) defined chemical composition of limited variation, has a (3) distinctive set of of physical properties including being a solid, and has a (4) homogeneous Museum. An X-ray powder diffraction test determined that olivineGroup of silicate minerals, (Mg,Fe)2SiO4, with the compositional endpoints of forsterite (Mg2SiO4) and fayalite (Fe2SiO4). Olivine is commonly found in all chondrites within both the matrix and chondrules, achondrites including most primitive achondrites and some evolved achondrites, in pallasites as large yellow-green crystals (brown when terrestrialized), in the silicate portion was present. The meteoriteWork in progress. A solid natural object reaching a planet’s surface from interplanetary space. Solid portion of a meteoroid that survives its fall to Earth, or some other body. Meteorites are classified as stony meteorites, iron meteorites, and stony-iron meteorites. These groups are further divided according to their mineralogy and was then taken to the Lunar and Planetary Laboratory (D. Kring) where it was analyzed by electrom microprobe and reflectance spectrography, which conclusively determined that it was a meteorite. The name Cat Mountain corresponds to the southern-most peak of the Tucson Mountains, located about 2 miles NW from the site of the findMeteorite not seen to fall, but recovered at some later date. For example, many finds from Antarctica fell 10,000 to 700,000 years ago.. In 2011 two additional paired stones were recovered on Snyder Hill, a few hundred yards from the location of the main massLargest fragment of a meteorite, typically at the time of recovery. Meteorites are commonly cut, sliced or sometimes broken thus reducing the size of the main mass and the resulting largest specimen is called the "largest known mass".. These include a 107.2 g stone found in March by Mike Holden and classified as Cat Mountain 001 (Bunch and Wittke, NAU), and a 162 g stone found in August by Count Guido Deiro and classified as Cat Mountain 002 (Bunch and Wittke, NAU).

This is an unusual meteorite that has undergone numerous impact/heating events. This impact melt breccia contains chondrule-bearing clasts preserving shock veins from an early impact on its parent bodyThe body from which a meteorite or meteoroid was derived prior to its ejection. Some parent bodies were destroyed early in the formation of our Solar System, while others like the asteroid 4-Vesta and Mars are still observable today., perhaps 2.7 b.y. ago. Thereafter, another impact metamorphosed the chondrule-bearing clasts to type L5. Then, 880 m.y. ago, a major impact created a melt-breccia lens at the bottom of a craterBowl-like depression ("crater" means "cup" in Latin) on the surface of a planet, moon, or asteroid. Craters range in size from a few centimeters to over 1,000 km across, and are mostly caused by impact or by volcanic activity, though some are due to cryovolcanism. at least 1 km in diameter. The clasts were then surrounded by the swirls of an FeNi-metal melt-matrix and underwent cooling. A further impact 500 m.y. ago ejected this impact melt breccia from the surface, where it drifted in space until 20 m.y. ago. At this time, the CRE age began to accumulate, as a final collision reducedOxidation and reduction together are called redox (reduction and oxidation) and generally characterized by the transfer of electrons between chemical species, like molecules, atoms or ions, where one species undergoes oxidation, a loss of electrons,  while another species undergoes reduction, a gain of electrons. This transfer of electrons between reactants the object to a meter-sized object prior to its impact on Earth. At least six impact events are recorded in the complex history of this meteorite. The belief by Mr. Goldups that this was a fallMeteorite seen to fall. Such meteorites are usually collected soon after falling and are not affected by terrestrial weathering (Weathering = 0). Beginning in 2014 (date needs confirmation), the NomComm adopted the use of the terms "probable fall" and "confirmed fall" to provide better insight into the meteorite's history. If within 24 hours of his discovery was confirmed by reflectance spectra tests. The specimen shown above is a 4.1 g partial slice showing the boundary region between a shocked, chondrule-rich lithology and the FeNi-metal swirls of shock-melted matrixFine grained primary and silicate-rich material in chondrites that surrounds chondrules, refractory inclusions (like CAIs), breccia clasts and other constituents.. The photo below was taken at an angle which highlights the metalElement that readily forms cations and has metallic bonds; sometimes said to be similar to a cation in a cloud of electrons. The metals are one of the three groups of elements as distinguished by their ionization and bonding properties, along with the metalloids and nonmetals. A diagonal line drawn flakes. 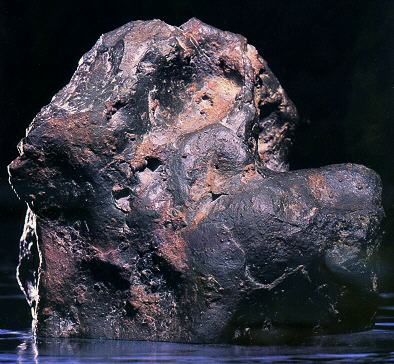