H-melt rock
(H chondriteOrdinary chondrites with a high content of free Ni-Fe metal (15-19 vol. %) and attracted easily to a magnet. Their main minerals are olivine (Fa16-20) and the orthopyroxene bronzite (Fs14.5-18.5), earning them their older name of bronzite chondrites. Chondrules average ~0.3 mm in diameter. Comparison of the reflectance spectra of in MetBull 88) 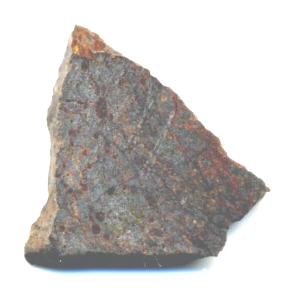 Found 2001
no coordinates recorded Five fusion-crusted stones weighing together 80.1 g were found in the desert of northwest Africa. Classification was completed at Northern Arizona University (T. Bunch and J. Wittke) and NWA 2058 was determined to be an H chondriteChondrites are the most common meteorites accounting for ~84% of falls. Chondrites are comprised mostly of Fe- and Mg-bearing silicate minerals (found in both chondrules and fine grained matrix), reduced Fe/Ni metal (found in various states like large blebs, small grains and/or even chondrule rims), and various refractory inclusions (such melt rock which is composed of over 90% melt phase and has been severely shocked to at least stage S6. The meteoriteWork in progress. A solid natural object reaching a planet’s surface from interplanetary space. Solid portion of a meteoroid that survives its fall to Earth, or some other body. Meteorites are classified as stony meteorites, iron meteorites, and stony-iron meteorites. These groups are further divided according to their mineralogy and is terrestrially weathered to a grade of W2/3.

This meteorite has experienced extreme metamorphicRocks that have recrystallized in a solid state due to changes in temperature, pressure, and chemical environment. forces, probably during a highly energetic cosmic impact. This energy has caused crushing and ductile deformation to produce milonite with its characteristic foliation (planar alignment) and lineation (much longer in one dimension than in the other two), as well as shear deformation, melting, and flowing to produce pseudotachyliteRock formed by frictional melting of rocks during faulting and impact cratering as a result of high rates of deformation and nearly total transformation of kinetic energy to heat. After deformation ceases, rapid quenching of the frictional melt leads to the formation of glass. The term was first applied to. Pseudotachylite is commonly found in faults associated with impact craters such as the Sudbury impact craterCrater formed by high-speed impact of a meteoroid, asteroid, or comet on a solid surface. Craters are a common feature on most moons (an exception is Io), asteroids, and rocky planets, and range in size from a few cm to over 1,000 km across. There is a general morphological progression in Canada and the Vredefort impact structure in South Africa. Frictional melting of rock caused by slippage of the craterBowl-like depression ("crater" means "cup" in Latin) on the surface of a planet, moon, or asteroid. Craters range in size from a few centimeters to over 1,000 km across, and are mostly caused by impact or by volcanic activity, though some are due to cryovolcanism. walls, followed by rapid cooling, produced the glassy textures in terrestrial pseudotachylite, and perhaps by a similar process in NWA 2058. The matrixFine grained primary and silicate-rich material in chondrites that surrounds chondrules, refractory inclusions (like CAIs), breccia clasts and other constituents. of NWA 2058 consists of fine-grained, recrystallized olivineGroup of silicate minerals, (Mg,Fe)2SiO4, with the compositional endpoints of forsterite (Mg2SiO4) and fayalite (Fe2SiO4). Olivine is commonly found in all chondrites within both the matrix and chondrules, achondrites including most primitive achondrites and some evolved achondrites, in pallasites as large yellow-green crystals (brown when terrestrialized), in the silicate portion containing relict grains which exhibit strain-induced undulatory extinctionIn astronomy, the dimming of starlight as it passes through the interstellar medium. Dust scatters some of the light, causing the total intensity of the light to diminish. It is important to take this effect into account when measuring the apparent brightness of stars. The dark bands running across portions. Unmelted grains or clasts of the local rock are incorporated within the glassy matrix. The meteorite contains FeNi–FeS droplets that have been melted and quenched. With the possiblity of large uncertainies not accounted for, an 40Ar–39Ar analysis for NWA 2058 resulted in a degassing age of 509 (±105) m.y. (Swindle et al., 2006; Kring and Swindle, 2008; Swindle et al., 2009). This gas retention age is the same within error as that measured for L chondritesChondrites are the most common meteorites accounting for ~84% of falls. Chondrites are comprised mostly of Fe- and Mg-bearing silicate minerals (found in both chondrules and fine grained matrix), reduced Fe/Ni metal (found in various states like large blebs, small grains and/or even chondrule rims), and various refractory inclusions (such, which is thought to have suffered impact disruption 470 m.y. ago; the two collisional events might be related. Alternatively, the widespread CRE age that is found for H chondrites of 5–10 m.y. could reflect resetting during a more recent disruption event. The specimen of NWA 2058 shown above is a 0.19 g part slice.