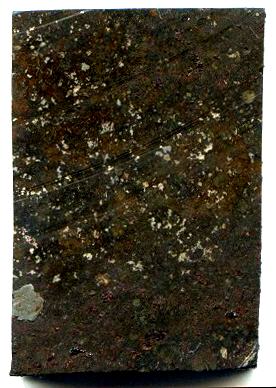 Found October 30, 1983
30° 18′ 42′ N., 86° 10′ W. A large, unbroken, 11.3 kg stone was found about 200 meters from the high tide line and 1 meter below the surface by two treasure hunters, Mr. Phillip Gibson and Dr. John Green, while using metalElement that readily forms cations and has metallic bonds; sometimes said to be similar to a cation in a cloud of electrons. The metals are one of the three groups of elements as distinguished by their ionization and bonding properties, along with the metalloids and nonmetals. A diagonal line drawn detectors. They were searching for Spanish armor in an ancient Indian refuse heap near Grayton Beach, Florida when they found the 23 × 18 × 17.5 cm dark-brown stone. The stone is without a distinct fusion crustMelted exterior of a meteorite that forms when it passes through Earth’s atmosphere. Friction with the air will raise a meteorite’s surface temperature upwards of  4800 K (8180 °F) and will melt (ablate) the surface minerals and flow backwards over the surface as shown in the Lafayette meteorite photograph below. due to the presence of a silicateThe most abundant group of minerals in Earth's crust, the structure of silicates are dominated by the silica tetrahedron, SiO44-, with metal ions occurring between tetrahedra). The mesodesmic bonds of the silicon tetrahedron allow extensive polymerization and silicates are classified according to the amount of linking that occurs between the encrustation formed during its extended residence in wet sand.

Suspecting the stone was not from the area, they contacted the Earth Sciences Department at Pensacola Junior College where professors Wooten, Palma, and Exum concluded that it might be a meteoriteWork in progress. A solid natural object reaching a planet’s surface from interplanetary space. Solid portion of a meteoroid that survives its fall to Earth, or some other body. Meteorites are classified as stony meteorites, iron meteorites, and stony-iron meteorites. These groups are further divided according to their mineralogy and. They sent a sample to Harold Povenmire of the Florida FireballA fireball is another term for a very bright meteor, generally brighter than magnitude -4, which is about the same magnitude of the planet Venus as seen in the morning or evening sky. A bolide is a special type of fireball which explodes in a bright terminal flash at its end, often with visible fragmentation. Patrol who initially thought it was a sedimentary ferriginous sandstone nodule commonly found along the coastal beaches of the southeast. However, after learning of the findMeteorite not seen to fall, but recovered at some later date. For example, many finds from Antarctica fell 10,000 to 700,000 years ago. circumstances and running some tests, including comparisons to known chondritesChondrites are the most common meteorites accounting for ~84% of falls. Chondrites are comprised mostly of Fe- and Mg-bearing silicate minerals (found in both chondrules and fine grained matrix), reduced Fe/Ni metal (found in various states like large blebs, small grains and/or even chondrule rims), and various refractory inclusions (such, he concluded that it was a meteorite. A small slice was subsequently sent to Glenn Huss of the American Meteorite Laboratory, who verified its meteoritical origin, and then to Dr. Andrew Graham of the British Museum of Natural History for classification. The photo above shows an 11.2 g specimen cut from the interior of the Grayton mass. The photos below show the original mass as found.

Photo courtesy MeteoriticsScience involved in the study of meteorites and related materials. Meteoritics are closely connected to cosmochemistry, mineralogy and geochemistry. A scientist that specializes in meteoritics is called a meteoriticist., vol. 19 (1984) 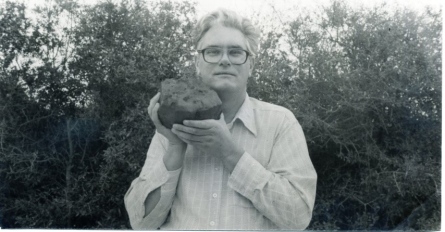 Due in part to the intense temperature and moisture conditions in the state of Florida, only four meteorites have been found there to date, in addition to two recovered falls. Besides Grayton Beach, approximately 1 kg of L4 fragments were brought up in a net offshore of Lake Okechobee, a 502 g H4 stone was plowed up in Eustis, and a 41.8 kg H5 stone was found in Bonita Springs. In 2004, November 8 at 6:15 P.M., Orlando resident Donna Shuford heard a meteorite bounce off her car and hit the side of her house. Fragments composing an ~180 g eucriteMost common type of achondrite meteorite and a member of the HED group. Eucrites are basalts composed primarily of pigeonite and anorthite (An60-98). Eucrites have been placed into three subgroups based on mineralogical and chemical differences. • Non-cumulate eucrites represent the upper crust that solidified on a magma ocean after were recovered. In 2016, January 24 at 10:27 A.M., numerous eyewitnesses observed a bright fireball over northern Florida near the Osceola National Forest. Utilizing radar images from several stations, a group of hunters successfully plotted the fallMeteorite seen to fall. Such meteorites are usually collected soon after falling and are not affected by terrestrial weathering (Weathering = 0). Beginning in 2014 (date needs confirmation), the NomComm adopted the use of the terms "probable fall" and "confirmed fall" to provide better insight into the meteorite's history. If site and recovered 8 stones over many weeks having a combined weight of 1,099.6 g. The L6 chondriteChondrites are the most common meteorites accounting for ~84% of falls. Chondrites are comprised mostly of Fe- and Mg-bearing silicate minerals (found in both chondrules and fine grained matrix), reduced Fe/Ni metal (found in various states like large blebs, small grains and/or even chondrule rims), and various refractory inclusions (such fell within a forested wetlands region delimiting a strewn field of approximately 5 miles × 1 mile.