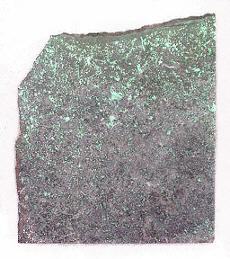 In contrast to the EL6 meteorites, all very weakly shocked to S2, NWA 1222 is more strongly shocked to stage S3 (corresponding to a peak pressure of 10–20 GPa). The mineralInorganic substance that is (1) naturally occurring (but does not have a biologic or man-made origin) and formed by physical (not biological) forces with a (2) defined chemical composition of limited variation, has a (3) distinctive set of of physical properties including being a solid, and has a (4) homogeneous sinoite (silicon oxynitride) has been found to occur in many EL chondrites, associated with crystallizationPhysical or chemical process or action that results in the formation of regularly-shaped, -sized, and -patterned solid forms known as crystals. of an impact melt. Presumably, these initial intense shock effects were erased during an annealing phase, but sometime later, a minor shock event left its characteristic signature in the rock. The EL5 subgroup presently comprises only a few confirmed members, including Tanezrouft 031 (28 g), TIL 91714 (163.9 g), and NWA 1222 (2,800 g). Another E chondrite of petrologic typeMeasure of the degree of aqueous alteration (Types 1 and 2) and thermal metamorphism (Types 3-6) experienced by a chondritic meteorite. Type 3 chondrites are further subdivided into 3.0 through 3.9 subtypes. 5, the ambiguously grouped RKPA80259 (20.2 g), was initially included in the EL group based on its low siderophile elementLiterally, "iron-loving" element that tends to be concentrated in Fe-Ni metal rather than in silicate; these are Fe, Co, Ni, Mo, Re, Au, and PGE. These elements are relatively common in undifferentiated meteorites, and, in differentiated asteroids and planets, are found in the metal-rich cores and, consequently, extremely rare on content. However, further studies determined that it has certain refractory elementSubstance composed of atoms, each of which has the same atomic number (Z) and chemical properties. The chemical properties of an element are determined by the arrangement of the electrons in the various shells (specified by their quantum number) that surround the nucleus. In a neutral atom, the number of ratios more consistent with the EH group, and that its low siderophile content was probably the result of terrestrial weathering. Additional support for inclusionFragment of foreign (xeno-) material enclosed within the primary matrix of a rock or meteorite. into the EH group comes from the presence of niningerite [(Mg,Fe)S] or keilite [(Fe,Mg)S] rather than alabanditeMagnesium sulfide found in aubrites and EL chondrites. Its formula is MnS. [(Mn,Fe)S], a Si content in kamaciteMore common than taenite, both taenite and kamacite are Ni-Fe alloys found in iron meteorites. Kamacite, α-(Fe,Ni), contains 4-7.5 wt% Ni, and forms large body-centered cubic crystals that appear like broad bands or beam-like structures on the etched surface of a meteorite; its name is derived from the Greek word of 2.1 wt% (EH: 1.9–3.8 wt%; EL: 0.3–2.1 wt%), and a small chondruleRoughly spherical aggregate of coarse crystals formed from the rapid cooling and solidification of a melt at  ~1400 ° C. Large numbers of chondrules are found in all chondrites except for the CI group of carbonaceous chondrites. Chondrules are typically 0.5-2 mm in diameter and are usually composed of olivine size. Paradoxically, RKP A80259 displays the characteristic cathodoluminescenceEmission of visible light in response to electron bombardment. of enstatite found in the EL group. The specimen of NWA 1222 pictured above is a 5.35 g polished partial slice, while the photo below shows the cut face of the main massLargest fragment of a meteorite, typically at the time of recovery. Meteorites are commonly cut, sliced or sometimes broken thus reducing the size of the main mass and the resulting largest specimen is called the "largest known mass".. Although not obvious from the angle of the lighting in these pictures, FeNi-metal is pervasive throughout the rock. 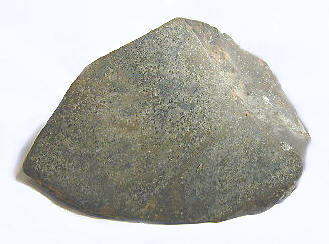