EL Melt Rock
(EL7 in MetBull 71; Primitive Enstatite AchondriteUsed in past as synonym for Aubrites. Present definition from the Meteoritical Bulletin states that this rare class is an "enstatite-rich  achondrite  that has not yet been classified into a group". [Pilski et al., 2011])
(ELa7 in Weyrauch et al., 2018) 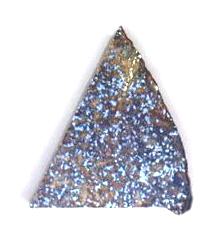 The mineralogy of Ilafegh 009 is similar to that of EL chondrites; in wt%, the modal mineralogy is as follows (McCoy et al., 1992, 1995): orthoenstatite (52.4), twinned enstatite (1.9–3.2), plagioclaseAlso referred to as the plagioclase feldspar series. Plagioclase is a common rock-forming series of feldspar minerals containing a continuous solid solution of calcium and sodium: (Na1-x,Cax)(Alx+1,Si1-x)Si2O8 where x = 0 to 1. The Ca-rich end-member is called anorthite (pure anorthite has formula: CaAl2Si2O8) and the Na-rich end-member is albite (7.1), FeNi-metal + schreibersiteNi-Fe phosphide mineral, (Fe,Ni)3P, yellowish in color and predominantly found in iron and stony-iron meteorites. Schreibersite can also be found in a variety of other meteorites including some acapulcoites, aubrites, enstatite chondrites and achondrites, lunars, ureilites, winonaites and a smattering of other meteorite types like CM, CO and CB. Schreibersite (27.2), Cr–Ti-troilite (8.1) in association with daubreélite and ferroan alabanditeMagnesium sulfide found in aubrites and EL chondrites. Its formula is MnS., CaS (oldhamiteMn-Ca sulfide, (Mn,Ca)S, is a pale to dark brown accessory mineral found in minor amounts in highly reduced meteorites such as many enstatite chondrites, and some aubrites and enstatite achondrites. Oldhamite in enstatite chondrites likely formed by solar nebular gas condensation. CaS Oldhamite was also found in the most fresh), and trace TiN (osbornite). The plagioclase grains contain tiny fluid or gas inclusions. The FeNi-metal consists only of kamaciteMore common than taenite, both taenite and kamacite are Ni-Fe alloys found in iron meteorites. Kamacite, α-(Fe,Ni), contains 4-7.5 wt% Ni, and forms large body-centered cubic crystals that appear like broad bands or beam-like structures on the etched surface of a meteorite; its name is derived from the Greek word that contains ~6 wt% Ni and up to 1.3 wt% Si. Nanoscale exsolutionSegregation, during cooling, of a homogeneous solid solution into two or more different solids. precipitates enriched in Ni, P, and Si are ubiquitous throughout the kamacite host phase and might characterize a combination of schreibersite and perryite. Weyrauch et al. (2018) analyzed the mineralInorganic substance that is (1) naturally occurring (but does not have a biologic or man-made origin) and formed by physical (not biological) forces with a (2) defined chemical composition of limited variation, has a (3) distinctive set of of physical properties including being a solid, and has a (4) homogeneous and chemical data from 80 enstatite chondrites representing both EH and EL groups and spanning the full range of petrologic types for each group. They found that a bimodality exists in each of these groups with respect to both the Cr content in troiliteBrass colored non-magnetic mineral of iron sulfide, FeS, found in a variety of meteorites. and the Fe concentration in niningerite and alabandite (endmembers of the [Mn,Mg,Fe] solid solutionCompositional variation resulting from the substitution of one ion or ionic compound for another ion or ionic compound in an isostructural material. This results in a mineral structure with specific atomic sites occupied by two or more ions or ionic groups in variable proportions. Solid solutions can be complete (with series present in EH and EL groups, respectively). In addition, both the presence or absence of daubréelite and the content of Ni in kamacite were demonstrated to be consistent factors for the resolution of four distinct E chondrite groups: EHa, EHb, ELa, and ELb (see table below).

A few other E chondrites with intermediate mineralogy have also been identified, including LAP 031220 (EH4), QUE 94204 (EH7), Y-793225 (E-an), LEW 87223 (E-an), and PCA 91020 (possibly related to LEW 87223). Studies have determined that these meteorites were not derived from the EH or EL source through any metamorphicRocks that have recrystallized in a solid state due to changes in temperature, pressure, and chemical environment. processes, and some or all of them could represent separate E chondrite asteroids. The revised E chondrite classification scheme of Weyrauch et al. (2018) including selected examples from their 80-sample study can be found here. It was determined that Ilafegh 009 is a member of the ELa subgroup. 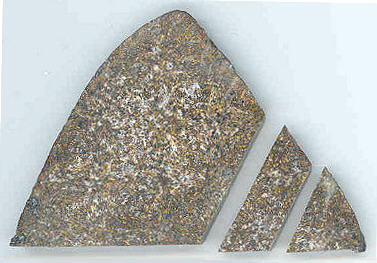