A few other E chondrites with intermediate mineralogy have also been identified, including LAP 031220 (EH4), QUE 94204 (EH7), Y-793225 (E-an), LEW 87223 (E-an), and PCA 91020 (possibly related to LEW 87223). Studies have determined that these meteorites were not derived from the EH or EL source through any metamorphicRocks that have recrystallized in a solid state due to changes in temperature, pressure, and chemical environment. processes, and some or all of them could represent separate E chondrite asteroids. The revised E chondrite classification scheme of Weyrauch et al. (2018) including selected examples from their 80-sample study can be found here. It was determined that MS-MU-002 is a member of the ELb subgroup.

Petrographic and isotopic evidence indicate that the EL parent body accreted hot silicateThe most abundant group of minerals in Earth's crust, the structure of silicates are dominated by the silica tetrahedron, SiO44-, with metal ions occurring between tetrahedra). The mesodesmic bonds of the silicon tetrahedron allow extensive polymerization and silicates are classified according to the amount of linking that occurs between the and metalElement that readily forms cations and has metallic bonds; sometimes said to be similar to a cation in a cloud of electrons. The metals are one of the three groups of elements as distinguished by their ionization and bonding properties, along with the metalloids and nonmetals. A diagonal line drawn components that were formed through repeated nebular condensation processes rather than by impact-heating events on a parent body (Weisberg et al., 2013). Observations consistent with a nebular condensation origin include the absence of shock-induced features, the lack of high-pressure polymorphs, the presence of metal–sinoite–oldhamite–graphiteOpaque form of carbon (C) found in some iron and ordinary chondrites and in ureilite meteorites. Each C atom is bonded to three others in a plane composed of fused hexagonal rings, just like those in aromatic hydrocarbons. The two known forms of graphite, α (hexagonal) and β (rhombohedral), have assemblages composed of crystalline sinoite and poorly graphitized carbonElement commonly found in meteorites, it occurs in several structural forms (polymorphs). All polymorphs are shown to the left with * indicating that it been found in meteorites and impact structures: a. diamond*; b. graphite*; c. lonsdalite*; d. buckminsterfullerene* (C60); e. C540; f. C70; g. amorphous carbon; h. carbon nanotube*., and the pristine texture of discrete chondrules and metal nodules, while the isotopic inventory is inconsistent with a large-scale impact-heating event. A high abundance of metal in the final agglomerationProcess of collecting in a jumbled cluster. In relation to meteorites, agglomeration refers to the early accretion of chondrules, refractory inclusions and silicate matrix material to form chondritic clusters. is also expected with the presumed nebular condensation sequence. Exclusive of the primary ureilite components, there was a broad diversity of lithologic types present in 2008 TC3, constituting <30% of all material recovered. However, with the vast bulk of 2008 TC3 thought to have been lost as fine dust (≥99.9% of the estimated 42–83 ton pre-atmospheric mass), the bulk asteroid was likely composed of fine-grained, highly porous, and weakly consolidated ureilitic matrix material, consistent with the reflectance spectra obtained for the asteroid (Goodrich et al., 2015). Examples of some of the diverse samples that have been recovered are listed below (Bischoff et al., 2010, 2015, 2016, 2018; Horstmann and Bischoff, 2010, 2014; Hoffmann et al., 2016):

Special thanks to Siegfried Haberer and Stephan Decker for providing specimens of this special meteorite and many of its xenolithic inclusions to the scientific and collector communities. The photo of MS-MU-002 shown above is a 0.350 g full slice. The photo below shows the 3.00 g main massLargest fragment of a meteorite, typically at the time of recovery. Meteorites are commonly cut, sliced or sometimes broken thus reducing the size of the main mass and the resulting largest specimen is called the "largest known mass".. 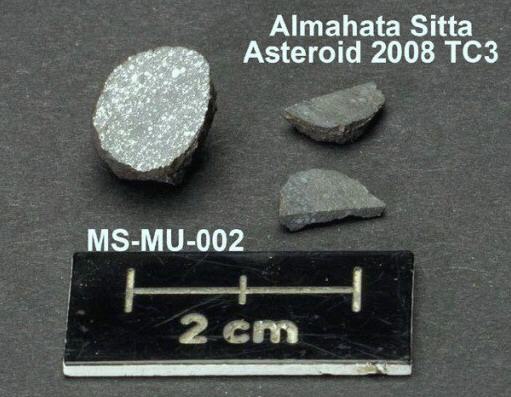