click on image for a magnified view Diagram credit: Jacquet et al., MAPS, vol. 51, #5, p. 862 (2016)
‘Northwest Africa 5958: A weakly altered CM-related ungrouped chondrite, not a CI3’ (http://dx.doi.org/10.1111/maps.12628) Sanborn et al. (2015) presented a Δ17O vs. ε54Cr coupled diagram in their analyses of NWA 5958. Utilizing the initial Δ17O value determined by Bunch et al. (2011), along with the 54Cr value determined by Göpel et al. (2013) of +0.973 (± 0.153)—this value being close to the mean for all carbonaceous chondrites—they demonstrated that the meteorite plots in a distinct region (bottom orange circle in diagram below). However, given the new O-isotope value determined by Jacquet et al. (2016) of Δ17O = –4.26‰, the meteorite is within the trend of other carbonaceous chondrite groups (top orange circle in diagram below); NWA 5958 plots slightly below the ungrouped achondriteAn achondrite is a type of stony meteorite whose precursor was of chondritic origin and experienced metamorphic and igneous processes. They have a planetary or differentiated asteroidal origin where the chondritic parent body reached a sufficient size that through heating due to radioactive decay of 26Al (aluminum isotope) and gravitational (CV-clan-related) NWA 7822 (Δ17O = ~ –4‰). 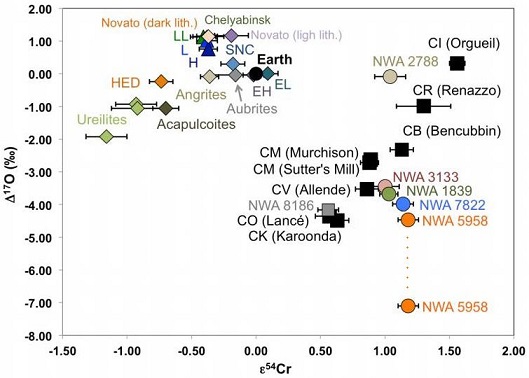 Diagram adapted from Sanborn et al., 46th LPSC, #2259 (2015) The initial bulk chemical and trace elementSubstance composed of atoms, each of which has the same atomic number (Z) and chemical properties. The chemical properties of an element are determined by the arrangement of the electrons in the various shells (specified by their quantum number) that surround the nucleus. In a neutral atom, the number of compositions calculated for NWA 5958 were found to resemble that of CI chondrites, including a high volatileSubstances which have a tendency to enter the gas phase relatively easily (by evaporation, addition of heat, etc.). content, with the 187Os/188Os ratios having the largest value (the most radiogenic) of any measured carbonaceous chondrite (Ash et al., 2011). Subsequent bulk chemical and trace element compositional analyses were conducted by Jacquet et al. (2014). After accounting for the typical altered signature caused by an extended residence in a desert environment, NWA 5958 shows very close similarities to the CM chondriteClass of carbonaceous chondrites named after the Mighei meteorite that fell in Ukraine in 1889. They represent samples of incompletely serpentinized primitive asteroids and have experience extremely complex histories. CM meteorites are generally petrologic level type 2 though a few examples of CM1 and CM1/2 also exist. Compared to CI Paris. Measurement of the Cr2O3 content in chondruleRoughly spherical aggregate of coarse crystals formed from the rapid cooling and solidification of a melt at  ~1400 ° C. Large numbers of chondrules are found in all chondrites except for the CI group of carbonaceous chondrites. Chondrules are typically 0.5-2 mm in diameter and are usually composed of olivine olivine for NWA 5958 is comparable to that for the CO3.03 ALHA77307 and the CM2.7–2.9 Paris, which is indicative of very limited thermal metamorphism at temperatures <300°C. In a study of presolar grainsMineral grains that formed before our solar system. These tiny crystalline grains are typically found in the fine-grained matrix of chondritic (primitive) meteorites. Most grains probably formed in supernovae or the stellar outflows of red giant (AGB) stars before being incorporated in the molecular cloud from which the solar system present in NWA 5958 matrix conducted by Nittler et al. (2012), a small abundance of 13C-rich grains (45 ppmParts per million (106).) and O-anomalous grains (~100 ppm) were identified. The low abundance of O-rich presolar silicates (~50 ppm) observed by Stroud et al. (2014), including an Al,Mg-spinel and an enstatite grain, is thought to be due to loss as a result of parent body hydrothermal alteration. These values suggest a slightly higher degree of hydrothermal metamorphism compared to typical type 3.0 carbonaceous chondrites, more consistent with a type 2. Northwest Africa 5958 is a unique primitive sample from the early solar systemDefinable part of the universe that can be open, closed, or isolated. An open system exchanges both matter and energy with its surroundings. A closed system can only exchange energy with its surroundings; it has walls through which heat can pass. An isolated system cannot exchange energy or matter with, having many characteristics intermediate between CM and CO chondrites. The specimen of NWA 5958 shown above is a 1.62 g crusted fragment, while the image below shows an excellent interior close-up, shown courtesy of Greg Hupé.