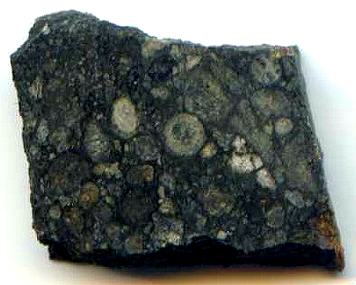 A recent study was undertaken by Bonal et al. (2004, 2006) to refine the subtypes of several CV3 chondritesChondrites are the most common meteorites accounting for ~84% of falls. Chondrites are comprised mostly of Fe- and Mg-bearing silicate minerals (found in both chondrules and fine grained matrix), reduced Fe/Ni metal (found in various states like large blebs, small grains and/or even chondrule rims), and various refractory inclusions (such. They employed several methods to obtain their data, including Raman spectrometry of organicPertaining to C-containing compounds. Organic compounds can be formed by both biological and non-biological (abiotic) processes. material, a petrologic study of Fe zoning in olivineGroup of silicate minerals, (Mg,Fe)2SiO4, with the compositional endpoints of forsterite (Mg2SiO4) and fayalite (Fe2SiO4). Olivine is commonly found in all chondrites within both the matrix and chondrules, achondrites including most primitive achondrites and some evolved achondrites, in pallasites as large yellow-green crystals (brown when terrestrialized), in the silicate portion phenocrysts, presolar grain abundance, and a noble gasElement occurring in the right-most column of the periodic table; also called "inert" gases. In these gases, the outer electron shell is completely filled, making them very unreactive. study. These methods are in contrast to that of TL sensitivity data of feldsparAn alumino-silicate mineral containing a solid solution of calcium, sodium and potassium. Over half the Earth’s crust is composed of feldspars and due to their abundance, feldspars are used in the classification of igneous rocks. A more complete explanation can be found on the feldspar group page. which is typically used to determine subtypes of ordinary chondrites, and which was previously applied to the CV3 chondrites. They suggest that TL sensitivity data are not applicable to aqueously altered carbonaceous chondrites because of loss of feldspars through dissolution, leading to an underestimate of the petrologic subtypes. They have redefined the petrologic subtypes of the common CV3 members as follows:

The differences that exist between these methods of subtype determination are explained by Greenwood et al. (2009) in their study of CV and CK chondriteClass of carbonaceous chondrite named for the Karoonda meteorite that fell in Australia in 1930. They are more oxidized than all other carbonaceous chondrites and genetically distinct from CV chondrites. CK chondrites appear dark-gray or black due to a high percentage of Cr-rich magnetite dispersed in a matrix of dark relationships. They assert that there is a decoupling between the silicateThe most abundant group of minerals in Earth's crust, the structure of silicates are dominated by the silica tetrahedron, SiO44-, with metal ions occurring between tetrahedra). The mesodesmic bonds of the silicon tetrahedron allow extensive polymerization and silicates are classified according to the amount of linking that occurs between the and organic components with respect to measurements involving thermal metamorphism.