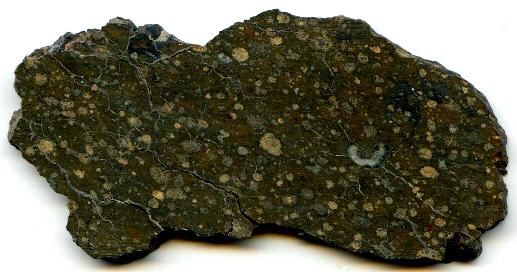 click on photo for a magnified view Found 2009
no coordinates recorded A single 264 g meteoriteWork in progress. A solid natural object reaching a planet’s surface from interplanetary space. Solid portion of a meteoroid that survives its fall to Earth, or some other body. Meteorites are classified as stony meteorites, iron meteorites, and stony-iron meteorites. These groups are further divided according to their mineralogy and was found in Northwest Africa and subsequently purchased by M. Jost of Space Jewels Switzerland. A sample was sent for analysis and classification to the Museum für Naturkunde in Berlin, Germany (A. Greshake), and based on mineralogical analyses NWA 6047 was determined to be a rare unequilibrated CK3 chondriteChondrites are the most common meteorites accounting for ~84% of falls. Chondrites are comprised mostly of Fe- and Mg-bearing silicate minerals (found in both chondrules and fine grained matrix), reduced Fe/Ni metal (found in various states like large blebs, small grains and/or even chondrule rims), and various refractory inclusions (such.

Diagrams credit: Yin et al., 48th LPSC, #1771 (2017) Chromium vs. OxygenElement that makes up 20.95 vol. % of the Earth's atmosphere at ground level, 89 wt. % of seawater and 46.6 wt. % (94 vol. %) of Earth's crust. It appears to be the third most abundant element in the universe (after H and He), but has an abundance only IsotopeOne of two or more atoms with the same atomic number (Z), but different mass (A). For example, hydrogen has three isotopes: 1H, 2H (deuterium), and 3H (tritium). Different isotopes of a given element have different numbers of neutrons in the nucleus. Plot

click on diagram for a magnified view Diagram credit: Sanborn et al., 49th LPSC, #1780 (2018) A petrographic and mineralogical study of NWA 6047 (and other CK3 meteorites) was conducted by Dunn and Gross (2017) to better resolve the group classification, CV vs. CK. They determined that the magnetite composition of NWA 6047 is consistent with that of CV chondrites with respect to Cr2O3, TiO2, NiO, MnO, and CaO abundances; however, the abundance of Al2O3 was found to be lower than that of CV chondrites. They also found that the Fa content in matrix olivineGroup of silicate minerals, (Mg,Fe)2SiO4, with the compositional endpoints of forsterite (Mg2SiO4) and fayalite (Fe2SiO4). Olivine is commonly found in all chondrites within both the matrix and chondrules, achondrites including most primitive achondrites and some evolved achondrites, in pallasites as large yellow-green crystals (brown when terrestrialized), in the silicate portion is most similar to CV chondrites, as are the minor elementSubstance composed of atoms, each of which has the same atomic number (Z) and chemical properties. The chemical properties of an element are determined by the arrangement of the electrons in the various shells (specified by their quantum number) that surround the nucleus. In a neutral atom, the number of abundances with the exception of Cr2O3 (higher than in CV) and MnO (lower than in CV). In addition, the average Fa content of chondrules in NWA 6047 (Fa1.9) is very much lower compared to the FeO-rich chondrules of CK chondrites, but is similar to the chondrule Fa values of CV chondrites. With respect to petrographic observations, they found that the chondrule abundance in NWA 6047 (~30 vol%) is lower than that in CV chondrites (~40 vol%) but higher than that in CK chondrites (~22 vol%). Furthermore, CAIs are present in both NWA 6047 and CV chondrites, but are rare in CK chondrites. Based on the combined results of their analyses, Dunn and Gross (2017) suggest that NWA 6047 be reclassified as CV3ox. In an effort to further resolve differences between the CV and CK chondriteClass of carbonaceous chondrite named for the Karoonda meteorite that fell in Australia in 1930. They are more oxidized than all other carbonaceous chondrites and genetically distinct from CV chondrites. CK chondrites appear dark-gray or black due to a high percentage of Cr-rich magnetite dispersed in a matrix of dark groups, Yin and Sanborn (2019) analyzed Cr isotopes in a significant number and broad range of meteorites. Their study included samples from each of the three CV subgroups (oxA, oxB, Red), two anomalous CV3 (NWA 6047 and NWA 7891), a C3-ungrouped (Ningqiang), several CK members, and other potential CV-related meteorites (see top diagram below). It is demonstrated that the CV and CK meteorites are clearly resolved into two distinct isotopic reservoirs. In addition, it is shown in the top diagram below that the ε54Cr value for NWA 6047 puts it in a distinct location compared to other CV group meteorites, and therefore it may represent a separate carbonaceous chondrite parent body. Furthermore, despite the varied classification history of Ningqiang, it can now be assigned to the CK group. A coupled Δ17O vs. ε54Cr diagram plotting all of the meteorites in the study is shown in the bottom diagram below. Notably, anomalous CV3 NWA 7891 (Δ17O = –7.7 [±4.5] ‰) plots far below the range considered in the bottom diagram. Cr Isotope Weighted Average For CV and CK Chondrites

click on photo for a magnified view Diagrams credit: Yin and Sanborn et al., 50th LPSC, #3023 (2019)
The photo of NWA 6047 shown above is a 6.92 g slice measuring 5 cm across with a small portion of a CAISub-millimeter to centimeter-sized amorphous objects found typically in carbonaceous chondrites and ranging in color from white to greyish white and even light pink. CAIs have occasionally been found in ordinary chondrites, such as the L3.00 chondrite, NWA 8276 (Sara Russell, 2016). CAIs are also known as refractory inclusions since they visible. The photos below show a nice slice of NWA 6047, in the collection of Stephan Kambach, and a photo of the main massLargest fragment of a meteorite, typically at the time of recovery. Meteorites are commonly cut, sliced or sometimes broken thus reducing the size of the main mass and the resulting largest specimen is called the "largest known mass".. The bottom image is an excellent petrographic thin sectionThin slice or rock, usually 30 µm thick. Thin sections are used to study rocks with a petrographic microscope. micrograph of NWA 6047 shown courtesy of Peter Marmet. 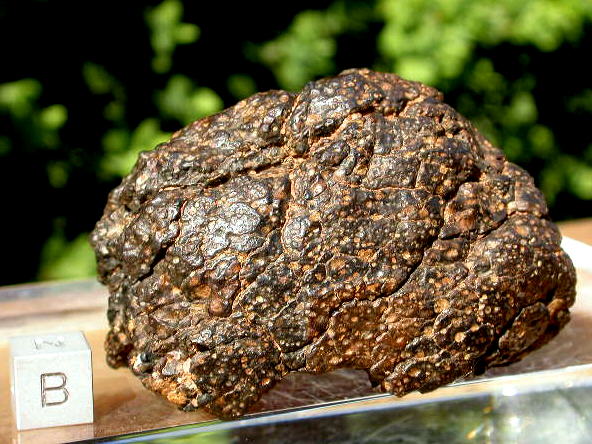 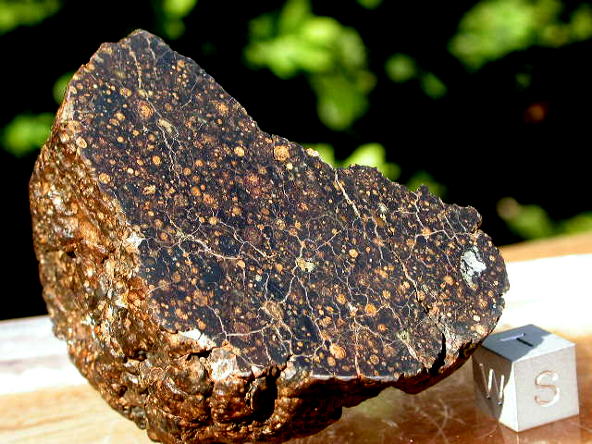