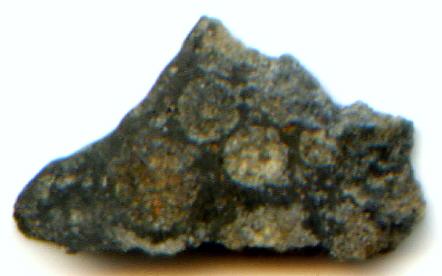 Found 1999
no coordinates recorded A single stone weighing 98 g was purchased by B. Fectay in Tagounite, Morocco in 2000. Initial analysis and classification was conducted at Northern Arizona University (T. Bunch and J. Wittke), and NWA 1152 (syn. Tagounite 084) was determined to be a member of the CV3 chondriteChondrites are the most common meteorites accounting for ~84% of falls. Chondrites are comprised mostly of Fe- and Mg-bearing silicate minerals (found in both chondrules and fine grained matrix), reduced Fe/Ni metal (found in various states like large blebs, small grains and/or even chondrule rims), and various refractory inclusions (such group. Subsequent analyses were conducted at the Natural History Museum, UK, while isotopic analyses were completed at The Open University, UK.