Iron, ungroupedModifying term used to describe meteorites that are mineralogically and/or chemically unique and defy classification into the group or sub-group they most closely resemble. Some examples include Ungrouped Achondrite (achondrite-ung), Ungrouped Chondrite (chondrite-ung), Ungrouped Iron (iron-ung), and Ungrouped Carbonaceous (C-ung).
(silicated, possibly unique member of CR chondriteClass named for the Renazzo meteorite that fell in Italy in 1824, are similar to CMs in that they contain hydrous silicates, traces of water, and magnetite. The main difference is that CRs contain Ni-Fe metal and Fe sulfide that occurs in the black matrix and in the large chondrules clan) 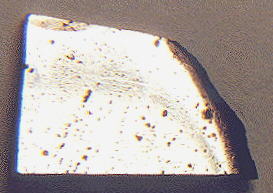 Found 1845
31° 51′ N., 110° 58′ W. Two masses of the Tucson meteoriteWork in progress. A solid natural object reaching a planet’s surface from interplanetary space. Solid portion of a meteoroid that survives its fall to Earth, or some other body. Meteorites are classified as stony meteorites, iron meteorites, and stony-iron meteorites. These groups are further divided according to their mineralogy and were found, the ring-shaped Irwin–Ainsa mass and the paired, slab-shaped, Carleton mass. No fusion crustMelted exterior of a meteorite that forms when it passes through Earth’s atmosphere. Friction with the air will raise a meteorite’s surface temperature upwards of  4800 K (8180 °F) and will melt (ablate) the surface minerals and flow backwards over the surface as shown in the Lafayette meteorite photograph below. or heat-affected zone remains on either mass. The meteorites consist of a refractory and reducedOxidation and reduction together are called redox (reduction and oxidation) and generally characterized by the transfer of electrons between chemical species, like molecules, atoms or ions, where one species undergoes oxidation, a loss of electrons,  while another species undergoes reduction, a gain of electrons. This transfer of electrons between reactants mixture of fine-grained, Si–Cr-bearing FeNi-metal (92 vol%) and nearly alkali-free silicates (8 vol%), both having a nebular rather than an igneous origin; the FeNi-metal is considered to have condensed first.

click on image for a magnified view Diagram credit: Ebert et al., 81st MetSoc, #6246 (2018) A History Revealed Each of the Tucson masses has a unique convoluted history. The first recovered and the largest of the two is the 1,400 pound (688 kg) ring-shaped mass, alternately called the Ring, Signet, Ainsa, and Irwin–Ainsa Meteorite at various times in history. The other mass, originally weighing 633 pounds (287 kg), is named the Carleton Meteorite for the Civil War general who appropriated the piece for public display. The first written description of the Ring dates back to 1845. It was written in Spanish by a respected official of Sonora, Mexico, named José Velasco. From a section of his treatise concerning the state of Sonora, titled Mines of Iron, Lead, Copper, and Quicksilver, he described a mountain pass (known today as Box Canyon) within the Sierra de la Madera range (now the Santa Rita Mountains). This pass, located between Tucson and Tubac, contained many large masses of pure iron, lying at the foot of the mountains. He wrote of a medium-sized mass that was taken to Tucson, a journey of over thirty rugged miles, where it had resided for many years [before 1845], serving as an anvil for the garrison armorer/blacksmith. Writing in his diary for May 31, 1849, the ’49er A. Clarke clearly described the findMeteorite not seen to fall, but recovered at some later date. For example, many finds from Antarctica fell 10,000 to 700,000 years ago. circumstances and provided details of the appearance of the meteorite anvil used by the shoer of his mule. Shortly thereafter, in his article of 1852, Notice of Meteoric Iron in the Mexican Province of Sonora, Dr. John LeConte described the appearance and recovery information of two meteoric anvils being used by blacksmiths in Tucson. That same year, in his diary entry for July 17, boundary commissioner John Bartlett described the origin and dimensions of the Ring mass and alluded to a second large mass located within the garrison in Tucson. He also made a detailed sketch of the celestial anvil, brought to light only in 1978. Perhaps the most thorough description of the two masses was written by John Parke, lieutenant in charge of a survey expedition. He indicated that with much effort some small samples were acquired and sent to the east for analysis. An analysis was performed by Dr. Charles Shepard and published in 1854 in the American Journal of Science. He reported the lack of crustOutermost layer of a differentiated planet, asteroid or moon, usually consisting of silicate rock and extending no more than 10s of km from the surface. The term is also applied to icy bodies, in which case it is composed of ices, frozen gases, and accumulated meteoritic material. On Earth, the and the oxidizedOxidation and reduction together are called redox (reduction and oxidation) and generally characterized by the transfer of electrons between chemical species, like molecules, atoms or ions, where one species undergoes oxidation, a loss of electrons,  while another species undergoes reduction, a gain of electrons. This transfer of electrons between reactants nature of the meteorite sample, along with its chemical composition. It was a blacksmith named Ramón Pacheco, who recovered the slab-like mass on or about 1850, and put it to use as an anvil in Tucson. In 1856, the other blacksmith anvil, the Ring, was abandoned leaving all the blacksmith duties to Pacheco and his anvil. In 1862, Colonel James Carleton confiscated the Pacheco anvil and had it shipped to San Francisco where permission was obtained to saw off a specimen for analysis. The mass remained on display at the Society of California Pioneers until 1939 when it was purchased by the Smithsonian to be displayed alongside the Ring mass. During the year 1860, a medical officer named Bernard Irwin found the abandoned Ring mass and took possession of it on behalf of the Smithsonian. The following year, the meteorite was contracted to begin its journey from Arizona to Washington D.C. via Guaymas by Augustin Ainsa. He took two years to haul the mass to the coast, where his brother, Santiago Ainsa, took over the remaining leg to New York. Santiago was primarily interested in glorifying the family name and contrived a false history of the Ring mass in correspondence with the Smithsonian. In part, he claimed the mass was recovered by his famous great grandfather, Juan Bautista de Anza, in 1735 at a known location, and transported to Tucson. This legend, along with his other claims, have been proven to be totally fabricated; but not before the credit for the presentation of the Ring Meteorite to the Smithsonian was given to the Ainsas, including naming the Ring meteorite the Ainsa Meteorite. When Irwin learned of this appalling turn of events, he sent a letter to the Smithsonian, debunking Ainsa’s fabricated story and protesting their choice of names for the mass. He stated he would rather they rename it the Tucson Meteorite rather than honor the fraudulent claims of Santiago Ainsa. After all, the Ainsas had only contracted to carry it to Washington for Irwin, the original donator to the Smithsonian. The name was subsequently changed to the Irwin–Ainsa Meteorite, but Irwin was intent on removing the name of Ainsa from the meteorite and publishing the correct history of the mass. It took twelve years for the name to be changed at Irwin’s insistence to the Tucson Meteorite. The 3.6 g specimen pictured above was originally part of the inner nodule of the ring mass, and shows a polycrystalline structure with flow patterns of silicate inclusions. The Tucson Ring can be viewed today at the Smithsonian National Museum of Natural History in the Hall of Geology, Gems, and Minerals. Portions above excerpted from The Tucson Meteorites by Richard R. Willey (1987) 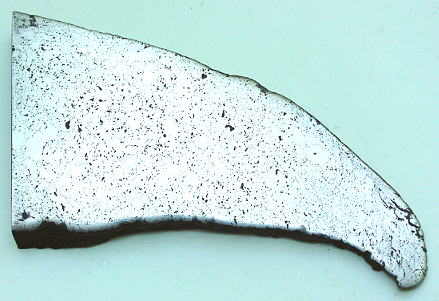