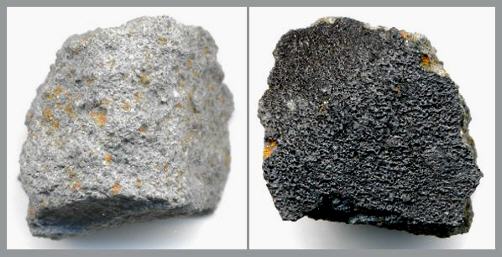 On Friday, July 14 at 10:15 A.M., a fireballA fireball is another term for a very bright meteor, generally brighter than magnitude -4, which is about the same magnitude of the planet Venus as seen in the morning or evening sky. A bolide is a special type of fireball which explodes in a bright terminal flash at its end, often with visible fragmentation. traveling in a north-northwest direction exploded over the town of Moss, Norway, in the county of Ostfold, located about 50 km south of Oslo on the east side of Oslofjord. The fallMeteorite seen to fall. Such meteorites are usually collected soon after falling and are not affected by terrestrial weathering (Weathering = 0). Beginning in 2014 (date needs confirmation), the NomComm adopted the use of the terms "probable fall" and "confirmed fall" to provide better insight into the meteorite's history. If was accompanied by a loud explosion and thunderous rumblings, and numerous calls and reports were made by eyewitnesses to the event. A clear signal was picked up at the Norwegian Seismic Array (NORSAR) in Kjeller, Norway. MeteoriteWork in progress. A solid natural object reaching a planet’s surface from interplanetary space. Solid portion of a meteoroid that survives its fall to Earth, or some other body. Meteorites are classified as stony meteorites, iron meteorites, and stony-iron meteorites. These groups are further divided according to their mineralogy and fragments fell over a wide area. In the vicinity of Rygge, located ~6 km southeast of Moss, the sounds were heard by Ragnar Martinsen as he occupied the outhouse behind his holiday cabin. As he exited, he heard a whistling sound followed by the clatter made by a 36.7 g stone hitting a corrugated metal sheet lying just 2 m away. He contacted astronomers from the Astrophysics Institute of the University of Oslo and from the Norwegian Astronomical Society and invited them to his cabin for their educated opinions of his find—they agreed it was a chondritic meteorite. On Monday, July 17, with intentions of mowing his lawn, Frode Johansen of Moss, Norway discovered a 752 g stone lodged in a 7 cm-deep hole beneath his plum tree; three broken branches attest to its flight path. The family expressed their intensions to donate the meteorite to the Museum of Natural History in Oslo. On Wednesday, July 19, a large, partially-crusted fragment was found by a local resident northwest of the Johansen findMeteorite not seen to fall, but recovered at some later date. For example, many finds from Antarctica fell 10,000 to 700,000 years ago.. After reading about the search for the meteorite in the newspaper, he contacted meteorite hunters Michael Mazur and Bjorn Sorheim of Norway. On Sunday, July 23, the resident met with them to show them a fragment of the fall and to share details of the find location. Subsequently, Michael and Bjorn recovered additional fragments from the original 1.5 kg stone that had shattered upon impact with a fence. On Sunday evening, July 30, Morten Bilet and Michael Farmer were searching near Moss for additional pieces from this fall. They found ~800 g of fragments that had been strewn about following the impact of a single stone on concrete. Some fragments were found in pristine condition up to 20 m away from the point of impact. On Friday, August 4, a 676 g stone was found which had fallen part way through the roof of a storage warehouse belonging to the Norgesgruppen business in Moss. It had punched a 10-cm hole through the roofing material and was lodged within. Its discovery was made only after rainwater leaked through the hole that it had created. This particular stone is a natural fit to the Johansen stone, and likewise has been donated to the Museum of Natural History in Oslo.