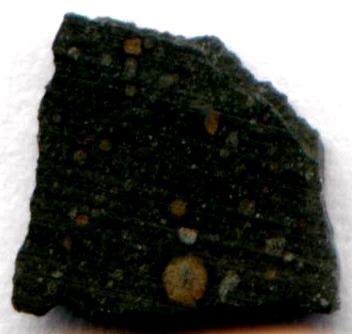 Purchased 2012
Eight fragments of a single meteoriteWork in progress. A solid natural object reaching a planet’s surface from interplanetary space. Solid portion of a meteoroid that survives its fall to Earth, or some other body. Meteorites are classified as stony meteorites, iron meteorites, and stony-iron meteorites. These groups are further divided according to their mineralogy and having a combined weight of 38 g were found in the desert region of Northwest Africa. The pieces were sold at the 2013 Tucson Gem and MineralInorganic substance that is (1) naturally occurring (but does not have a biologic or man-made origin) and formed by physical (not biological) forces with a (2) defined chemical composition of limited variation, has a (3) distinctive set of of physical properties including being a solid, and has a (4) homogeneous Show to G. Hupé. A type sample was submitted for analyses and classification to the University of Washington at Seattle (A. Irving and S. Kuehner), and NWA 7821 was determined to be a new ungroupedModifying term used to describe meteorites that are mineralogically and/or chemically unique and defy classification into the group or sub-group they most closely resemble. Some examples include Ungrouped Achondrite (achondrite-ung), Ungrouped Chondrite (chondrite-ung), Ungrouped Iron (iron-ung), and Ungrouped Carbonaceous (C-ung). C2 chondriteChondrites are the most common meteorites accounting for ~84% of falls. Chondrites are comprised mostly of Fe- and Mg-bearing silicate minerals (found in both chondrules and fine grained matrix), reduced Fe/Ni metal (found in various states like large blebs, small grains and/or even chondrule rims), and various refractory inclusions (such, or alternatively, an anomalous member of the CM chondriteClass of carbonaceous chondrites named after the Mighei meteorite that fell in Ukraine in 1889. They represent samples of incompletely serpentinized primitive asteroids and have experience extremely complex histories. CM meteorites are generally petrologic level type 2 though a few examples of CM1 and CM1/2 also exist. Compared to CI group.

Northwest Africa 7821 is a low-density carbonaceous chondriteCarbonaceous chondrites represent the most primitive rock samples of our solar system. This rare (less than 5% of all meteorite falls) class of meteorites are a time capsule from the earliest days in the formation of our solar system. They are divided into the following compositional groups that, other than containing scattered granular chondrulesRoughly spherical aggregate of coarse crystals formed from the rapid cooling and solidification of a melt at  ~1400 ° C. Large numbers of chondrules are found in all chondrites except for the CI group of carbonaceous chondrites. Chondrules are typically 0.5-2 mm in diameter and are usually composed of olivine ranging in size from 0.1 to 0.4 mm. CAIsSub-millimeter to centimeter-sized amorphous objects found typically in carbonaceous chondrites and ranging in color from white to greyish white and even light pink. CAIs have occasionally been found in ordinary chondrites, such as the L3.00 chondrite, NWA 8276 (Sara Russell, 2016). CAIs are also known as refractory inclusions since they are present in a fine-grained matrixFine grained primary and silicate-rich material in chondrites that surrounds chondrules, refractory inclusions (like CAIs), breccia clasts and other constituents. having a composition similar to that of CM chondritesChondrites are the most common meteorites accounting for ~84% of falls. Chondrites are comprised mostly of Fe- and Mg-bearing silicate minerals (found in both chondrules and fine grained matrix), reduced Fe/Ni metal (found in various states like large blebs, small grains and/or even chondrule rims), and various refractory inclusions (such. The meteorite has been shocked to S2 and terrestrially weathered to a grade of W2. On an oxygenElement that makes up 20.95 vol. % of the Earth's atmosphere at ground level, 89 wt. % of seawater and 46.6 wt. % (94 vol. %) of Earth's crust. It appears to be the third most abundant element in the universe (after H and He), but has an abundance only three-isotope diagram, NWA 7821 plots along the CM trend line for CM chondrites but with a higher than normal 16O content (Carnegie Institution, Washington D.C. (D. Rumble, III; see O-isotopic diagram). The specimen of NWA 7821 shown above is a 0.056 g partial slice. The photo shown below is one of the larger slices photographed by G. Hupé. 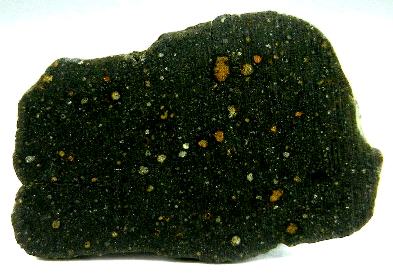