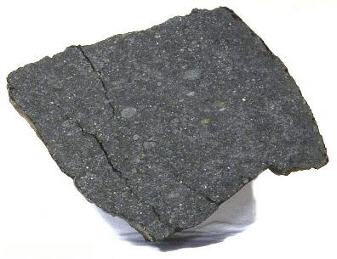 click on photo for a magnified view Purchased 2006
no coordinates recorded A single, partially crusted meteoriteWork in progress. A solid natural object reaching a planet’s surface from interplanetary space. Solid portion of a meteoroid that survives its fall to Earth, or some other body. Meteorites are classified as stony meteorites, iron meteorites, and stony-iron meteorites. These groups are further divided according to their mineralogy and fragment weighing 42 g (19 g recorded for NWA-series designation) was found in Northwest Africa, and a portion was sold through A. Habibi to meteorite collector S. Ralew in Erfoud, Morocco. A type specimen was submitted for analysis and classification to the Museum für Naturkunde (A. Greshake and M. Kurz), and it was determined that NWA 4765 is a CM1 carbonaceous chondriteCarbonaceous chondrites represent the most primitive rock samples of our solar system. This rare (less than 5% of all meteorite falls) class of meteorites are a time capsule from the earliest days in the formation of our solar system. They are divided into the following compositional groups that, other than, the first of its kind to be found outside of Antarctica. An analysis of the O-isotopes was conducted by the Open University (Franchi and Greenwood).

This meteorite has been exposed to extensive parent-body aqueous alteration, and all maficOne of the two broad categories of silicate minerals, the other being felsic, based on its magnesium (Mg) and/or iron (Fe) content. Mafic indicates silicate minerals that are predominantly comprised of Mg and/or Fe.The term is derived from those major constituents: Magnesium + Ferrum (Latin for iron) + ic (having silicates have been converted to phyllosilicatesClass of hydroxyl-bearing silicate minerals with a sheet-like structure. They result from aqueous alteration are dominantly serpentine and smectite in meteorites; found in the matrixes of carbonaceous chondrites. Phyllosilicates consist of repeating sequences of sheets of linked tetrahedra (T) and sheets of linked octahedra (O). The T sheet consists of. ChondrulesRoughly spherical aggregate of coarse crystals formed from the rapid cooling and solidification of a melt at  ~1400 ° C. Large numbers of chondrules are found in all chondrites except for the CI group of carbonaceous chondrites. Chondrules are typically 0.5-2 mm in diameter and are usually composed of olivine have been severely altered and converted to pseudomorphs composed of phyllosilicate, while various secondary mineralsMineral that forms through processes such as weathering, and in the case of meteorites can also include pre-terrestrial alteration. Secondary minerals in meteorites that formed during terrestrial weathering include oxides and hydroxides formed directly from metallic Fe-Ni by oxidation, phosphates formed by the alteration of schreibersite, and sulfates formed by such as carbonates and pyrrhotiteIron sulfide group of minerals whose composition ranges widely between its end members pyrrhotite (Fe7S8) whose crystal structure is monoclinic, and troilite (FeS) whose crystal structure is hexagonal. Its general formula is Fe1−xS (where x = 0 to 0.17). The troilite phase is found mainly in meteorites and in the are now abundant. Fine-grained accretionary rims, considered by some to be rims formed after parent bodyThe body from which a meteorite or meteoroid was derived prior to its ejection. Some parent bodies were destroyed early in the formation of our Solar System, while others like the asteroid 4-Vesta and Mars are still observable today. accretionAccumulation of smaller objects into progressively larger bodies in the solar nebula leading to the eventual formation of asteroids, planetesimals and planets. The earliest accretion of the smallest particles was due to Van der Waals and electromagnetic forces. Further accretion continued by relatively low-velocity collisions of smaller bodies in the through impact-compaction of fine-grained, porous matrixFine grained primary and silicate-rich material in chondrites that surrounds chondrules, refractory inclusions (like CAIs), breccia clasts and other constituents. material (Trigo-Rodriguez et al., 2006), surround some discrete coarse-grained objects. Aqueous alteration processes also contributed to the replacement of meliliteGroup of minerals found in the CAIs of meteorites such as CV chondrites. Melilite consists almost exclusively of the binary solid solution gehlenite (Ca2Al2SiO7) – åkermanite (Ca2MgSi2O7). The melilite in CAIs is closer to gehlenite in composition. The first-formed (highest-temperature) melilite crystallizing from a melt is relatively aluminum-rich and becomes progressively with phyllosilicate in refractory inclusionsInclusions found predominantly in carbonaceous chondrites and are rich in refractory elements particularly calcium, aluminum and titanium that in various combinations form minerals such as spinel, melilite, perovskite and hibonite. There are two types of refractory inclusion: • Ca Al-rich inclusions (CAIs) • Amoeboid olivine aggregates (AOAs) Refractory inclusions were, and to the subsequent disruption of the inclusions (Rubin, 2007). Northwest Africa 4765 has experienced a low degree of shock and exhibits minor terrestrial weathering. The degree to which various CM chondritesChondrites are the most common meteorites accounting for ~84% of falls. Chondrites are comprised mostly of Fe- and Mg-bearing silicate minerals (found in both chondrules and fine grained matrix), reduced Fe/Ni metal (found in various states like large blebs, small grains and/or even chondrule rims), and various refractory inclusions (such have been aqueously altered has been determined through such factors as the water/rock ratio, the temperature, and the duration of the alteration process. A new aqueous alteration sequence for CM chondrites was proposed by Rubin et al. (2005, 2007) due to the fact that chondruleRoughly spherical aggregate of coarse crystals formed from the rapid cooling and solidification of a melt at  ~1400 ° C. Large numbers of chondrules are found in all chondrites except for the CI group of carbonaceous chondrites. Chondrules are typically 0.5-2 mm in diameter and are usually composed of olivine pseudomorphs are present in the least altered CM members. The most altered members, previously classified as CM1, will become CM2.0, with the less altered members proportionately increasing in petrologic typeMeasure of the degree of aqueous alteration (Types 1 and 2) and thermal metamorphism (Types 3-6) experienced by a chondritic meteorite. Type 3 chondrites are further subdivided into 3.0 through 3.9 subtypes. up to CM2.6; lower degrees of aqueous alteration have not been identified in the CM group thus far. Based on eight major diagnostic parameters of progressive alteration, the team classified many CM chondrites while invoking a hypothetical precursor lithology having a petrologic type of 3.0. This precursor lithology is broadly similar to the anhydrous, ungroupedModifying term used to describe meteorites that are mineralogically and/or chemically unique and defy classification into the group or sub-group they most closely resemble. Some examples include Ungrouped Achondrite (achondrite-ung), Ungrouped Chondrite (chondrite-ung), Ungrouped Iron (iron-ung), and Ungrouped Carbonaceous (C-ung). (probably CO-related; Simon and Grossman, 2015), type 3.0 Acfer 094, or perhaps the CO3.0 ALHA77307. Following are the major parameters developed by Rubin et al. (2007), Rubin (2007), and de Leuw et al. (2008) for estimating the degree of alteration of the CM chondrites: early to intermediate stage alteration processes:

Current studies suggest that both cometary dust and meteorites should be produced from the disruption of Jupiter-family comets which originate in the Kuiper beltRegion in the outer solar system beyond Neptune's orbit that contains billions of small, icy planetesimals from the original protoplanetary disc that failed to coalesce into planets. The Kuiper Belt extends from Neptune's orbit at 30 AU to ~55 AU. It is ~20x wider and 20-200x more massive than the. Studies have shown that Antarctic micrometeorites have a similar carbonaceous chondriteChondrites are the most common meteorites accounting for ~84% of falls. Chondrites are comprised mostly of Fe- and Mg-bearing silicate minerals (found in both chondrules and fine grained matrix), reduced Fe/Ni metal (found in various states like large blebs, small grains and/or even chondrule rims), and various refractory inclusions (such:ordinary chondriteWork in Progress Ordinary chondrites (OCs) are the largest meteorite clan, comprising approximately 87% of the global collection and 78% of all falls (Meteoritical Society database 2018)1. Meteorites & the Early Solar System: page 581 section 6.1 OC of type 5 or 6 with an apparent shock stage of S1, ratio ((~7:1) as the composition of zodiacal dust (Meier, 2014). Based on observational evidence and current modeling, it is thought that comets should be dark in color and have a low densityMass of an object divided by its volume. Density is a characteristic property of a substance (rock vs. ice, e.g.). Some substances (like gases) are easily compressible and have different densities depending on how much pressure is exerted upon them. The Sun is composed of compressible gases and is much and strength, a high porosityThe volume percentage of a rock that consists of void space. Vesicular porosity is a type of porosity resulting from the presence of vesicles, or gas bubbles, in igneous rock such as the pumice presented here. Vesicular porosity is very rare in meteorites and is often associated with slag, one, a solar ratio of elements, an elevated ratio of C, H, O, and N, a high interstellar grain content, anhydrous and highly unequilibrated silicates, few to no chondrules, and a low cosmic-ray exposure ageTime interval that a meteoroid was an independent body in space. In other words, the time between when a meteoroid was broken off its parent body and its arrival on Earth as a meteorite - also known simply as the "exposure age." It can be estimated from the observed effects (<10 m.y.). Both the CI and CM groups of meteorites exhibit characteristics that are consistent with the above descriptions. Orbital data obtained from several carbonaceous chondrites (e.g., CI OrgueilA large carbonaceous Ivuna-like (CI1) chondrite that disintegrated and fell in fragments near the French town of Orgueil on May 14, 1864. About 20 pieces, totaling ~12 kg in mass, were subsequently recovered from an area of several square km, some head-sized but most were smaller than a fist. Specimens [eyewitness plotting]; CMs Maribo and Sutter’s Mill [instrument recording]) are a good match to the orbits expected from the disruption of Jupiter-family comets, but are unlike the orbits of ordinary chondrites and most other asteroidal objects (Meier, 2014). Both the orbital eccentricityThe deviation of an orbit from circularity. Circles have eccentricities of 0. and semimajor axis for Maribo is nearly identical to those of CometConglomeration of frozen water and gases (methane, ammonia, CO2) and silicates that that formed in the outer solar system and orbits the Sun. In recent years, the description of comets has shifted from dirty snowballs to snowy dirtballs with more dust than ice. However, the ratio is less than 10-to-1. Encke and the associated Taurid swarm of objects (Haack et al., 2011). On the other hand, a CRE age study of CM chondrites conducted by Meier et al. (2016) shows a possible relationship exists to the asteroid breakup event ~8.3 m.y. ago that formed the Ch/C/Cg-type members of the Veritas family. In addition to the large abundance of 3He-enriched interplanetary dust discovered in 8.2 m.y.-old deep-sea drill cores, ~1/6 of all CM meteorites have 21Ne-based CRE ages that are consistent with derivation from this catastrophic breakup, while others with significantly younger CRE ages could represent secondary collisions among the Veritas fragments. Based on reflectance spectra in the range of 0.4 to 2.4 μm captured by the OSIRIS-REx spacecraft, as well as utilizing meteorite analogs, it has been speculated that asteroid (101955) 1999 RQ36 is composed of CM1-like material. Further details of the formation of CM chondrites can be found on the Murchison page. The specimen of NWA 4765 shown above is a 0.8 g partial slice. A photo of the main massLargest fragment of a meteorite, typically at the time of recovery. Meteorites are commonly cut, sliced or sometimes broken thus reducing the size of the main mass and the resulting largest specimen is called the "largest known mass". is shown below. 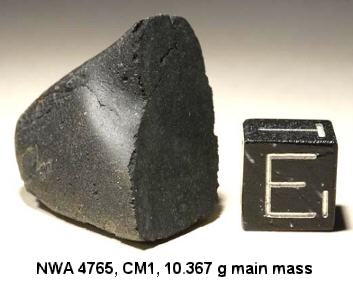 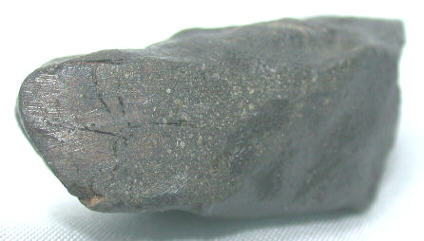 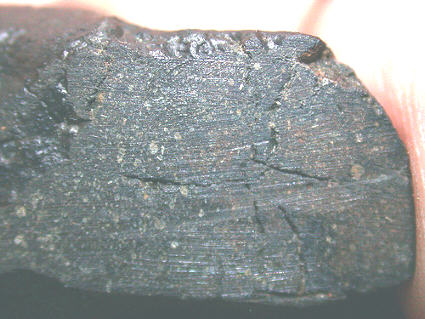 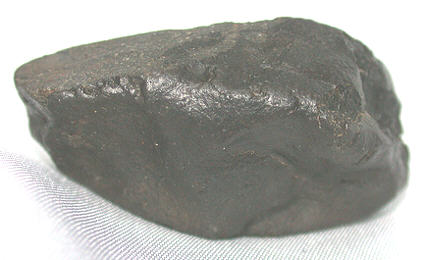 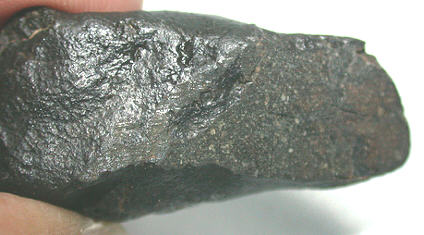