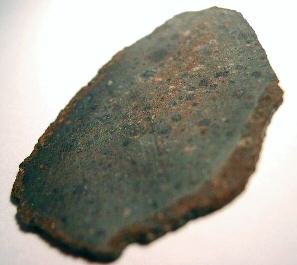 Purchased January 1999
30° 37′ N., 4° 07′ W. Several pieces of this meteoriteWork in progress. A solid natural object reaching a planet’s surface from interplanetary space. Solid portion of a meteoroid that survives its fall to Earth, or some other body. Meteorites are classified as stony meteorites, iron meteorites, and stony-iron meteorites. These groups are further divided according to their mineralogy and having a combined weight of 161 g were purchased in Zagora, Morocco by American collector A. Lang. Northwest Africa 735 was classified by Dr. T. Mickouchi at the University of Tokyo as a CK4 carbonaceous chondriteCarbonaceous chondrites represent the most primitive rock samples of our solar system. This rare (less than 5% of all meteorite falls) class of meteorites are a time capsule from the earliest days in the formation of our solar system. They are divided into the following compositional groups that, other than with a shock stageA petrographic assessment, using features observed in minerals grains, of the degree to which a meteorite has undergone shock metamorphism. The highest stage observed in 25% of the indicator grains is used to determine the stage. Also called "shock level".               of S3. Heavy weathering consistent with a W3 on the Wlotzka weathering scale (1993) has obscured many of the chondrulesRoughly spherical aggregate of coarse crystals formed from the rapid cooling and solidification of a melt at  ~1400 ° C. Large numbers of chondrules are found in all chondrites except for the CI group of carbonaceous chondrites. Chondrules are typically 0.5-2 mm in diameter and are usually composed of olivine in this meteorite. A more useful weathering index (wi) was developed by Rubin and Huber (2005) for the highly oxidizedOxidation and reduction together are called redox (reduction and oxidation) and generally characterized by the transfer of electrons between chemical species, like molecules, atoms or ions, where one species undergoes oxidation, a loss of electrons,  while another species undergoes reduction, a gain of electrons. This transfer of electrons between reactants meteorites of the more equilibrated CV members and the R chondriteChondrites are the most common meteorites accounting for ~84% of falls. Chondrites are comprised mostly of Fe- and Mg-bearing silicate minerals (found in both chondrules and fine grained matrix), reduced Fe/Ni metal (found in various states like large blebs, small grains and/or even chondrule rims), and various refractory inclusions (such group. This index is based on the modal abundance of brown-stained silicates as visually determined on a thin sectionThin slice or rock, usually 30 µm thick. Thin sections are used to study rocks with a petrographic microscope. in transmitted light at ~100× magnification.

Meteorites in the CK group were generally classified as such based on their lower abundances of refractory lithophile elements and their lack of CAIsSub-millimeter to centimeter-sized amorphous objects found typically in carbonaceous chondrites and ranging in color from white to greyish white and even light pink. CAIs have occasionally been found in ordinary chondrites, such as the L3.00 chondrite, NWA 8276 (Sara Russell, 2016). CAIs are also known as refractory inclusions since they and coarse-grained rims around chondrules compared to members of the CV group. After in-depth analyses of many CV and CK meteorites having a wide range of petrologic types was conducted by Wasson et al. (2013), they presented a reasoned argument for merging the CK and CV groups into a single unified group. The geochemical and petrological justification for such a reclassification of the CK chondritesChondrites are the most common meteorites accounting for ~84% of falls. Chondrites are comprised mostly of Fe- and Mg-bearing silicate minerals (found in both chondrules and fine grained matrix), reduced Fe/Ni metal (found in various states like large blebs, small grains and/or even chondrule rims), and various refractory inclusions (such, along with details of their proposed taxonomic scheme, can be found on the Dhofar 015 page. Subsequent studies have demonstrated a high likelihood for separate parent bodies. One such study conducted by Dunn et al. (2016) compared magnetiteFe oxide, Fe2+Fe3+2O4, containing oxidized iron (Fe3+) found in the matrix of carbonaceous chondrites and as diagnostic component in CK chondrites. In CK chondrites, magnetite is typically chromian, containing several wt. % Cr2O3. in a number of CK and CV chondritesMeteorite class named after the Vigarano meteorite that fell in Italy in 1910. They have abundant large, well-defined rimless (?) chondrules of magnesium-rich olivine (~0.7 mm diameter; 40-65 vol. %), often surrounded by iron sulfide. They also contain 7-20 vol. % CAIs. The often dark-gray matrix is dominated by Fe-rich. They presented geochemical, mineralogical, and petrographic evidence which is more consistent with separate CV and CK parent bodies. Another study conducted by Yin et al. (2017) utilized a coupled Δ17O vs. ε54Cr diagram to plot several CK and CV chondrites. Through this technique they demonstrated that these two meteorite groups derive from separate parent bodies. Details of these studies can also be found on the Dhofar 015 page. The photo above shows a 3.69 g slice of NWA 735.