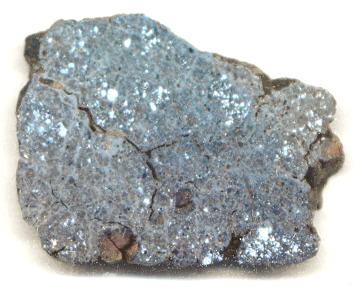 Purchased October 2006
no coordinates recorded A single highly weathered stone weighing 181 g was found in Northwest Africa. The stone was acquired by Moroccan meteoriteWork in progress. A solid natural object reaching a planet’s surface from interplanetary space. Solid portion of a meteoroid that survives its fall to Earth, or some other body. Meteorites are classified as stony meteorites, iron meteorites, and stony-iron meteorites. These groups are further divided according to their mineralogy and dealer A. Habibi, and thereafter, sold to the Polish Meteorite Laboratory. Analyses of individual samples of this meteorite, conducted at both Northern Arizona University (T. Bunch) and the Muséum National d’Histoire Naturelle, Paris (M. Denise), resulted in a classification for NWA 4781 of CH3 chondrite.

John Kashuba’s excellent webpage on NWA 4781, utilizing petrographic thin sectionThin slice or rock, usually 30 µm thick. Thin sections are used to study rocks with a petrographic microscope. views and descriptions, can be seen here. Further information about the CH group can be found on the Acfer 214 page. The specimen of NWA 4781 pictured above is a 1.45 g partial slice. The photo below shows the ‘dinosaur-skin’ texture of the fusion crustMelted exterior of a meteorite that forms when it passes through Earth’s atmosphere. Friction with the air will raise a meteorite’s surface temperature upwards of  4800 K (8180 °F) and will melt (ablate) the surface minerals and flow backwards over the surface as shown in the Lafayette meteorite photograph below. sculptured by extensive terrestrial weathering, consistent with grade W4, along with a slice below. 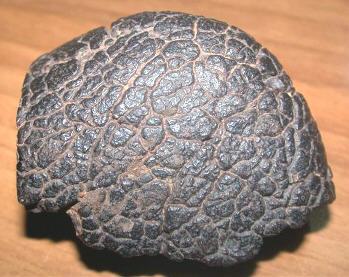 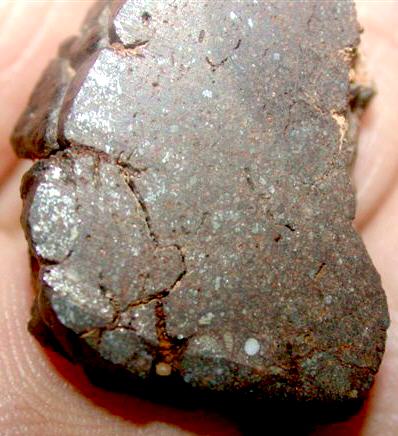 Photo courtesy of A. Habibi For additional information on CH chondriteRare carbonaceous chondrite class that is chemically very close to the CRs and CBs as evidenced by the CH/CBb meteorite Isheyevo. The "H" stands for "high metal" since the CH chondrites contain up to 15 vol. % Fe-Ni metal. The first CH chondrite was found in the Antarctic Allan Hills petrogenesis, read the PSRD article by G. Jeffrey Taylor: ‘The Oldest Metal in the Solar System‘, Sept. 2000.