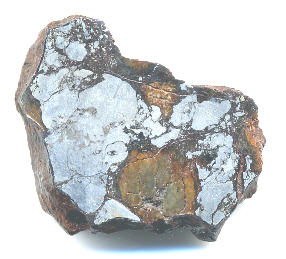 click on photo for a magnified view Purchased August 2005
no coordinates recorded A group of sixty-nine small, paired, stone fragments, having a combined weight of 745.5 g, were recovered in the Sahara Desert by a Moroccan hunter. Further searches of the area have yielded no additional fragments. All of these fragments were subsequently purchased by H. Strufe, and a sample was submitted for analysis to the Museum für Naturkunde, Humboldt University, Berlin, (A. Greshake). Northwest Africa 4025 was classified as a rare CBa bencubbinite. 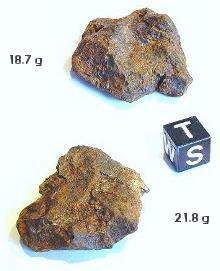